Unknot those twisted panties and listen to yourself.
by Jeannette Maw 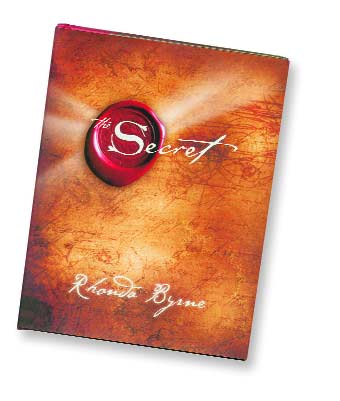 Some say it's hogwash, some call it dangerous, others proclaim it is ageless wisdom that will transform your life. What's up with the Secret?

The stunning popularity of the movie "The Secret" (best selling DVD and book), featured on Oprah, Newsweek and even in our Deseret News) has attracted an enormous number of both fans and critics. Some claim the movie is nothing more than new age packaging of centuries-old snake oil. Others say it's wishful thinking that only benefits the handful of people making money from selling it. Other critics go so far as to say the ideas the movie promotes are downright dangerous if people actually believe them.

The controversy isn't limited to the 2006 movie produced by Australian Rhonda Byrn. Certain authorities in the fields of theology and psychology say the Law of Attraction itself only offers false hope to the desperate and disadvantaged.

What's the truth? Is the Law of Attraction real or hype? How do you know if you're wasting your time and money studying this supposed universal law? Here's how to know the truth, once and for all.

Panties in a twist

First a quick review of the swirl of activity around this topic.

Some take issue that "The Secret" promotes using the Law of Attraction primarily to gain material wealth. They feel this universal principle should be used toward more spiritual undertakings – like becoming a better person, creating world peace and such.

Some (including contributors to the original version of the film) say the movie wasn't complete. Joe Vitale, James Ray and Esther Hicks are quoted as saying the movie didn't tell the whole story about how deliberate creation works.

Still other critics say the whole concept of creating reality according to your thoughts is delirium, and that people who peddle this stuff are preying on the desperation of others who want a quick easy fix to life's inevitable challenges.

A handful of Law of Attraction experts responded publicly to these arguments, which just seems to fuel a bigger fire rather than extinguish it. "Secret" contributor Michael Beckwith says "mediocrity attacks excellence," and that's why so many supporters take heat about today's hottest topic.

Although this may be a hot topic today, it certainly isn't a new one. These manifesting principles have been around for eons, tracing back to roughly 300 B.C. in the mysterious Emerald Tablet. That in itself incites some factions who take issue with the movie producers presenting Law of Attraction as a "secret."

This way to the truth

Some individuals who were followers, practitioners or just generally intrigued by the principles of deliberate creation felt the wind taken out of their sails with the public controversies aired about "The Secret." Where once they felt optimism and excitement about the possibility of deliberate manifesting, some found themselves muttering "I knew it was too good to be true" after reading negative press about the movie.

Regardless of what you did or didn't feel previously about this subject, if you haven't already found your way to the truth, here's a tip. It's not outside of you.

You won't find the answer in a Larry King interview or an online blog. The truth doesn't have anything to do with your husband's opinion, your neighbor's experience, or your coach's two cents' worth.

The only way we can ever know "what's so" is to check in with ourselves. The truth isn't "out there"; rather it's built in. We each have an internal guidance system designed to ensure we have continual access to what's right for each of us. Whether you call it your higher self, God self, intuition or something else, it's in all of us.

You can hear that truth when you listen for it. The beauty of it is that when you recognize that nothing outside of you knows what's best for you, you're no longer subject to the whims, fancies, complaints, ramblings and rantings of others.

Most of us, however, learned early on to ignore our internal guidance in favor of being accepted, making peace, getting along or just plain surviving. We became experts at discounting and even rejecting what our gut tells us, and became reliant on looking outside ourselves for the facts.

Sometimes you'll hear your authentic guidance through signals of your emotions; others feel it more strongly in physical body reactions-like "chill of truth" goose bumps or a sinking stomach. Once you are practiced at hearing (or experiencing) your internal guidance, you're never again left wondering what's valid and what's not.

Could I be wrong? Absolutely. Don't take my word for it; test it out yourself.

Our private truth is speaking to us all the time, pointing "this way" or "that way." All we need to do is hear it and we've got the best experts on board for life.

Listen for it. Play with it. Practice hearing it. See where it takes you. Don't rely on someone else to tell you what's so. You know what's so.

When other people come up with different answers, more power to them. It doesn't mean you're wrong or should question yourself. Your truth doesn't change, no matter how many others hold contrary opinions.

Sometimes outside triggers are great opportunities for us to recognize or confirm what's true for us. For example, when a tarot card reader told me my rocky marriage would stand the test of time, my stomach dropped and I knew in that moment I wanted a divorce. But it was an outside trigger that helped me hear that truth within myself.

The moment my real estate agent showed me into a cute little Rose Park brick house, my heart soared and inner being shouted "Yes!" Even while my girlfriend stood next to me saying "I can't believe we're even looking at this place."

When my coach, who for three months tried to get me to make peace with my lucrative corporate job, finally threw her hands in the air and said "You just have to quit if you hate it so much" – again went the soaring heart and all internal arrows pointing to "yes!" It was the external trigger that helped me hear that internal signal loud and clear.

As far as complaints about "The Secret" movie having too materialistic a focus, everyone's entitled to their opinion. I personally believe the movie hits a good access point to the population at large. Many may very well apply the knowledge gained from "The Secret" to eventually achieve their highest purpose.

The movie may begin with bikes, jewelry and sports cars, but if you stick with it, you see it does move on to happy relationships, physical health and world peace. The technology is the same. You choose how you will apply it.

Regarding whether the Law of Attraction works, I think even the biggest skeptic would agree that thoughts at least affect the way we experience reality; that attitude does make a difference. My personal experience is that thoughts are much more powerful than just that, though. Again, check it out for yourself.

As to those who argue manifesting doesn't work, I think they themselves prove it does. Because when we say "this stuff doesn't work," we can actually manifest that to appear true as well.

Bottom line: Trust yourself to know the truth. You know more than you think you do.

Jeannette Maw is an Attraction Coach and founder of Good Vibe Coaching in Salt Lake City. Your comments are invited at www.catalystmagazine.net or jmaw@goodvibecoach.com.