Your opportunity to help clean up our air is coming up soon.

It’s getting real out there. In October, the United Nations declared that it’s time to take “unprecedented” actions to cut carbon emissions over the next decade. In November, a new federal climate assessment for the U.S. was released stating that changes in temperature and precipitation are increasing health risks from ground-level ozone pollution, Salt Lake’ s new summertime scourge.

It’s easy to be hopeless. But where’s the fun in that?

Drawdown: The Most Comprehensive Plan Ever Proposed to Reverse Global Warming, edited by Paul Hawken, reports 100 scientifically proven ways to reverse, not just slow down, carbon emissions—a main cause of northern Utah’s air pollution problems, along with particulate pollution.

Many of Drawdown’s solutions for drawing down carbon are represented right here in our community, in the areas of energy, food, women and girls, buildings and cities, land use, transport (a huge one for Utah) and materials.

Mass transit, ridesharing, e-vehicles, trains, bike infrastructure—Salt Lake has them all, and you can learn how to use them at CATALYST’s Clean Air Solutions Fair this month. 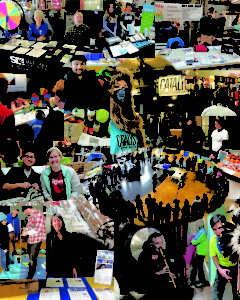 When it comes to reducing carbon emissions, Hawkens’ team shows us that, big and small, personal effort on a large scale pays off, whether it’s teleworking, rooftop solar, regenerative agriculture, methane digesters, LED lighting, household recycling or composting—again, Utah has it all, and you can find  out about many of these at the fair.

We’ll hook you up with local resources to help your indoor air quality, too, as well as take care of your lungs.

Visit our website (www.CatalystMagazine.net/CASF) and Facebook event page to keep up on who’s participating this year and what’s happening in the skill-sharing workshops.

We’re also proud to collaborate with the Utah Recycling Alliance (URA), which will hold a Fix-it Clinic to help you repair all (well, one per person) your broken “toys.”

We recently spoke with Thom Carter, executive director of Utah Clean Air (UCAIR), a major sponsor of our event. He told us about an air quality survey prepared for UCAIR by Lighthouse Research last September. Most of the respondents were in the 25 to 44 age range and traveled fewer than 11 miles to work.

An astounding 76% selected “vehicles” as the biggest or second-biggest contributor to our area’s poor winter air quality, with “industry” trailing at a combined score of 42%.

Also of interest were answers to the unaided question, “Who do you feel is responsible for fixing air quality issues in Utah?” People in general, followed by the state government.

And “What specifically do you feel could be done to improve air quality in Utah?”

The No. 1 answer: “Don’t know.” Followed by ideas ranging from improved public transit to public policy, carpooling, controlling population and development. Respondents’ main reasons for not engaging in certain behaviors were what you’d expect: for instance, not carpooling—no one to carpool with (58%). Not taking transit: Inconvenient locations (52%).

UCAIR is using the survey data to work with the Utah Department of Environmental Quality and the State Legislature. Solutions are already available to many of the problems cited (for instance, carpooling websites and a forthcoming app).

Carter understands the importance of hearing what people think. “Without the help of the general public, we don’t make progress,” he says.

It’s obvious that the time has come when people are realizing individual action plays a part—perhaps more so now that it appears less help will come from the feds.

As Ted Wilson, former Salt Lake City mayor and recently retired head of UCAIR, has been known to say: There are saints, and sinners, and the savable. At this month’s Clean Air Solutions Fair, we want them all. We’ll share, learn, laugh, commiserate, rethink a few things, make new choices, expand our range of possibilities.

Oh, and if you want to consider taking mass transit there, check out several of the stories in this issue for pointers.

See you at the fair!