A chat with owners of the Avenues' newest coffee venue.
by Mandy Jeppsen 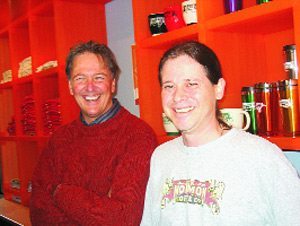 I clearly remember the day I tried my first slice of fresh-baked bread. I was in a Seattle bakery and the flavor and texture of that artisan loaf left a mark on my taste buds forever. After that, I tried to endure thin store slices but nothing compared until I discovered local bakeries in Salt Lake. I have never gone back, my addiction to 'good' bread is sealed forever.

"Customers often get hooked on a cup of our coffee, and that usually leads to the purchase of a pound. Then they might go back to their other place, and realize that it's just not as fresh," says Rowland, who began his career in the coffee business in the early '80s working in bulk coffee and eventually co-founding Texas Coffee Traders in Austin and Lola Savannah Coffee in Houston. He also lived on the Pacific coast of Mexico, where he worked with Indian coffee growers, building a relationship and learning about the coffee trade from a growers' standpoint.

A talented craftsman and builder, he and his wife Sandra Jensen started the E Street Gallery in 2000 after moving to Salt Lake to care for Jensen's ailing parents. But after six years he'd grown tired of isolating himself everyday to build ("I'm not the cloistered type," he says) so he returned to his coffee roots-refitting the gallery into the Jack Mormon Coffee Company.

Rowland enlisted the help of son-in-law Michael Madrid. The two had been roasting at the Farmer's Market, using a nifty one-pound roaster to provide ultra-fresh batches, when Rowland chanced upon an exciting new coffee-making device, the Clover vacuum brewer. The brewer makes a single-cup of coffee combining French press and vacuum brewing methods, creating a superbly fresh cup of coffee. "Eureka," thought Rowland. Coupling fresh beans with the Clover seemed like grounds for opening a coffeehouse. The two also wanted to provide a place for educating consumers about coffee, as well as a place to buy beans.

Jack Mormon Coffee (which got its name as a friendly joke between Rowland and his LDS mother-in-law) is not a place to sit for hours and study. There is one table inside, and Rowland plans to build a few more out front- but the concept is modeled after a bakery. Currently, JMC carries 16 varieties of single-origin beans, with plans to expand to 50. "As opposed to blends, we want to carry beans that stand on their own and make a good cup by themselves," Madrid explains. Each day, he selects a sampling of beans to roast and sell by the pound, but tries only to roast on an as-needed basis. He encourages customers to call in orders ahead of time. "It takes 15 minutes to roast a batch of beans. So people can call in and request their pound, and have it roasted to pick up later that day." Each customer can get a coffee card which tracks purchases and likes and dislikes, making it easy for JMC employees to make suggestions about new beans they might enjoy.

Since opening in December, the Jack Mormon Coffee Company has established a cadre of regulars. They plan to open a Web store soon, so customers can order online and have beans shipped right to their door.

So, whether you are a Jack Mormon or just a lover of fresh coffee, next time you're in the Avenues drop by and try a cup. But buyer beware-it could mean a fresh-bean addiction for you, too.