The caduceus, better known as the medical symbol, with its central staff, entwined snakes and feathered wings on top, looks uncannily similar to the subtle energy system described by the ancient Hindus of India. In this system, seven chakras (or energy centers) are aligned along a vertical column which parallels the spine. Two more subtle energy currents form helical spirals crossing at each chakra, ending at the crown chakra, which is symbolized by a thousand petaled lotus.

It is through this system that the kundalini, the energy of the coiled serpent, is said to rise as one progresses toward enlightenment.

You may be surprised to learn, however, that the caduceus is not the original or technically correct medical symbol. In Western medicine, this symbol was originally the staff of Asclepius, which is forked at the top and encircled by only one serpent, not two. Asclepius, the Greek god of medicine, was killed by a thunderbolt from Zeus because Zeus was afraid that such a skillful physician might have made all humans immortal. 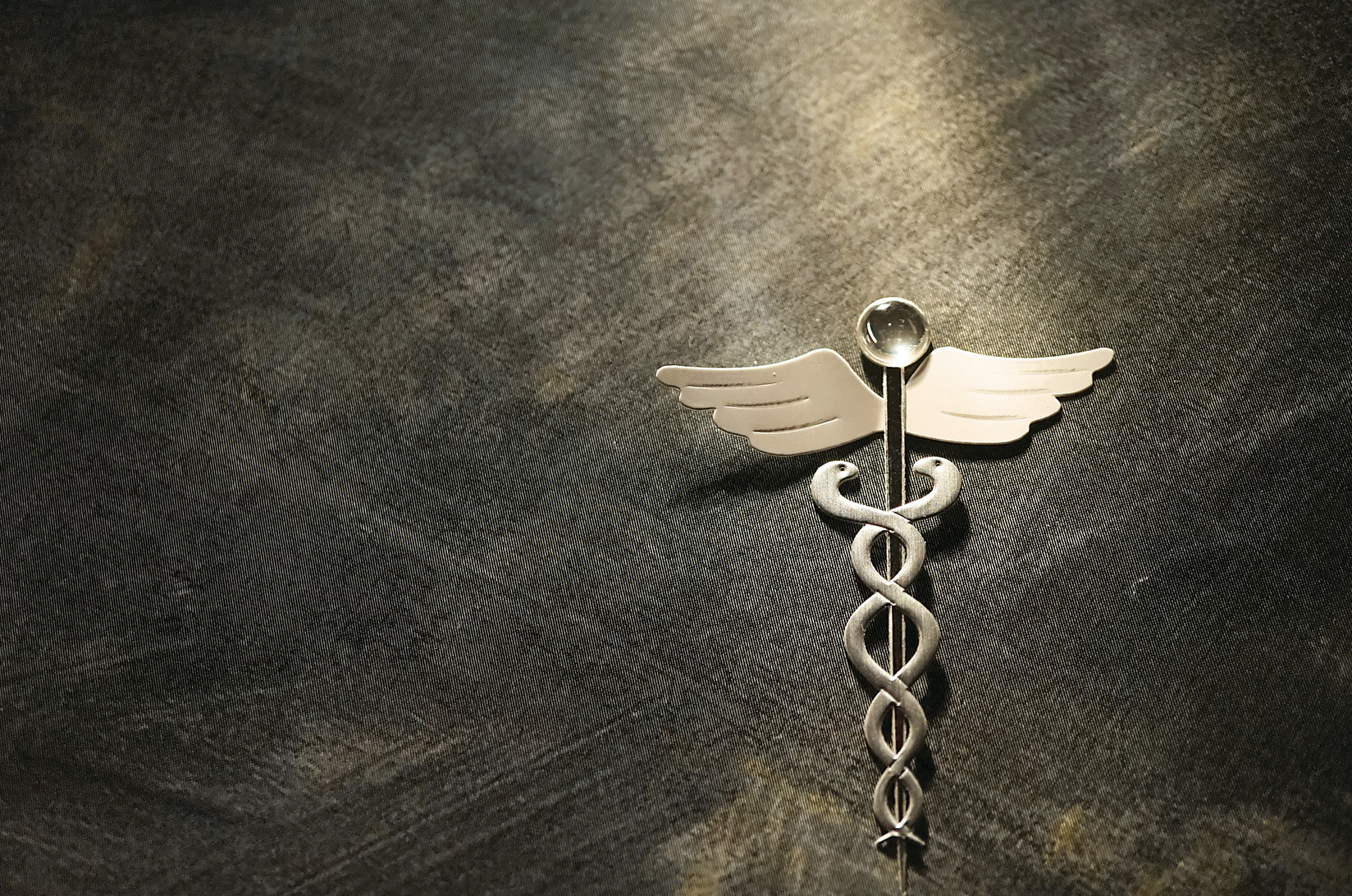 The caduceus is originally defined at the banner or staff carried by a herald, and was a symbol of the god Hermes. This god of communications was the patron of messengers, announcers and orators. In war, the caduceus was often carried as a banner of peace and conferred immunity from harm upon the one who carried it. The caduceus originally had little or nothing to do with medicine.

Like all symbols, the caduceus is rich with meaning and layered with interpretation. Symbols often have a life of their own, and like all living things they grow and evolve over time. Studying symbols can uncover their history and origins, better illuminating their present meaning, but meditation upon them may reveal secrets lying dormant within them, like germinal seeds waiting to birth the next generation.

The appropriation of the caduceus as a medical symbol dates back intermittently as far as the 16th century, and it was formalized as the symbol for the Medical Depart­ment of the US Army in 1902, after which it became much more commonly used in a medical context. Whether this was by mistake or design, this appropriation at the deepest level may not be one of confusion, but instead one of clarification, and perhaps a premonition. The staff of Asclepius may symbolize Western medicine’s past; with its singular serpent, it strongly portrays Western medicine’s unbalanced approach to health.

It is the caduceus, however, when fully understood and illuminated, that tells us where medicine is heading. With its symmetrical serpents, it heralds an emerging paradigm of balance, one which unifies both East and West, spirit and matter, intuition and logic, allowing an organic philosophy to infuse our overly mechanical one.

In upcoming issues we will journey through human energy and endocrine anatomy using this symbol, the caduceus, interwoven with the chakras as a map. The chakras are a metaphysical system that diagrams the interrelationships among the various aspects of our multidimensional selves. The word chakra means a spinning disk, and in humans these energy centers compose our subtle anatomy.

The chakras act as transformers between the opposing forces of manifestation and liberation. They modulate the frequency of these energy currents, making the downward manifesting currents slower and denser and the upward liberating currents more rarified and faster. A blockage in any of our chakras may result in an inability to either expand our consciousness or manifest our desires.

Each chakra has a specific nerve network, or ganglion, associated with it. These ganglia can be seen as antennae which receive and transmit information relevant to the areas governed by each specific chakra.

Each one of these seven major centers of the body has multiple associations, from the purely physical to various emotional realms and states of conscious awareness. Each chakra is also associated with a specific color, sound, element and food.

Anodea Judith has written excellent books on the chakra system, and I will use her work as a template upon which to build, adding more specific and practical medical information, especially as it applies to the endocrine or hormonal system from the adrenals up to the hypothalamus. I encourage all those interested in a more in-depth study to purchase her books, Wheels of Life and The Sevenfold Journey.

Also, in comparing two diverse systems, there is no precise one-to-one correlation. For instance, it is impossible to superimpose the concept of the liver and kidney energetic networks of Chinese medicine upon the organs of the same names in Western medicine. These two systems speak very different languages, and any attempt at absolute translation will lead to miscommunication.

The same holds true when comparing glandular anatomy and the chakric system. Although many have assigned one gland to one chakra, this doesn’t always quite fit, and leads to variations among the interpretations.

Although these systems do overlap, trying to stretch one to fit the shape of the other harms them both. It is often the difference between thinking anatomically as opposed to energetically. Both are right. What is given in the articles to follow is a guideline, not a gospel, about some of these associations.

This article was originally published on December 31, 2019.