CATALYST at Sundance 2020: Acasă, My Home

Journalist Radu Ciorniciuc set out to make his first film documentary. Four years later, he was leading an entire social project. In this year’s World Documentary Special Jury award winning film, we are introduced to the family of outcasts who changed his mission completely.

Like most Eastern Bloc capital cities, the Romanian capital, Bucharest, maintains various architectural afterthoughts of its communist era. Most well-known to foreigners may be the city’s visually iconic parliament building. Constructed under the order of Communist dictator Nicolae Ceaușescu in the early 1980s, the Palatul Parlamentului is the largest parliament building in the world.

Under his “systemization” program, an urban planning exposition inspired by the then-North Korean leader, Ceaușescu demolished and reconstructed hundreds of Romanian city buildings, monuments and even whole villages during his 24-year dictatorship. The Palace being one of the grander of Ceaușescu’s urban development schemes, several other Communist-era sites in both Bucharest and across Romania remained unfinished after the revolution came in 1989 and Ceaușesc was executed. Now barren ruins, these areas are tragic reminders of the forced relocation that displaced tens of thousands of rural Romanians, the destruction of cultural and historical places and the brutal forced construction suspected to have killed thousands.

One post-Communist abandoned area, though, experienced complete reclaim—not by the new government or any industry, but by nature. On the outskirts of Bucharest, the Communist leader had set out to transform a large swampy area into a neighborhood with plans of large-scale architectural projects including a massive manmade lake. After his execution, this area, known as Văcărești, was deserted and for the next 27 years abandoned by the post-Communist government. High concrete dykes—the only actually completed construction—acted as walls to separate the area from the city. For decades, hardly anyone ventured beyond these walls. Slowly, nature and wetlands assumed control.

With the absence of urban development, a diverse natural ecosystem blossomed in Văcărești. Just meters away from the bustling city outskirts, hundreds of species of plants and wildlife miraculously made a home.

Early in 2016, Romanian investigative journalist and multimedia reporter Radu Ciorniciuc began exploring this unsuspecting green oasis. The once unsung region was suddenly gaining nationwide attention: A successful four-year-long fight by public interest groups was set to finally grant the delta an official protected area title. The Văcărești delta would become one of Europe’s largest urban nature preserves and Radu Ciorniciuc was to be there to document the transition.

Before long, though, Radu’s priorities would unexpectedly shift. Along with the delta’s other local inhabitants, it was relatively well-known that a large Roma family lived among the lush ecosystem. The Enache family, made up of nine kids and their parents, lived in a homely, self-constructed hut sheltered within the tall reeds and grasses of the wild wetland. 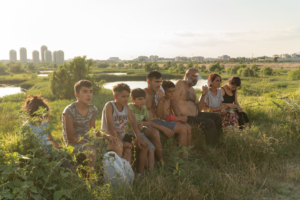 “First, I just saw the kids. They were quite funny looking to me then— it was summertime and their hair was burnt and dirty, their skin was sunburned. I approached them and they led me to their father,” Radu explained to me as I sat down to discuss the film with him in Park City last week.

Radu learned that the father, Gica Enache, was sort of a local figure for biologists, journalists and others who came to study the area due to his immense knowledge of the landscape. He also quickly learned that his family was under threat of being forced out of the now protected area. Radu grew interested in this family of misfits, observing the nine children running wild and carefree, the first scenes of his documentary showing them scavenging for food, swimming together in the soft afternoon light, catching and releasing aquatic birds. He came to know the parents and their anti-establishment attitudes; their persistence on surviving despite constant conflict with social services. It was this story, he decided, that needed to be followed.

Radu shadowed the Enache family for four years from their life of freedom living as part of the natural ecosystem, to their transition to urban life after the opening of the Văcărești Nature Park forced them into the city.

The film is always stunning if not difficult to watch for what it forces us to recognize. We are confronted with the uncomfortable realization that beyond the undeniable advantages of being born with privileges economic, racial and educational, even more basically, it is an incredible advantage when our ingrained ways of life are already in compliance with the culturally acceptable.

Reflective, investigative and with a seemingly natural ease, Radu’s work creates space for the audience to empathize with each character as they face the challenges of what it means to adapt to their new way of life.

“The film is built around one family’s drama and, keeping the proportions, around one of modern man’s biggest dilemmas: to go back to nature, where life is free but harsh without the benefits of civilization? Or to be part of society that offers opportunities of a comfortable life, but only to those who are willing to embrace the pressures that come with comfort?” the director writes.

In the end we are surely left debating within ourselves what the family gained versus what they had lost.

While the film remains a documentary, Radu and his team knew practically from the beginning that they would be taking a different approach than most documentarians.

“Early on, one of the kids, 11-year-old Rică, came to me and said ‘Look man, when I grow old I’m probably going to leave my family and explore but I’m so afraid that I won’t know how to get back home because I don’t know how to read signs.’ It was one of the moments I said to Lina (the film’s screenwriter), okay, here is something that we can actually give the family that they can use for their whole lives.”

With literacy as a first step, the Acasă Social Project would take full flight. The team began mapping out all sorts of issues the family was facing, including healthcare, education, housing and bureaucracy navigation, and became a mediation platform matching them with services in Bucharest. “Because we are white people with access to media channels and are quite known in Bucharest, it was easier for us to knock on those doors,” Radu said.

At one point, the team became desperate for funding. Radu gathered up about 1,000 photos that the young Enache kids had taken over the past year with film cameras the cinematographers had given them. Working with a local publicist, he put together a multimedia photography book and interactive augmented reality app displaying the young Enaches’ work. After a successful launch at the Romanian National Museum for Contemporary Art, the book was distributed nationwide, and the social project was saved.

“I’ve been doing a lot of work journalistically on marginalized people and human rights. The reason I shifted to investigation was the need to have a greater impact on the topics I’m researching and the people I’m working with. I think this is one of the best things that happened to me during this project. By stepping out of my journalist box I gained more freedom to act on what I would see in the unseen of a particular story.

I don’t believe in objectivity anymore. It’s impossible and it’s hypocritical to even think that you are not taking sides. Nobody has a gun to your head to make you write about shale gas or discrimination… You do it because you have some values that you think are important and some causes that you think need to be made public.” 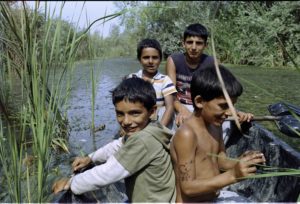 Radu further discussed how Romania is experiencing a political/social phenomenon similar to the US wherein people are becoming accustomed to racist, oppressive remarks and sentiments expressed openly in media and from politicians.

“One of my dreams for this film is to show it in a room full of right-wing people. There’s a racial divide in Romania. Gypsies were enslaved just until 150 years ago. Nazis would exterminate them as well. The effects of this lingers—there’s still a hate towards the community which I could never explain. I think this film has the power to maybe make people think differently, beyond skin color or social background. And by doing this, I think people will learn more about themselves. They will become less scared of others that may seem different, learning that in reality they actually aren’t.”

Radu hopes that by attending Sundance he will gain the international attention to propel his film forward to a place where he can screen it successfully back in Romania.

“The plan is to bring as many people and go to as many towns and villages as possible because, really, this film is made for the people back home. We even have this idea to bring the film to supermarket parking lots. Though it touches on universal themes, it’s a film made first of all for Romania.”

On Friday, the Sundance 2020 Awards were announced and Acasă was among the winners. Radu and his team are heading back to Romania with the festival’s World Cinema Documentary Special Jury Award for Cinematography, an impressive achievement for the first-time filmmaker and a success that will surely propel the film onwards. As for the family and the state of the social project, Acasă’s success has recently bought the family their own home and piece of land, the true and proudest achievement of Radu’s work. Here, they have a place that cannot be taken from them. Where animals may roam about around them. A small piece of freedom, returned.

This article was originally published on February 5, 2020.