The week after the presidential election, my mother went to the hospital with a terrible headache. She had a hemorrhage on the left side of her brain. As they were checking her in, she said that if she died it was because of Trump and she wanted it noted in her medical record.

The days after the election were the worst she remembers experiencing since she was a child during the Spanish Civil War — a horrible war that ended with the installment of an authoritarian dictatorship under Franco. Her father, an admiral in the Spanish Navy who had not yet declared a side in the first weeks of war, was assassinated by an angry mob early on, along with many others. She was seven years old. Days later she, her mother and sisters escaped the island of Menorca in the middle of the night, witnessing murders as they fled. 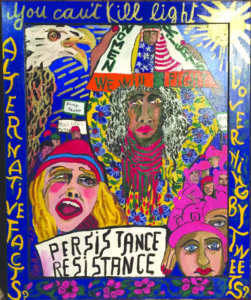 For the rest of her life in Spain before coming to the U.S. and 20 years after, Franco ruled the country. He effectively suppressed all cultural, language and political diversity, dismantled the separation of Church and State, “professed a strong devotion to militarism, hyper-masculinity and the traditional role of women in society” (Wikipedia) and kept Spain from experiencing most of the social and financial progress that post-WWII Europe experienced. He punished and murdered countless dissidents and their families along the way, utilizing “the Law of Social Responsibility.”

It is clear to me that what my mother went through that week was not simply an exaggerated response to Trump, but an actual reliving of her childhood and girlhood traumas.

This is time for us to be very, very thoughtful, very canny, determined and relentless, but to keep in mind that we do not want chaos, we do not want to destroy each other to achieve our ends.

The battle in which we are currently engaged in this country is, at least partially, a psychological one —a battle that is about two very different ways of reacting to stress, fear and disagreement.

By employing thoughtfulness, truth, compassion, steadfastness and vigilance, we move closer to those very  ideals. It is the long game. It will require patience and stamina and it may feel frustrating, endless and impossible at times. But it’s better than taking up guns, stones or words of hatred. It’s better than revolution and civil war. Let’s use all of our thinking, rational, future-minded minds to keep that from happening.

Mom’s stroke was a big one and we were all scared, though she started to recover quickly. She’s 90 years old but the neurologists said she has the brain of a 60 year old. Still, she lost peripheral vision and some kind of perception on her left side— as if the left side doesn’t really exist. But she is so determined and so vital and healthy that she immediately started compensating. Now it’s impossible for almost anyone to tell there is a problem.

However, for some weeks after her return home, she did not feel like painting. I had never seen her not want to paint.

Then she began. It was very hard for her. It took her two days to do what would have taken her two hours before, but she persisted.

Now she has finished another painting (see previous page). It is wild and the colors are very different for her. I can tell that her way of seeing has been affected, but she has found a work-around, her way around the new obstacle. Her creativity and her pure joy comes through. The light is still very much alive in my mother’s eyes.

Monica Pasqual is a musician and songwriter living in Oakland, Calif.

This article was originally published on April 1, 2017.