Since its inception in March, the Neighborhood Resili­ency Initiative (NRI) has installed over 20 community gardens in the Salt Lake Valley, from Rose Park to Draper. The project’s purpose is to increase the supply of locally grown fresh food by connecting neighbors willing to share labor, land, tools and expertise.

Volunteer Masha Shukovich says she never considered herself much of a gardener, but has always wanted to learn. When she first heard about the NRI she volunteered her skills as a writer and storyteller for the group’s website and outreach. She is now learning how to garden from mentors she connected with through NRI.

Shukovich knows firsthand the importance of growing your own food during times of economic turmoil and uncertainty. Shukovich immigrated to the United States in 2004 from the former Yugoslavia where, as a child, she lived through a civil war. Her family lived in post-Soviet style housing, along with many other families who were struggling to get by. They all shared a small communal patch of land where her father planted a garden. 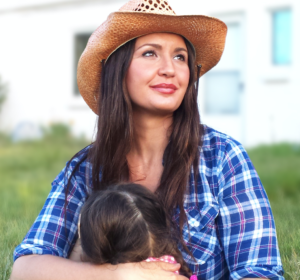 “We had a cherry tree and an apricot tree and they were just the sweetest, most delicious cherries and apricots that I’ve ever had,” said Shukovich. “It was such a gift in that space, that gray and depressing place, to have these trees.”

When the COVID-19 pandemic hit Utah it reminded her of growing up in a war-torn country and the fear that often affects communities during these times of unrest.

“It was a comfort to have that little patch, which created some sense of normalcy in all of that chaos. It was a different kind of chaos than living right now. But there’s so many parallels to be drawn,” she said.

The pandemic arrived at the beginning of Utah’s growing season. Would-be gardeners were looking for help in starting new gardens and had questions about composting, when to plant and locating resources.

Founding members Barbarella Roller and Michael Cundick believed that the centralized food supply chain would be disrupted by the shutdown. They understood the importance of having fresh, healthy, local food available especially during times of crisis. Thus began the Neighborhood Resilience Initiative.

Cundick and Roller are experienced gardeners who were ready to hit the ground running forming the NRI. (Read about Roller in the May 2020 CATALYST: The Neighborhood Resiliency Initiative, p. 36.) Cundick has been passionate about urban farming and gardening for close to a decade, and has participated in multiple communal gardening and permaculture efforts. 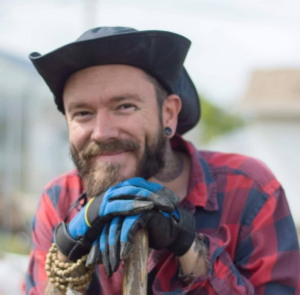 About 10 years ago he started Artists for Local Agriculture, a nonprofit organization uniting the artistic community in support of sustain­able urban farming. He received his Permaculture Design certificate in 2015 and apprenticed for six months at Heartwater Farm, an off-grid permaculture demonstration site in Southern Utah. He is the chair of the Utah Permaculture Collective and co-director of agriculture for the Krishna Food Forest and Farm. He also helped co-found SLC Air Protectors, a local organization championing clean air in Utah. And he is now in the running for Salt Lake County Mayor on the Green Party ticket.

Back to the future

“When times get hard, people tend to connect back with nature and with wanting to provide for themselves, to feel that sense of control and sovereignty and resiliency,” he says, reflecting on the  Victory Gardens movement of previous eras (see https://catalystmagazine.net/bring-back-the-victory-garden/ from CATALYST, April 2020 and “Victory Gardens in World War 11” in this issue, page 24.)

Cundick believes that, in an urban setting like Salt Lake City, community gardens could potentially provide people with up to 40% of their daily calorie intake from vegetables locally grown, “which would have the added benefit of giving people meaningful, healthy activities and also augment food supplies with really fresh, nutritious foods. We don’t want to just be living off canned beans when we could have roasted beets and arugula and fresh-picked salads in the mix,” he said.

Early spring crops planted in these gardens (peas, spinach, lettuce and radishes) have taken root and are already producing.

Cundick likes to incorporate more diversity into his gardens than most traditional gardeners. Wood boxes and container gardens are the norm, but in one instance Cundick worked with a land donor in Millcreek to build a Hugelkultur mound, where a trench is dug and logs are buried under a mound of compost to create a raised garden bed with decaying wood providing a rich soil from beneath.

Cundick describes the NRI as a “neighbor helping neighbor” initiative where an organizers have access to a database of people living nearby who want to contribute to gardens as mentors, volunteers, land donors and resource donors.

“The NRI is really a tool to help neighbors connect with each other more easily and have the support they need to succeed in their communal gardening projects. Since this is resident-directed, every project will differ and is up to the relationships that are developed in the course of the project,” he said.

If a land donor doesn’t have the resources for a communal gardening project, then resource donors can be contacted to provide the tools, plants, compost and other necessities. Several community members have volunteered to cover the cost and provide resources. Wasatch Community Gardens recently donated hundreds of tomato plants to their cause.

Once the garden produces, land donors are encouraged to share their produce with volunteers and those who are in need in their community.

“One silver lining of this pandemic is that we have reason to meet our neighbors again and recognize how important it is to have local security networks,” said Cundick.

Neighborhood Resiliency Initiative gardening mentor and steering member Mark Hammond wanted to find a way to bring his community in Draper closer together. This year, in light of the pandemic, he built five 4×4 garden beds in his backyard with his wife and daughter.

Hammond is a neighborhood block captain for emergency preparedness and posted photos of his garden to a neighborhood Facebook group he started. Since learning and talking about the NRI with his neighbors, he said that more people in his area have been interested in gardening.

He passed out “Hello Neighbor” flyers around his Draper neighborhood inspired by Salt Lake City Mayor Mendenhall’s community network assistance campaign. The flyer, also found on NRI’s website, introduced Hammond and the initiative and invited his neighbors to get involved.

“I thought it would be a good way to get people to know each other better because when it really comes down to disaster situations like pandemics, knowing who your neighbors are is the most important thing,” he said. “The people right around you are the ones you need to know; you need to have their trust to be able to work together to solve problems.”

Julie Hirschi is a freelance journalist and storyteller. When she’s not busy writing, she’s outdoors with her three boys or drinking coffee.

Get involved in the Neighborhood Resiliency Initiative

To find or organize a community garden in your area, visit www.neighborhoodresiliency.com where you can sign up as a volunteer, land or resource donor, mentor or organizer.

They are currently following and practicing the state’s recommended physical distancing and sanitation precautions related to the pandemic by limiting their numbers and wearing masks in all gardening projects.

This article was originally published on June 2, 2020.