Contamination is a problem, but the city has a solution: Division of Sustainability intern Mitch Davis 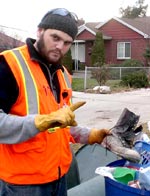 The recycling program in Salt Lake City is plagued by the problem of contamination. It is not unusual for non-recyclable items such as glass, dryer lint and yard waste to get tossed in with perfectly good recycling. Even worse are the baby diapers, animal waste and food scraps.

The recycling program in Salt Lake City is plagued by the problem of contamination. It is not unusual for non-recyclable items such as glass, dryer lint and yard waste to get tossed in with perfectly good recycling. Even worse are the baby diapers, animal waste and food scraps. Mixed in with paper and plastic, these items can contaminate a whole bin or even an entire truckload, requiring it to be dumped into a landfill.

To combat the problem of contamination, Salt Lake City is embarking on a new campaign of education and outreach. Without fining offenders, but by literally going from house to house and bin to bin, the city hopes to educate enough residents to significantly improve recycling. At the front of this movement stands one man, a recycling detective and city ambassador, Mitch Davis.

On pickup day, people keeping a close eye on their blue recycling bins might see him. Tall, bearded and personable, Mitch is especially unmistakeable in his official orange vest. He is also quite possibly the only person to look happy digging through a pile of recently discarded items. His concern with waste, after all, is not only part of his job-it is a passion that first began when he was 12 years old.

“When I was 12, I was working on my environmental merit badge for the Boy Scouts. Part of the project was to take on a challenge; I chose to concentrate on recycling.” Later on that year, young Mitch read an announcement in the local newspaper. The city of Layton, where he lived, was looking to create a new committee to explore the possibilities of starting a recycling program for the town. “My mom encouraged me to participate in it and I sat on that committee for almost three years as the youth representative.” Nearly a decade later, Mitch Davis is an undergraduate student of environmental studies at the University of Utah and a very important intern for Salt Lake City’s Division of Sustainability.

Extent of the problem

One autumn day, I met with Mitch at City Hall to join him on one of his routes around the city. Exiting the building, Mitch decided to glance inside a recycling bin standing near the door. As if a premonition of what we were to find, there on top of the newspaper and plastic bottles sat a bag holding half eaten take-out food.

Based on earlier conversations with Mitch I was surprised to find a case of bad recycling in the heart of the city, at its very governing center. “Different areas of the city show greater contamination problems,” Mitch had told me. “Salt Lake is a unique place [in Utah] in that we have a lot of ethnic diversity. Oftentimes recycling problems are a result of a language barrier or cultural difference.”

Lazy or ill-informed practices, however, are not contained to specific places and people. As Debbie Lyons, recycling program manager for the Division of Sustainability, explains, “Some people also don’t understand the impact when they put in just one bag of trash. That bag could break and if it has food in it anything the food touches can no longer be recycled. In some areas of the city, as much as 30% of the total weight collected is contamination.”

When we arrived on our chosen street for the day, Mitch prepared for work. He put on his official uniform, a day-glow orange vest of the type worn by crosswalk guards and a city badge complete with mug shot. He grabbed an all-weather surveyor’s clipboard filled with yellow violation slips, informational sheets listing recyclable and unrecyclable items and magnets with the same information. He pulled out a stapler, his self-proclaimed one and only weapon, with which he attaches the information and violation notices to the blue recycling bins. Finally, he put on his gloves. “It only took one time of not wearing leather gloves to make sure that those gloves were always on,” he told me. “I licked my finger one day after work turning the page of a book and that was it. Now I won’t even lift the bin lid without them on.”

After working half way down the block with fairly little incident, we came to a trouble can. Before starting, Mitch had told me, “If you can smell a blue bin, then you know something is wrong. Nothing that is recyclable should have an odor. So if it does, you are likely to find packaging covered in food particles or something else.” This particular can gave off a distinct odor of coffee grounds. Delicately, Mitch reached in to begin his investigative digging. Before he could find the food, he discovered other problems: metal dog food and water bowls, a red plastic hand basket from Harmon’s.

Mitch began to explain that the basket, although plastic, would only be thrown out by the sorters at the recycling plant, when a young man, slightly embarrassed, stepped out onto the front porch of the house.

“Hello,” Mitch said to him, in a disarmingly friendly yet firm voice. “I’m out here from the city,” Mitch explained. “I am checking up on the recycling bins in your neighborhood to make sure that people are following correct recycling practices and I noticed a few problems with your bin.” The young man seemed interested and surprised. He quickly accepted Mitch’s offer to go through the bin together and to learn about the offending items.

Holding up the dog bowl set with the letters G-U-S written across the front Mitch said, “I hope that you didn’t loose Gus.”

“Nope,” responded the man, “I don’t even know why we threw that out.”

Mitch explained that even though the recycling center can take certain kinds of scrap metal, they prefer those items to be left out of the recycling. It was a similar story with the grocery basket. “If plastic doesn’t have a recycling symbol and a number,” he urged, “don’t try to recycle it.” After talking for a minute, Mitch handed the man a list of recyclables and non-recyclables. “If you have any questions,” he said pointing to the bottom of the sheet, “just call that number.” The young man thanked Mitch and we moved on our way.

Mitch Davis and Debbie Lyons hope that positive encounters such as these will lead to visible reforms in how Salt Lake residents recycle. It all starts with gentle reminders and face-to-face meetings. Letting people know that the city actually cares and that their recycling, if properly maintained, really does get recycled. With the help of residents who are willing to learn and change old habits, recycling in Salt Lake can certainly be a success.

Katherine Pioli is CATALYST Magazine’s staff writer when she isn’t off fighting fires in national forests.