Two weeks is a long time in the life of a young duck or goose—and a long time for new young duck/goose owners. Watching them over the course of these weeks reminds me of what Midwesterners say about corn growing during the hot, wet months of summer: If you watch and listen closely you can see and hear them grow.

In no time at all they have quadrupled in size and not lost a bit of their spunk. Here are some of the things that they have taught us in their toddler phase of life: 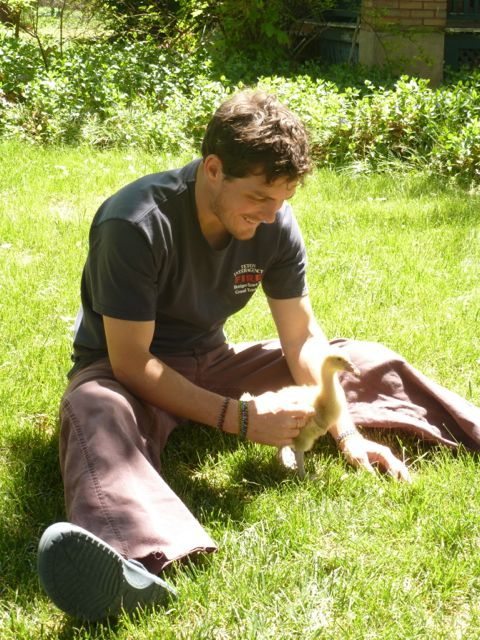 Keeping Clean – I honestly feel like I have had children and inherited the task of changing diapers. These peepers are messy! They eat and drink constantly, consequently the other end is busy, too. Their brooder needs to be cleaned once a day, every other day at the minimum. It keeps down on smell, but also protects the birds from disease. If the wet, poopy bedding material is left it will start to mold quickly and make the little ones sick. Take them out while you sweep up the shavings. Cleaning the brooder out with some water and chlorine bleach is recommended. I have not done this. I just let the box dry out before replacing the shavings. But, maybe I should use some bleach.

Eating – A very helpful book I am reading, Barnyard in your Backyard, gives a list of health conditions, contagious and non-contagious to watch out for. One is called hardware disease. It results from a duck or goose ingesting something inedible that harms it from the inside, usually a piece of glass, metal, etc. Ducks and geese never, not even as adults, learn what is food and what is not food. We see this all the time. They chew on the chicken wire and on the curtains. Now that they are tall enough, they chew on the heat lamp and the tablecloth hanging near the brooder. While we were out one night the heat lamp mysteriously shattered. We were afraid they had eating some glass before we saw and cleaned it up, but they never showed any problems. They also eat their bedding, more on that later. The babies should be given constant access to food. Their appetite is enormous. We probably refill their feeder three times a day. Give them some grit, or sand. They need it for digestion. They also love handpicked greens, a good thing to introduce them to slowly in their second week. We feed them dandelion leaves, a favorite, and grass. The end of the second week and into the third is when you must transition them to a lower protein mash (16%) to prevent the Angle Wing deformity (see our post from March 18 for more information).

Drinking – It is impossible to keep them from splashing water everywhere. It is one of the reasons why we have to change the bedding every day. Oh well. Last week they got too big for their old water feeder so I switched to using a heavy, sturdy metal bowl, about 2.5 inches deep. To keep them from climbing into the bowl (and pooping in it which can also make them sick) the books recommended putting in a floating piece of wood or some barrier that allowed them to only access a small boarder of water instead of the whole dish. I filled a jar with water, turned it upside down in the bowl to take up space in the center, and then filled the rest with water. It leaves them about an inch all around the rim to drink from. They still will step a foot in once in a while, but it’s not terrible. They go through the water fast, every few hours.

Bedding – Nearly every source recommends using wood shavings for bedding (not from cedar because the oils irritate their skin) but also warns that the peepers will want to eat the shavings. This can make them constipated, which can kill them. We put down an old bed sheet over the shavings (recommended as a good non-slick cover for shavings, don’t use newspaper, too slippery). They still pulled the sheet back in places and ate shavings, but less that they would have without it. It gave us another thing to wash everyday, unfortunately. But it was simple cleaning. I sprayed the sheet off with the garden hose and let it hang dry. Now, after two weeks, we have stopped using the sheet. They are not as interested in the shavings.

Heat – This week, the end of their second week of life, we have begun weaning them from heat. During hotter days we turn the heat lamp off. At night we still keep it on. We have even started taking them outside in a new bottomless brooder. It sits on the grass allowing them to eat. It gets them used to being outside and in the wind where it isn’t always warm and constant. At first they didn’t like the big world and pilled in a big fuzz mound to keep warm. Now they enjoy being out there. Reducing their dependence on a heat source will help them grow in their adult feathers faster, so the books say. We are starting to see some new little feathers, but they are still hidden under their baby down. 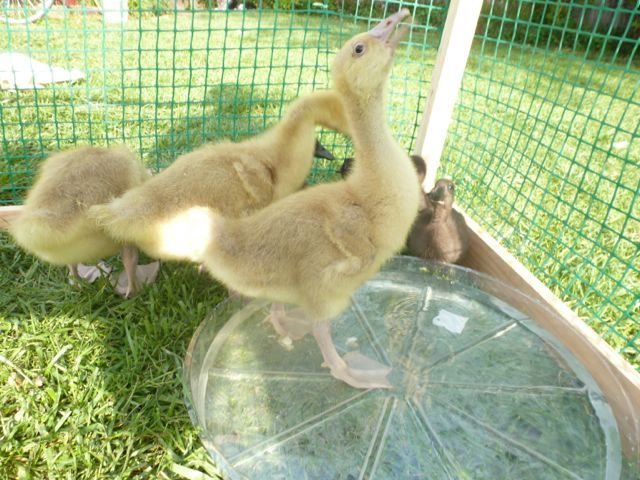 Pool Time – We bought them their first pool. It is a thin plastic water basin for a plant pot. It measures 17 inches in diameter and only an inch and a half deep. We put it outside with them in the outdoor brooder. Their feathers show a little bit of water resistance, but still not much. They bathe themselves and play around, which is important, but they also should not be allowed in for too long to avoid them getting wet, cold and sick. The ducks love the water so much they absolutely lose their minds. They don’t realize that it is too shallow to actually swim, so they lie down and paddle their feet and scoot across the pool and continue out across the grass. Then they shake off and run back for more. It’s endlessly entertaining. 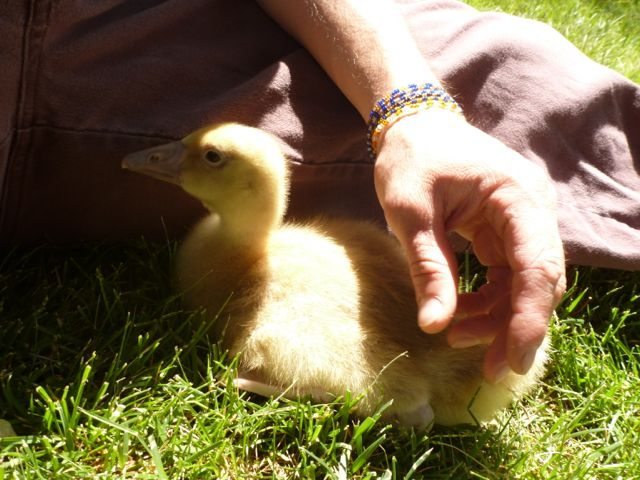 Personality – We were starting to notice that the geese relaxed in our hands faster than the ducks who always flopped around sounding distress peeps. Turns out that geese are known to be far more sociable than ducks, who prefer to do their own thing. I guess that will never change. The ducks are still so much fun, though. They are absolutely beautiful and it kills me every time they shake their tail feathers and stretch their wings out. We have learned to approach both the ducks and geese quietly and slowly. They are easily frightened by quick movements and strange, loud sounds. Keep the situation calm and unthreatening and they will react better to being picked up and held.

This article was originally published on May 4, 2012.