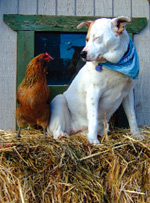 From the outside, Holly and Chap Caughron’s red brick house in the 9th & 9th neighborhood looks like a standard family dwelling. But behind the tall wooden fence lies a small slice of paradise, especially for anyone interested in local food. It is what many call an urban farm. Here, in the summer and autumn months, Holly Caughron and Chap produce nearly half of their own food.

From the outside, Holly and Chap Caughron’s red brick house in the 9th & 9th neighborhood looks like a standard family dwelling. But behind the tall wooden fence lies a small slice of paradise, especially for anyone interested in local food. It is what many call an urban farm. Here, in the summer and autumn months, Holly Caughron and Chap produce nearly half of their own food.

Nearly every inch, save for a round patch of grass in the middle, is covered in sustenance. The list of fruit trees includes cherry, apple, two plums and a pear. By summer a healthy grapevine consumes the arbor built over the back patio. There’s the strawberry patch, herb rock garden and raspberry patch. Behind that, along the south, three raised beds grow something of just about everything in the summertime.

It looks like hours of work and decades of dedicated planting, weeding and harvesting. But Holly and Chap have only been in their house since 2007 and, they say, it is surprisingly not as much work as one might imagine. Both have full-time professional careers-Chap is an M.D.; Holly owns her own green marketing business, Green Rising Marketing. On top of that, until two years ago neither had ever grown a garden, let alone tended to a miniature farm complete with vegetables, chickens, bees and goats.

“We were raised in the suburbs of Houston, Texas,” says Holly, recounting her incredible journey from disconnected suburbanite to environmentally focused city dweller. “It was much like living in Sandy today and although we had a yard we grew almost nothing.”

But her family did keep a small piece of land with a barn a few miles away and each year Holly raised a flock of chickens and some rabbits for a 4H project. Chap, on the other hand, had never attempted to grow anything before in his life.

Even with their collective lack of experience, when Holly and Chap decided that they wanted to raise their own food they jumped into the project with both feet. They started all of their plants from seed, setting up a table in a sunny southwest corner of their house. Within two years they had planted all of the trees and had started keeping chickens, bees and goats. Having somewhat realistic expectations, they tried to enjoy the experience without setting any goals. “We honestly had no idea whether or not we would be successful,” remembers Holly. But the two were pleasantly surprised. “Chap just happened to have a green thumb. I don’t, as much. We were just happy that anything grew.”

On a private tour of the “farm,” Holly, dressed more like a marketing specialist than a farmer, takes me to meet the chickens. Stepping into the muddy goat pen where the chickens cluster, Holly doesn’t even flinch or think twice about her soft leather boots. 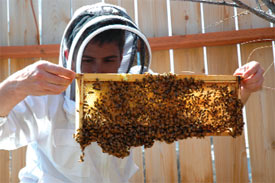 Opal, Roxy, Goldie One and Two and the other three chickens continue pecking as Holly enters the pen, unconcerned by her presence. The chickens are yellow-gold, black, white and red, of various breeds. “We have Rhode Island reds and the black one is a frizzle,” say Holly pointing to the birds around her feet. “That one is a great blue something-or-other.”

Keeping chickens, Holly assures as she checks their coop for fresh eggs, is simple. There are rules to follow; city law requires a specific distance between the coop and human dwellings, and regular coop cleaning; but as a whole, they are low maintenance. Salt Lake County dwellers, on the other hand, must deal with a health department that thinks chickens are dangerous. So unless they want to join the thousands of other happy county egg-gathering law-breakers, no chicks for them.

Initially they let their chickens at large day and night but got tired of chicken poop everywhere, so now they relegate them to their pen most of the time. Holly says they’ve had no sign of predators. [Editor’s note: Holly and Chap have been very lucky. We know several people in the downtown area whose initially less-than-secure chicken housing resulted in some loss to raccoons.]

Goats, on the other hand, turned out to be a chore. “They are pretty easy to feed and water, but milking them twice a day, every day, gets to be a big pain,” she admits. And yes, it is perfectly legal to have two female goats (does) in Salt Lake City.

Moving on, Holly introduces me to the bees-two tall stacks of wooden boxes stationed underneath what appears to be a tamarisk bush. They are Italian bees, she tells me. My brain instantly conjures up a mental image of bees relaxing in the sun, drinking red wine, and it turns out that might not be too far from the truth. “They are not aggressive at all,” says Holly, who claims to spend hours of her free time sitting right in front of the hive watching the worker bees coming and going. “You can sit so close that you see the pollen clumped onto their back legs. I have never been stung.”

The habits of bees fascinate Holly. Bees, she says, regulate the temperature of their hives year round, keeping it at a constant 92-93 degrees F. In the summer they fan the entrance of the hive with their wings to send drafts of cool air circulating around inside. In the winter, they all huddle together and vibrate for warmth. If a bee dies in the hive, another will carry it outside and deposit it far from the colony-an instinctual habit that keeps potential diseases from spreading to the other bees. And the work needed to produce one pound of honey takes 300 bees visiting nearly 2 million flowers and traveling over 55,000 miles. Incredibly, Holly’s two hives last year produced 100 pounds of honey. “And that still leavs 60 pounds in each hive to get them through the winter,” she says proudly.

So how did Holly become an ex­pert on bees? “We went to the library and checked out ‘Beekeeping for Dummies,’ bought our bees from the Utah County Beekeeping Association and that was it. Both the book and the Association became excellent resources for us as new beekeepers.”

For just a little over $100 in start-up costs, beekeeping seems like an easy and rewarding hobby. “I encourage everybody to keep bees, especially because of the colony collapse,” says Holly. “There is such a shortage of bees that we need as many as we can get. On top of that, they are just such interesting and industrious creatures. I can easily see now why they are one of this state’s symbols.”

Expanding the harvest beyond their own plot, Holly mapped the streets and alleyways around her entire neighborhood to locate all of the fruit- and nut-producing trees and shrubs for gleaning. Sometimes people dismiss a fruitful tree as “messy,” and are happy for your assistance. “One neighbor has a massive walnut tree and plum and pear trees. We offered to help him pick the fruit. People with fruit and nut trees often have extra.” It’s possible to enjoy a local harvest even if you’re not a land owner.

Whether you want chickens, a vegetable garden, or just have enough time to help your neighbor pick apricots, Holly says, act now. Each thing that we do to eat locally addresses many of today’s environmental problems-and those of tomorrow. And why eat lettuce that has traveled thousands of miles when you can eat lettuce grown in your own backyard?

Holly and Chap’s urban farm has become their attempt to restore balance. The more people who make an effort to do the same, the better, Holly says. She recalls a recent conversation with former Mayor Rocky Anderson. “He said we have less than 10 years before we hit an environmental tipping point. That thought scares me, because I consider myself very plugged into the environmental movement and I still held this belief that a great crisis was still even 50 years off.”

Holly suddenly is intensely energized, but catches herself and takes a breath. “I have to stay away from that kind of rhetoric,” she says quickly. “People don’t respond to doom and gloom. The best thing we can do is provide a sense of urgency and present it as a challenge that is not insurmountable.” Holly’s challenge to her fellow Salt Lakers: Start small, glean fruit from your neighbor’s tree. Or go big, host some honey bees and harvest your home-grown vegetables. The sense of pride and accomplishment will make the food all that much sweeter.

* Shortly after this interview was conducted, Chap accepted a position in the Pacific Northwest. The couple packed up their critters and moved. Their little 9th & 9th neighborhood farmstead is for sale. You are welcome to contact the realtor at cherie.major@sothebysrealty.com; photos and info are still available at forsalebyowner.com, #21940104