What the prehistoric mounds and myths of North America have in common with Egypt’s pyramids – and together, the bigger story they tell

Graham Hancock, the Indiana Jones of journalists, will be in Southern Utah this month to discuss his new book, AMERICA BEFORE: The Key to Earth’s Lost Civilization (St. Martin’s Press) in which he explores the prehistory of the Americas and showcases evidence of a long-lost ancient civilisation which began during the Ice Age in the (misnamed) ‘New World,’ and then spread around the globe, leaving its traces in ancient monuments such as the Egyptian pyramids and Stonehenge, and in the genetic makeup of peoples living as far away as Australia. Hancock’s research takes readers on a series of journeys and encounters with the scientists responsible for the compelling discoveries that are allowing a new view of our past to emerge. In the process, from the Mississippi Valley to the Amazon rainforest, he finds that ancient ‘New World’ cultures share a legacy of advanced scientific knowledge and sophisticated spiritual beliefs with supposedly unconnected ‘Old World’ cultures. Hancock follows the clues to their source in the devastated heartland of the lost civilisation.

Here is a taste of the story presented in AMERICA BEFORE: The Key to Earth’s Lost Civilization. And yes, in the book Hancock answers the questions posed at the end of this story.

On one of our research trips across the U.S., my wife Santha and I drove the whole length of North America’s Mississippi Valley from Louisiana to Ohio, investigating and photographing ancient mounds and earthworks built by Native Americans long before the “New World” was “discovered” by Columbus.

On the fourth day of our journey, having explored Poverty Point and Emerald Mound in Louisiana, and the Winterville Mounds in Mississippi, we reached Moundville in Alabama where I found myself plunged most unexpectedly into a series of ancient Egyptian déjà vu moments as I read the literature at the site and in the museum.

It seemed that a dedicated team of archaeologists and anthropologists had “cracked the code” of Moundville’s iconography and symbolism and had arrived at a clear view of the form of religion practiced here. Just as in ancient Egypt, it was a religion that sought to penetrate the mysteries of death, and just as in ancient Egypt it was focused on the Milky Way, known as “the path of souls” and on the constellation of Orion—seen by the peoples of the Mississippi Valley as a great hand in the sky with an eye-like portal in its palm through which the souls of the deceased must pass in order to begin their journey along the Milky Way.

My curiosity was piqued. Despite turning up thousands of miles apart in supposedly entirely unconnected cultures with no contact whatsoever, there were some key symbols and complex ideas here that appeared to have been shared in both the ancient Nile Valley and the ancient Mississippi Valley.

I decided to dig deeper.

Orion, the ‘leap’ and the portal

How was travel to the Sky World achieved in the Native American afterlife journey? Anthropologist George Lankford draws on his vast store of knowledge of the ethnography surrounding this subject when he tells us that in order to attain the realm of the dead, it was believed in the Mississippi Valley that the soul of the deceased must:

…make a terrifying leap. The realm of the dead… can only be reached by walking the Path of Souls, the Milky Way, across the night sky. To get to the path, however, one must leave the earth-disk and enter the celestial realm. The portal that is appointed for the free-soul at death is to be seen on the edge of the Path of Souls. It is a constellation in the shape of a hand, and the portal is in its palm.

As I had discovered in Moundville, this Native American “Hand” constellation is none other than the constellation that we know as Orion, with the three prominent belt stars forming the wrist. Beneath these stars, identified as part of Orion’s sword by the Greeks, is a bright sky-object known as Messier 42, or the Orion Nebula. In the “hand-and-eye” motif this nebula is represented by the ‘eye’—better understood as ‘a hole in the sky, a portal,’ through which the free-soul must pass in order to reach the realm of the dead.

In ancient Egypt, the constellation of Orion, located prominently on the west bank of the Milky Way, was seen as the celestial figure of the God Osiris, Lord of the Realm of the Dead, and the funerary texts explicitly and repeatedly urge the soul to ascend to the sky and unite itself with Orion. A few examples:

You shall reach the sky as Orion.

May a stairway to the Netherworld be set up for you in the place where Orion is. I have gone upon the ladder with my foot on Orion.

The Netherworld has grasped your hand at the place where Orion is.

May Orion give me his hand.

Since the shaft emanates from the so-called King’s Chamber of the Great Pyramid, within meters of an empty granite sarcophagus, it’s therefore difficult to disagree with what is now the prevailing scholarly opinion concerning its purpose—namely that it must have been designed to serve as a portal, a “star-shaft,” through which the soul of the deceased could ascend to Orion and thence begin its navigation of the Duat.

The intention, confirmed in architecture by the star-shaft of the Great Pyramid, is unmistakable. Moreover, although ladders and stairs are among the ‘means of ascent’ suggested to the soul in the ancient Egyptian funerary texts, they are by no means the only ones. Particularly close to the Native American notion of a ‘leap’ for the portal is Utterance 478 of the Pyramid Texts (the oldest religious writings in the world), line 980 in which the deceased states:

Someone flies up. I fly up from you, O men; I am not for the earth, I am for the sky.

Such references and numerous other examples that could be cited leave little room for misinterpretation. As with the Native Americans, so, too, with the ancient Egyptians—a ‘leap’ by one means or another from the earth-plane to Orion was an essential stage in the afterlife journey, followed by the passage of the soul through a portal in the sky.

Portal of the Abyss, I have come to you; let this be opened to me.

The doors of iron which are in the starry sky are thrown open for me, and I go through them.

Open the gates which are in the Abyss.

The door of the sky at the horizon opens to you.

“The Orion Nebula,” clarifies Susan Brind Morrow in a new study of the Pyramid Texts, “is in the door of the sky.”

And in case there is any remaining doubt, the celestial address of this portal through which the deceased must pass in order to enter the Duat Netherworld is also repeated on multiple occasions in the Pyramid Texts, for example:

The Duat had grasped your hand at the place where Orion is. And, as we’ve seen:

May a stairway to the Netherworld be set up for you in the place where Orion is.

The ancient Egyptian Netherworld—the Duat—is depicted in vignettes and tomb paintings as an utterly eerie parallel universe which is at once a starry “otherworld” and a strange physical domain with narrow passageways and darkened galleries and chambers populated by fiends and terrors. There are entities whose work is ‘to hack souls in pieces.’ There are serpents of enormous size, serpents with legs and feet, serpents with multiple heads, serpents with wings. There are serpents that breathe fire and that are depicted as flooding corridors with fire. There are fire-pits where souls are roasted, in some cases head down.

There are torture blocks. There are gods armed with knives who will kill inadequately prepared souls. And one particularly curious vignette shows:

A goddess standing upright with her hands stretched out to the top of the head of a man who is kneeling before her, and is cutting open his head with a hatchet.

Looking at the scene I don’t think the goddess is trying to stop the kneeling man from bashing his own brains out. Quite the opposite—from the way her outstretched arms and hands are portrayed it seems to me she’s encouraging him to take that hatchet to his own head, or even perhaps exerting some kind of divine will or force to make him do it. What settles the matter, however, is that she is described in the surrounding hieroglyphs as “the demolishing one who cuts the damned to pieces.”

The reason for my interest in this “brain-smashing” scene is that there are repeated references to a menacing female figure usually called the “brain-smasher” or the “brain-taker” in accounts of the Native American afterlife journey.

For example, scholar of religion Paul Radin reports that among the Winnebago:

In the myth of the journey of the soul to the spirit land the ghost is not entirely a spirit until the old woman whom he meets brains him, thus, by destroying the seat of consciousness, depriving him of all corporeality and carnal desires. The ghost then becomes a spirit….

Likewise, anthropologist Ake Hultkrantz notes traditions among the Ojibway and Huron of the so-called brain-smasher [who]

… deprives travellers to the land of the dead of their brains. The loss of the brain is tantamount to the loss of the memory-soul… That is to say, the deceased definitively forgets this life and has no longing to return to it. The realm of the dead is, as the Sanopoil Indians opine, the land of forgetfulness…

There is in general something demoniac about the brain-catching guardian… In the eschatological conceptions of the Sauk and Fox Indians… the deceased perishes altogether if he is unable to save himself from the “brain-smasher.”

George Lankford gives an overview of such myths across North America and confirms the very widespread nature of the fearsome image of a “brain-smasher,” usually a woman whose task is to destroy memory (and humanity?) by removing or smashing the brain.

The Underwater Panther and the Great Sphinx

Among the many challenges and obstacles encountered on the Native American Path of Souls, a monster, the Piasa or “Underwater Panther” is of special interest. In traditional Native American accounts it is described as having strong feline characteristics but also, sometimes, a human head.

Among surviving depictions of the Underwater Panther is a pottery figure that I was able to see for myself in the museum at Moundville. Although the scale is completely different, I suggest that it bears more than a passing resemblance to the Great Sphinx of Giza. The Sphinx, of course, has a human head, not the head of a feline, but let’s keep in mind those traditions in which human-headed Piasas are described. Also possibly of relevance here is the evidence that the original prehistoric Sphinx, perhaps more than 12,000 years old, had the head, as well as the body, of a lion. After suffering severe erosion over several millennia the leonine head was recut into human form during the early Dynastic period.

Last but not least, Native American traditions of the Underwater Panther speak of a time when ‘four Piasas existed, each associated with its own cardinal direction.’ Is it a coincidence that the Great Sphinx of Giza, with its strong family resemblance to the Underwater Panther, is an equinoctial marker, oriented precisely to one of the four cardinal directions to face the sun as it rises due east on the equinox?

Are all such parallels mere coincidences?

Or is there some hidden connection between ancient Egypt and ancient North America? 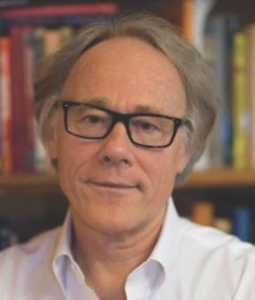 Graham Hancock is a British journalist and best-selling author of 13 books that explore controversial questions about humanity’s past. )GrahamHancock.com

This article was originally published on April 30, 2019.