All of God’s Creation in a Pair of Green Eyes

A life-changing encounter with the wolf who mysteriously trekked from Yellowstone Park to within 50 miles of Salt Lake City—Utah’s first verified wolf sighting in 70 years. 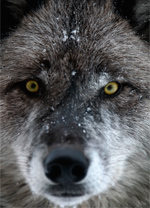 I couldn’t taste food; saliva had dried in my mouth like glue. I was mute, unable to form words. But it didn’t really matter. My brain had nothing to convey. I had even seemingly lost the ability to read. Letters no longer formed words. Sometimes I took my own pulse or lay during the day with my head pressed against the mattress trying to hear the echo of my heart beating to make certain I was still alive. Eventually I could no longer live on my own and came to Utah to be with family.

One day, in the midst of an urgent sensation that I was going crazy, someone who knew I’d been a biologist working in wildlife management for many years invited me along to visit a ranch near Morgan, Utah where an animal caught in a coyote trap lay in a cage awaiting identification.

The authorities had told us the animal was very big, too big to be a dog—possibly a coyote, but too broad and bulky and muscular. Perhaps it was a canid hybrid of some kind; could it be an abandoned wolf-dog pet… or was it actually a wolf? But we don’t have wolves in Utah.

As it turned out, it was a wolf. The man from the state’s Wildlife Division said so immediately upon seeing him. When it was my turn to move close to the bars to stand in front of him, I gasped. I knew him; I would have known him anywhere. He had come to meet me from my dreams, from the place deep inside my soul that still believed in heaven; he was waiting for me across the span of countless miles and many years. I looked up above me at the sky and down below at my feet. At just this point where longitude and latitude collide, our paths had crossed.

He was unsedated. I could feel a sense of calm radiating from him. He didn’t blink, nor did he swallow. I knelt without knowing it, to be level with his eyes and grizzled, grey face. He was still, like a statue guarding a gravesite. And huge. The pads of his feet were dirty and worn like frayed fabric. I knew in his chest beat the heart of a dog.

For a long time I had been a keeper of animals at an urban zoo. Daily I beheld sinuous tigers swimming in deep pools, had been mesmerized by the russet coats of jaguars emblazoned in rosettes, sat like next of kin to grieve with a female gorilla who had lost her mate. I fed spangled fish to a rare river dolphin and rubbed down the stony skins of white rhinoceros with warm oil. I had bottlefed the fawns of does who had died on the highway, snuggled in a sleeping bag with a zebra foal born too soon and watched emus dancing in the rain. I had even held hours-old red wolf pups in my hands, still slick from their mother’s tongue, ears and eyes sealed shut, little hearts beating fast. I had been lucky and I knew it.

But I had never, in all those years studying that wide array of animals, seen anything like the effulgence emanating from that wolf’s eyes. Not of this earth, ethereal, effervescent. The radiance seethed and shone, a deep pulsating emerald. Like jewels in sunlight. Stained glass in a church nave. In his unwavering gaze I saw all of God’s creation—the spines and spires of mountain ranges, all the blue rivers receiving rain from the sky and rushing to the sea and the sea accepting the gifts of silt and grit. I saw snow falling slowly from smoky clouds, the skeletons of old trees spare, bare and black in winter, fields of wildflowers caught in the throes of spring winds, the conflagration that is autumn. And lightning igniting like fireworks in a summer squall.

This animal had been caught by only a toe. The man who set the trap had called authorities; the wolf had offered no resistance, allowed a noose to be lowered around his neck, allowed himself to be led to the box in the back of the truck and taken to this place like a prisoner of war. He did not speak, he did not struggle. Or eat or drink. Yet I did not sense any fear festering in him, nor did his breath on my arm make goose bumps as he lay there at the mercy of the whim of man.

Urgent, high-level meetings were quickly called to discuss this crisis. A wolf had not been seen in this place for 70 years.

He was now incarcerated; he could be executed. As I knelt there, I suddenly understood his dire plight even as I knew the severity of my own. We were both trapped. His body was caged against the fervent freedom that he craved, against the pull of full moon and high tide, the imperatives of dusk and dawn, the cascade of seasons as the earth spins on its axis, the call of the elk and deer herds to be culled. And my mind was mired deep in the quicksand of sorrow.

I once kept a photograph of a pack of wolves wandering among a herd of bison with their calves lying sprawled across the landscape, placidly chewing their cud. I used the picture in my classes that I taught at the zoo. Wolves are always honest, I would say; in a language people cannot comprehend, they convey to their prey their intention to hunt or not to hunt. Wolves have a sixth sense about a sick animal, detecting disease the way dogs have been known to help doctors diagnose cancer in humans. They have just as much a role in the ecosystem as a black bear, big horn sheep or an eagle; they have a job to do. There has never been a documented case of a wild wolf ever killing a human being in the history of the United States; in that same span of time, human beings have killed thousands of wolves.

When we parted ways only an hour later, I was not the same person who had arrived on the scene. I saw myself reflected in those eyes, felt as though I had come home to myself, rematerializing from a wraith into some semblance of the human being that I had been. A writer. He had in that hour conjured forth from me a tumult of words that described his essence. A teacher. Once, standing in front of my classes I had put my hand to my heart when I spoke about the devotion of the mated pair who bond for life, touched my fingers to my throat when talking about their voices raised in song, the intricate, intimate, exquisite communications among them that we so barely understand. Now I smiled, suddenly recalling facts that once were daily on the tip of my tongue—wolves can hear a mouse moving three feet underground, wolf puppies are so playful they can drive the adults in the pack into loopy exhaustion, the pups’ father will bring food to the den for them, regurgitating it so that it is soft enough for them to swallow and digest.

As I turned to leave him, I realized I was borrowing from this creature a bit of his stoic bravery and taking with me a little piece of his soul, a whole lot of that light.

The outlaw wolf had won a reprieve. After his long-distance exodus, the decision came down deeming him unwelcome here in Utah and it was decided to send him back to safety in Yellowstone. He was tranquilized, tagged, weighed, measured and radio-collared before being released into the wilderness from whence he came.

Some had wanted him killed, others wanted to kill him. As a biologist, I was not naive about his potential power, his hunting prowess, the strength of his jaws, the plans he might have to bring down a cow or a sheep. But I also knew that into his elemental nature was sewn a deep reserve and shyness that asked him to stay away from man and his activities. And for the rest of my days I will always wonder what on earth made him risk his life for such a long, arduous and danger-filled journey.

Sometimes my sadness makes me cynical, but I cannot be cynical about the wolf. Six years after I met him on that far-away farm he was gone, shot a few days after the delisting of his species from endangered status. That irony is not lost on me.

I can’t help thinking that his death was the result of a kind of bigotry born of fear and misunderstanding. I am sad for the people who shot him as he fed on an elk carcass, sad that they never had the chance to look into his eyes as I had. I wonder if anyone who had known him could have pulled that trigger. I watch the rain falling as I write these words in requiem.

What I am mourning is his mysterious alchemy, the magic spell that he cast, something wild and ineffable and divine that is ebbing away each passing year as houses, hospitals, shopping centers, businesses and factories claim the land. I never got to hear him sing, but people I know told me they did hear him, on a starry evening just after dusk, only days before he died.

And as I sit here writing his eulogy, this world is a much less beautiful place. u

Jana Lee Frazier is an essayist and occasional contributor to the Washington Post. This is her first story for CATALYST. She lives outside of Salt Lake City, Utah. She is currently working on a novel.

This article was originally published on June 29, 2009.