Aiming for the best at Top Crops

This is a love story. To be fair, all tales of small farms are to some extent love stories. Ask any member of this new generation of farmer their reasoning behind choosing such a challenging and demanding profession for their livelihood and you are sure to receive a passionate answer.

However, the story of this farm is also a story of romantic love from the beginning.

While taking a food justice class at the University of Utah, Amanda Theobald signed up as a volunteer at BUG (Backyard Urban Garden) Farms as part of her community engagement component of the class. While there, she met Elliot Musgrove, a farmer with BUG, and the two quickly became enamored both with each other and their shared passion for local agriculture. 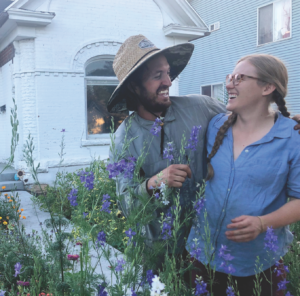 Starting a farm and a life together was the obvious next step, and while being rained out on a trip to Joshua Tree they brainstormed the name of their future farm; Top Crops, a reflection of their goal to grow the highest quality produce possible.

Initially, the vision for the farm was for both of them to work parttime jobs to support their farming habit. At the time, Amanda was working in apparel and was ready to make the leap to something more meaningful. “I was helping wealthy people express themselves through leggings,” she said.

If they dedicated all of their quarter-acre urban lot to vegetable production, they strategized, they could manage a handful of restaurant clients and pull it off. They began growing in both the front, side and back yard of their home, located just northwest of downtown Salt Lake City.

Not long after that, a half-acre lot across the street became available, and they jumped at the chance to expand. Vacant for 15 years, this new acreage allowed the couple to produce they volume of produce they would need to quit their jobs and farm full time, and that’s exactly what they did.

I recently visited this power farming couple, and was greeted by both Elliot and massive colorful flowerbeds between the sidewalk and their house. Larkspur, cosmos, amaranth and countless other flowers of various shapes, sizes, and colors buzzed with life. “The healthiest [vegetable] gardens I’ve ever been in had flowers on the edges. No two beds were the same,” said Elliot.

“We focus on mostly fast-growing vegetable crops, so it’s nice to have some beds that hang out, that you can pick from for a while,” he added. In addition to supporting both pollinators and predatory insects, these flowers also add a new component to their offerings, the addition of cut flowers, which Amanda spearheads.

Freshly prepared beds in the side yard then gave way to an open air prep and packaging area, with tall bundles of garlic and shallots curing from the rafters. Each square foot of their property is dedicated to their craft, and conveniently located to the home. Not more than 20 feet from their back door is a small 200-square-foot nursery greenhouse, shaded with burlap to protect the delicate seedlings from the brutal summer sun.

“We received a grant from Urban Food Connections, which allowed us to build two high tunnels. With the tools we now owned and some leftover materials, we were also able to build the nursery,” Elliot explained. 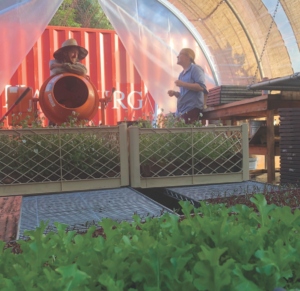 As they showed me the farm, it quickly became clear how both resourceful and efficient these two farmers are. They have received a number of grants from both Slow Food Utah and Urban Food Connections, so in addition to the high tunnels they’ve also been able to purchase a number of innovative hand tools, including their most recent upgrade, a five-row Jang seeder. “There is so much happy support for what we do in this town,” Amanda beamed.  They earn this support by being deliberate and thoughtful with each grant application. “We are careful what we ask for. It needs to either increase production or save time,” Amanda said.

Now in their third year as Top Crops, the duo provides produce to a number of local clients including Yoko, Rose Establishment, Raclette Machine, Blended Table and Laziz. They are also regular fixtures of both the Liberty Park Farmers Market on Friday evenings and the Downtown Farmers Market on Saturday mornings.  “We’re getting a really good idea of matching demand to our supply. We have hardly any waste,” says Amanda. Efficiency is key to a farm this size. “We want to be sustainable; for the soil, for ourselves, for how many hours we put in before we wear our bodies out,” she added.

A testament to this efficiency is that while they have nearly all of their space dedicated to food production, “we’re still under the neighborhood average for water consumption,” said Elliot. They are also ruthlessly efficient with their space. Their production is so intensive that there is rarely more than a few days between when a previous crop is pulled before the subsequent crop is planted. Their focus on fast-growing crops also allows them to squeeze in the maximum output from their small acreage over time.

The two are always pushing Top Crops forward, trying new things and working to market new crops. “I don’t think I’ve ever done it all right all the time,” Elliot reflected. They are also brutally honest with themselves, and while I was there I was struck by their complete lack of “hype.” As we walked past their tomato rows we stopped for a taste test. They both pointed out that the earliest of the tomatoes “tasted terrible. Really mushy. We think it was the cold.  Those will definitely not make it to market,” they agreed.

With their tastebuds in alignment with their mission, you can be guaranteed that both Elliot and Amanda will only ever deliver the best, the top crops.