The non-profit Little Free Library (LFL) was started in 2009 by Todd Bol in Hudson, Wisconsin. Thinking of his mother, a bibliophilic teacher, he built a miniature one-room schoolhouse and put it on a post in his front yard. He filled the schoolhouse with books. Bol encouraged his friends and neighbors to take the books and leave any of their own, to share with others. The schoolhouse was a success and led to Bol building more to give to these friends and neighbors.
This project eventually caught the attention of Bol’s friend, Rick Brooks. Brooks saw the good the Little Free Libraries were doing and helped Bol to start a nonprofit based around the schoolhouses. And it quickly grew. In the 10 years since Bol built his first Little Free Library, the number of libraries registered to his nonprofit has gone from a few in his neighborhood to over 90,000 around the world. This doesn’t include the ones people build and keep without putting them on LFL’s map.
In the Salt Lake Valley alone there are over 100 Little Free Libraries, with more throughout Utah. All of them are run by people excited to share literature with their community. People like local author Kate Birch.
Birch first learned about LFL while visiting her brother in Portland, Oregon—where they are abundant. As a lover and author of books (Birch is the writer of the Perfected series), she was immediately taken with the idea. So, for Christmas two years ago, her then-husband built and put up a little library in her front yard in Sugar House. Wanting her library to reflect the hidden purpose of a Little Free Library, to bring communities closer together, Birch painted a tiny mural of a Norse-inspired neighborhood in blue and white on the sides. 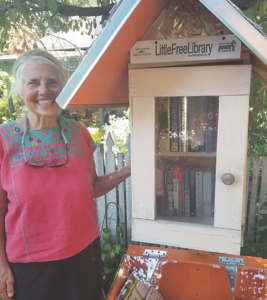 Birch is not the only one who wanted her library to reflect community. For Heather Seals and her niece Addison, putting up a Little Free Library was a way to do some good for their neighbors. Seals and Addison are always looking for a new service project to do together. When Seals first ran across a Little Free Library, while visiting Iowa City a couple of years ago, she knew this would be their next mission.
Addison and Seals aren’t just a philanthropic niece and aunt. They are also “book besties.” They love to share books with one another. So naturally, the idea of sharing books with the neighborhood appealed to them. What with finding the right cabinet, decorating it, gathering books and adding on special features, like a bench, dog treats and free bookmarks, it took them about a year to get the library set up.
Once it was done Seals and Addison realized they had a gathering point for other projects. Now, twice a year, Addison and Seals put a basket out next to their Cottonwood Heights library and start a collection. Sometimes it’s for socks to give to homeless shelters. Other times it’s food for the Little Free Pantries—neighborhood food-sharing boxes that operate similarly to the LFL (see the Catalyst, June 2019). No matter what the project is, their Little Free Library gives the community another way to come together.
Pam and Willy Littig have had their library up for 10 years. Even after all that time they say it’s still a work in progress. Willy is always adding something new. Recently he re-roofed it using scavenged, scalloped license plates. They’ve added a lower shelf for the children’s books. That shelf has changed as well. It’s gone from a basket on the sidewalk, that had to be taken in when it rained, to an actual shelf with a plastic lid. 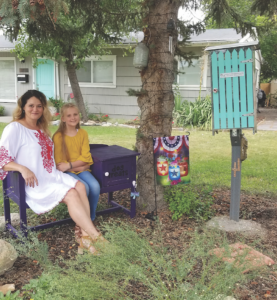 The Littigs put their library up after finding one along 12th East. They knew it would be a good addition to their front yard in the Avenues. Located right across the street from an elementary school, they especially wanted to get more kids reading.
While every Little Free Library is unique, there are a few things, according to their librarians, that seem to remain the same. One is that the libraries are used by every kind of person, but especially children. Birch recalls a neighbor girl who would come for a new book every week. Addison reports that it’s common to see a kid reading on the bench next to their library. The Littigs have a class of preschoolers that line up once a week to dig something out of their kids’ shelf.
Despite this regular patronage, the librarians don’t need to refill the libraries too often. Most LFL librarians always have books on hand, from thrift stores, garage sales, or their own personal shelves, but they don’t mind others restocking for them.
When it comes to what kind of books end up in there, these Salt Lake LFL librarians all seem to agree that it is mainly children’s books, self-help books, travel guides and books on gardening. These librarians also keep the gory books and overly religious books out of their libraries.
For those interested in putting up their own Little Free Library, all you need is an old cabinet (or materials to build your own box, or you can buy a library from LFL directly), a bunch of books you would like to share and $40 to register the library with LFL.
The last step is not necessary. However, registering with LFL gets you a charter number that you can use to put the library on their map, so that others can find the library easily. Plus, it allows you to help support the noble cause of literacy and community .

Katherine Rogers is a senior communications major at the University of Utah and a CATALYST staffer. She is always on the search for the next great read.

LittleFreeLibrary.org
You can use the libraries’ charter numbers to find them on the website’s map.
Kate Birch: 21292
Heather Seals & Addison: 56119
Pam Littig: 12892