B.K.S. Iyengar: What is his legacy, and what will be yours?
—by Charlotte Bell

September 6 was the 30th anniversary of my dad’s passing. Taken by a sudden heart attack while talking on the phone, his death was a huge shock. He was not old—63—and very athletic, vital and energetic. Here one moment, gone the next.

About a year after his passing, my sisters and mother and I got together for a few days. Reagan had just been reelected, and none of us was happy about it. As the conversation intensified, a sudden knowing entered my mind: Our dad is not gone. He’s right here in all of us.

My dad loved to rant about politics, and before his passing, Reagan’s imminent reelection was a huge thorn in his side. In fact, my last conversation with him included Reagan rants.

Of course there was more to my parents’ legacy than strong political opinions. My parents left family and friends many gifts: a love of music, art and cats; an affinity for walking; a healthy skepticism of authority; a DIY attitude; a slavish commitment to being responsible and punctual. My sisters and I have all, in turn, shared these qualities with the people we encounter.

When we die, a part—maybe the most important part—of us lives on in our families, friends, colleagues, enemies and sometimes in people we don’t even know. The parts of us that express who we are as unique beings leave a residue that stays long after our bodies are gone. I’m pretty sure we can never know the complete magnitude of our impact.

A day after his passing in August at age 95, B.K.S. Iyengar’s daughter, Geeta, wrote: “Only his body has ended. One person’s efforts from inside out, changed the acceptance of yoga throughout the world.”

Mr. Iyengar’s teachings live on. His influence is inextricably woven into Western yoga: attention to alignment, therapeutic application of Hatha Yoga, the props he invented to allow anyone to reap the benefits of almost any asana, his fierce demeanor and even fiercer dedication to practice and discovery. The most important aspects of B.K.S. Iyengar will live forever in the heirs to his yogic innovations.

I got to experience a three-week intensive with Iyengar in Pune in 1989. Practicing in India, the birthplace of Yoga, was rich beyond what I could have imagined. I had studied with many competent, insightful Iyengar-style teachers in the U.S. before traveling to Pune, but somehow being in India changed everything. The experience of weaving through Pune’s crowded, chaotic and colorful streets on my daily walk to the Institute dug deep, ancient, yogic roots into my soul. 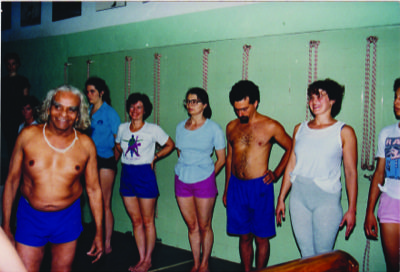 The classes in the intensive left me feeling continuously humbled. I felt that if three weeks of practice in Pune left me with even a tiny un­derstanding of Tadasana (Mountain Pose), I would have learned enough for a lifetime of practice.

Before I left for India, many veterans of Pune intensives warmed me that Mr. Iyengar would make me cry at some point. He was, of course, legendary for yelling, kicking, slapping and often tearing down his students. “It’s cultural,” my friends said, “Don’t take it personally.” This was a part of the journey I was not looking forward to. I don’t respond well to harsh inspiration. I steeled myself for the onslaught.

My experience with Iyengar could not have been more different from my expectations. Mr. Iyengar was kind to me. With the exception of one slap on the knee, during which he smiled and said, “Wake up your knee,” he was gentle and even jocular with me. In the six months previous to traveling to Pune, I’d gone through a difficult separation. By the time I met Iyengar, I felt emotionally battered. I believe that he sensed this, and understood that yelling, slapping and kicking were not going to be helpful.

I did see him yelling and making an example of others though, and it made me flinch more than once. It is an unfortunate part of his legacy, in my opinion, that some of his teachers felt compelled to take on his stern and often angry demeanor. The few times I took workshops with these intense, though competent, teachers, I felt my practice shrink. I gravitated instead to teachers with a gentler approach.

Iyengar’s most famous legacy was his attention to alignment. Before he coined phrases such as “four corners of the feet” and “big toe mound,” asana practice was much less disciplined. Pre-Iyengar practice was less precise, and probably in some ways, less effective. His focus on alignment was meant to unify the body for the sake of body-mind integration. When continuity reigns, prana flows. When prana flows, the mind becomes alert and calm. Then meditation arises spontaneously.

Still, one particular instruction—aligning your pelvis in standing poses so that they are between two imaginary plates of glass—caused long-term damage to my hip and SI joints. Though I abandoned that instruction years ago, the physical residue lives on in my cranky joints. The mental/emotional residue resides in my regrets for having repeated that instruction early in my teaching career.

One thing I admired about Iyengar was his endless curiosity, and his willingness to abandon long-held alignment principles when he discovered something new. Countless times over the years, I’ve heard his senior teachers say: “Iyengar’s not giving that instruction anymore. Try this.” I appreciate this. He was clearly a master, and yet he did not carve his alignment instructions in stone. He was known to be adamant about his alignment points, but he was always willing to let them go in favor of something he felt worked better.

Iyengar’s legacy for me is this: When you are practicing, just practice. Devote your heart and soul. Practice with integrity. Don’t chain yourself to your ideas. Be attentive to what and who’s in front of you. And I will never forget the kindness and gentleness he extended me at a time when I really needed it.

Each of us is continuously giving to the world around us. When our bodies no longer walk this Earth, we will still live on in the hearts and minds of those who follow. What do we want your legacy to be?

This article was originally published on September 27, 2014.