Yoga Pose of the Month: On Hip Joints and Humility

For the past two years I’ve had the privilege of attending retreats at Spirit Rock Meditation Center led by Joseph Goldstein. Co-founder of the Insight Meditation Society, Gold­stein has written or co-written—with the likes of the Dalai Lama, among others—11 classic books on mindfulness practice.

His voice has been a constant in my three decades of mindfulness practice. On silent vipassana retreats with my mentors, Pujari and Abhilasha Keays, we listened to Goldstein every day. This adds up to 200-plus hours of listening time for me over the years, not counting the many road trips I’ve taken with Goldstein in my car’s cassette deck.

I’m exceedingly grateful for this. I could have stumbled into any practice and any teacher, but Goldstein’s intelligence, articulateness and humor have been the perfect guide for my temperament. In recent weeks, I’ve been pondering what I believe to be the most important quality of any teacher, and I keep coming back to another quality Goldstein has in spades—humility.

In his talks, he regularly recounts misunderstandings that have led him to deeper understanding. After sharing a particularly humorous one, he said (and I’m paraphrasing), “Sometimes I think my path has been about making every single possible mistake.”

Later this month, I will be getting a new left hip joint. A recent x-ray showed “end-stage” degradation, meaning there’s no cartilage left and bone spurs have begun to fill the gap where my cartilage used to be. I’m not surprised. Over the past few years, standing, walking, sitting and lying down, basically everything, has been pretty painful. The diagnosis was actually a relief. Now I know there’s a pathway back to a more enjoyable life.

But you practice yoga!, you say. How can that be? 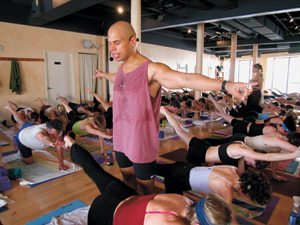 My first response is, it runs in my family. My mother had her hip replaced; my younger sister believes she may be headed in that direction. From my gymnast dad, I inherited extreme hypermobility. The combination probably gave me a greater-than-normal predisposition to joint damage.

I also believe that some of the things I did in my yoga practice in my 20s, 30s and 40s may have hastened the process. There’s no way of knowing, of course, how much genetics contributed to my joint’s deterioration and how much my practice contributed to it, but at the root of whatever role my asana practice might have played was a lack of humility.

Because of my genetic inheritance, I could do all kinds of extreme poses and none of them hurt. I was, in fact, listening to my body, but as long as there was still some cartilage in my hip joint, I wasn’t going to feel its gradual thinning. Cartilage has no enervation. You don’t feel pain in a joint until the cartilage is gone.

Several of my yoga asana mentors —Donna Farhi, Judith Hanson Lasater and Mary Dunn, in particular—suggested I focus less on increasing my flexibility, and instead pull back and build stability. Had I been more humble at the time, and less invested in being the most flexible person in the room, I might have taken their advice. Humility may have compelled me to listen and take to heart what these very capable teachers were telling me.

It’s safe to say I’m now sufficiently humbled. While I’m exhausted from being in constant pain, my unhappy hip joint has taught me a lot. The bone-on-bone experience gives me instant feedback. I’ve learned a lot about which poses, alignment instructions and approaches to practice can potentially cause harm —instructions and approaches that are still popular in mainstream yoga —and the importance of creating continuity through all my joints.

Despite what I just spent three paragraphs writing, I’m not chastising myself. I practiced with the best information I had at the time. I went out of my way to work with the most experienced, respected teachers, who were also teaching from the best information they had at the time. We were all doing our best, and we have all learned a lot and have adjusted our teaching accordingly.

Like Goldstein, my path has been about making mistakes and learning from them. Sometimes I think that I’ve unintentionally made my body a guinea pig for the sake of becoming a more well-rounded teacher. It’s really okay. Humility keeps me honest. It also keeps me curious.

One thing that struck me about practicing with Goldstein is his endless curiosity. With the respect he’s earned from his decades of practice and teaching, he could easily rest on his laurels. Yet, his humility and passion for the dharma give him an insatiable desire to keep learning, to understand what he thought he knew in different ways.

This is what I admire most in him, and what my hip joint is teaching me. We never know it all, and knowing this, we never have to stop learning. Being able to do many of the extreme, fancy poses in my youth did not make me a better teacher. It did not help me understand what my less flexible students —which is most of them—were experiencing and how to help them develop a balanced practice. Having a hip joint that screams every time bone hits bone has taught me way more than doing fancy poses ever did. I’m looking forward to what my new titanium hip joint has to teach me.

This article was originally published on February 28, 2015.