Yoga Pose of the Month: Hanumanasana

Leap into fall.
—by Charlotte Bell

In the June issue, I recounted the story of Anjaneya, a child prodigy—part monkey, godson of the wind god Vayu, and reincarnation of Shiva—that got himself into trouble for making a giant leap for the sun without the sun god’s permission. Long story short, Anjaneya was not only absolved of his crime, but even elevated to god status. Dubbed Hanuman, he took the form of a monkey-god.

The Ramayana, an ancient Sanskrit epic, tells the story of Hanuman’s most famous good deed, a heroic leap to save the sensuous Sita from the ravages of the greedy ego maniac Ravana, who had abducted her from her home in the woods where she lived with the beneficent prince, Rama. So devoted was Hanuman to Rama that he offered to go to Sri Lanka and rescue her. Hanuman leapt on the wind, legs splayed fore and aft, and in one giant leap, spanned the ocean to rescue Sita. The animated film, Sita Sings the Blues, tells the whole story of Rama, Sita, Ravana and Hanuman with colorful, tuneful brilliance. It is very much worth watching. You can find it online. 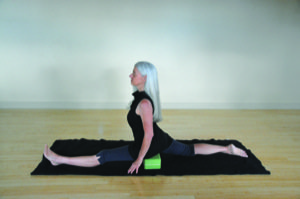 This month’s pose, Hanuman­asana, symbolizes the monkey god’s heroic leap. We don’t need to have gymnastics chops to leap in the yogic sense, though. The simple act of extending one leg forward and the other back—any amount—and breathing deeply allows us to expand and be buoyed by the breeze of our own breath.

Hanumanasana is challenging for just about everyone. And that’s the point: It’s a leap into the unknown. As always in asana practice, what your pose looks like is completely irrelevant. In the yoga tradition, mastery of asana is defined as the stage when effort is relaxed and your mind is absorbed in the Infinite, not when you reach the most extreme version of a pose. Challenge yourself to relax effort and let go into “being” the pose as it is, rather than forcing it.

First, it’s a good idea to stretch the quadriceps and the hamstrings. Start with some relaxed forward bends or standing poses such as Triangle (Trikonasana) and Lung pose (Anjaneyasana ).

Place a yoga block on either side of your pelvis and place your hands on your blocks. Start with the blocks in their tallest position. Now slide your right foot forward and your left knee back toward what we Westerners call “splits.” If you’re using two blankets, your blankets will slide along the floor under your knee and foot. At whatever point you feel resistance in your legs, stop, adjust your hand-support blocks to a different height if need be, and relax and breathe deeply. After five or 10 breaths, return to a kneeling position for a few breaths before switching to the other side.

If you are close enough to the floor to place a block under the hip of your front leg (as in the photo), this is a nice way to practice, as it frees your hands and shoulders. I like to practice Hanumanasana at least twice on each side, because quite often the second time feels more easeful.

Hanumanasana stretches the quadriceps, hamstrings and hip flexors. As you simultaneously open the fronts and backs of your legs, your stride becomes smoother and longer, making giant leaps more accessible. As the heroic leap from the known to the unknown becomes easier, the expansive realm of your potential becomes your home.