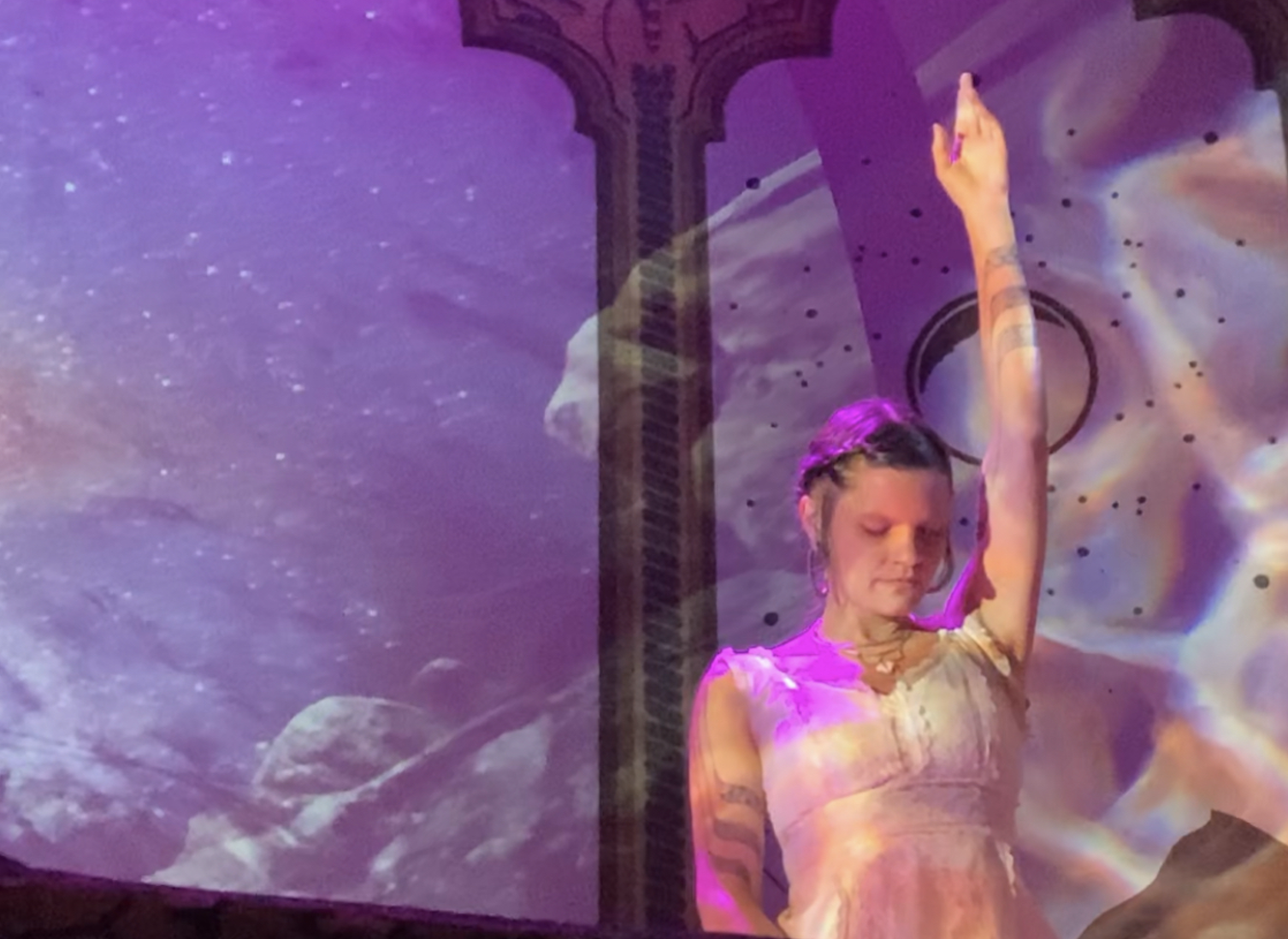 The act of going within to heal, however needed these days, easily gets pushed aside like the pile of holey socks and shirts that has been sitting in my closet for a year… or more. And what a year to heal from!

YAIMA, a Seattle-based folktronic duo made up of multi-instrumentalist Masaru Higasa and vocalist Pepper Proud, came to Salt Lake City last week to inspire some of that healing with “Standing to Heal the Earth,” their interactive evening of music, visionary art, breathwork and a cacao ceremony at Clubhouse on South Temple. Presented by Live Nite Events, it was a sold-out show and safe to say I wasn’t the only one who had some mending to do.

The 1913 brick building, which used to house the historic Ladies Literary Club, has long been lovingly referred to as “the Clubhouse.” The band name, Yaima, comes from both the Mapudungun language (spoken by the Mapuche people of Chile and Argentina), meaning “that which water runs through,” and from the culturally preserved Yaeyama District of Okinawa Japan.

Much like an ecstatic dance event, upon entering I removed my shoes, turned off my phone, and settled onto my yoga mat as instructed. Basking in the warm glow of Clubhouse’s overhead string lights, I was surrounded by other happy hippies of all ages, sipping on local Hans Kombucha––the only beverage that was served from the lobby bar. The space had been decorated with four woodwork mandalas in each direction of the room. Each mandala represented one of the four organizations to which a portion of the show proceeds would go. These included Redrover (an animal rescue nonprofit) to represent fire, Our Children’s Earth Foundation (which runs clean air campaigns) to represent air, Pure Blue (a community of water-wise activists and experts) to represent water, and Pachamama Alliance (a sustainability alliance) to represent earth, which was located at the foot of the stage.

The first hour was for breathwork and a cacao ritual led by Boulder, Colorado-based Innerlight Revival, which thoughtfully eased us into the experience. “You don’t need to fix anything,” said Aja of Innerlight Revival, as we all sat on yoga mats and blankets fanning out from the ornate stage. Her suggestion gave us a moment to exhale from a period of time that has felt like everything has needed fixing. Perhaps the wording––“fixing” is what’s been keeping me from the pile. Fixing feels like work. Inundated with constant news of brokenness, I’m more drawn by words like “play” and “rest” right now.

During Yaima’s set, some stayed seated and moved closer to the stage, while others danced in back. The pair of musicians, on white fluffy faux fur blankets, stayed seated throughout the entirety of their set. Among all of the additional visual effects—projections of nature scenes and dream-like imagery lighting up the stage and a disco ball on steady rotation—it was Pepper’s balletic hands often pressing into mudra that kept me the most entranced for the entire hour. With a single hand in the air, Pepper could keep the crowd rapt in perfect silence, until Masaru Higasa would take it away on his banjo, guitar, synthesizer, and the like, and the crowd would sway into dance. Pepper’s angelic voice paired with Masaru’s eclectic and precise instrumentation/production also brought a sense of calm over the movement.

“Come out of hiding, let your face see the light,” echoed Pepper’s lyrics through the room. I surveyed the crowd—some of my first since 2020—which included several children, a few men with gray beards, and everyone in-between with some enviable tattoos. Several images of this crowd stood out: tapestry-adorned souls dancing with reckless abandon, a man standing with his hands over his heart with eyes closed for minutes at a time, extra-long embraces, and the long-lost art of exchanging smiles with strangers.

“Free from all old stories I’ve been told, I walk through the valley of my own shadow…” goes the chorus of Yaima’s most-played song on Spotify, Gajumaru, a slower-paced meditative-like track from their first album, Pellucidity (2014). As I observed the subtle shift in my own presence throughout the night, certainly relating to ‘walking through the valley of my own shadow,’ I emerged from the main room feeling uplifted. The lobby was filled with a merch table selling albums, Kabbalistic and Sufi symbolic woodwork and rose oil. As I exited the building, one of the Innerlight group members offered me a flier for one of their upcoming retreats, and offers, “Go on a nice journey.”

As I made my way home, I exchanged friendly salutations with an older gentleman smoking on the corner, likely a resident of the nearby dilapidated apartments. My pile of inner mending felt slightly lighter, and my capacity to accept the pile felt greater. Did it feel like work? A little bit, but it also felt like rest and play, or rather––healing.

This article was originally published on July 26, 2021.