Women of the World 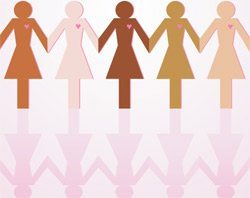 When people kill, something happens inside of them—a line is crossed and, generally, [because] in war men do most of the killing, men have crossed that line. So women can be peacemakers. Women can be the weavers back of that society.
— Susan Collin Marks

In many parts of the world, March 8, International Women’s Day is a national holiday. It is celebrated as a day when women reflect on past accomplishments and refocus their energies as agents for peace, justice and participatory citizenship on an equal status with men, while working to abolish women’s poverty, exploitation and discrimination.

{quotes align=right}In war-torn spots around the globe, women and girls suffer disproportionately from the devastating effects of war; they are often deliberately targeted as a way to break down morale and resistance.{/quotes} Yet women are usually excluded from positions of power and marginalized in peace negotiations.

Fostering women in roles of leaders and peace builders is the objective of Peace X Peace (pronounced “peace by peace”), an organization created in 2002 during a three-day discussion among eight women from diverse cultures. Through their global network, Peace X Peace uses the Internet to connect women’s groups, or circles, in the USA to sister circles in other countries, so they can come to know one other directly and personally. By sharing experiences and expertise, these woman-to-woman connections turn strangers into friends and have the potential to affect future decisions and create a global culture of peace. In a few short years, Peace X Peace has grown to nearly 5,000 members, with more than 800 circles in 57 countries.

In observance of International Women’s Day, a representative from Peace X Peace will be in Salt Lake City on Saturday, March 10, to present “Peace X Peace Day.” This day-long event will include a workshop, “Connecting Women for Peace,” a screening of the award-winning documentary “Women on the Frontlines,” and a discussion of current issues women face locally and globally.

The documentary was first screened in Salt Lake last year. Since then, two local groups, Tinogona and Moonlodge, have made connections through the Peace X Peace global network.

Moonlodge, formed in 1990, is a circle of women who support one another on their spiritual paths, drawing from a variety of spiritual approaches with an earth-based Native American influence. Their sister circle is the Irienne Green Belt-Muchi group from the Kenyan town of Meru, located in the east-central highlands. Kenya suffers from decades of tribal conflicts, swelling population, and government corruption and mismanagement. The AIDS epidemic has left more than 1 million orphans in Kenya. The country is also a major host to refugees from wars in Somalia, Sudan and Uganda.

The Irienne Green Belt Circle is associated with the Green Belt movement begun by Wangari Maathai, who received the 2004 Nobel Peace Prize for her work, proving that healthy environments promote peace. Since 2003, the Irienne Green Belt Circle has planted trees in forests, on farms and around public areas such as schools and hospitals. They also fashion bead necklaces and other craft items which they sell to help group members secure food and clothes for their families and grandchildren left behind by their daughters.

In support of their Sister Circle, Moonlodge is committed to building a deeper understanding of their lives and culture, accomplishing this through the exchange of autobiographical sketches, music, and proposed earth-based projects.

Tinogona (a Shona word meaning “that which is achievable”) is a newly-formed circle which came together in 2006 to work locally on promoting fair trade. They are connected to a Sister Circle in Uganda, Hope for Namuwongo. Most residents of Namuwongo, an urban slum district on the outskirts of Kampala, are refugees from the ongoing 20-year conflict in northern Uganda. Many suffer from AIDS, tuberculosis or malaria. Children often lack adequate nutrition, health services and education. Technically, Namuwongo is an illegal settlement, lying on government-protected wetland, so most of the approximately 10,000 residents face possible eviction. The people of Namuwongo live in extreme poverty and eke out a living making crafts from recycled local materials, creating paper beads, baskets, table mats and sculptures to earn money to support their families. Because the market for such crafts in Uganda is small, Tinogona hopes to assist its sister circle by searching for other markets for these handicrafts.

{quotes}Women attending the Connecting Women for Peace workshop will learn circle principles and see how women’s  prayer groups, book clubs, study groups or friends and family can connect with women globally through Peace X Peace.{/quotes} Tinogona and Moonlodge hope the workshop will encourage more local groups to make these connections and reach out to other cultures. Also sponsoring this program are Ten Thousand Villages, Westminster Roots and Shoots, the SLC Film Center, Utah Domestic Violence Council, the National Conference for Community and Justice of Utah and Planned Parenthood of Utah.