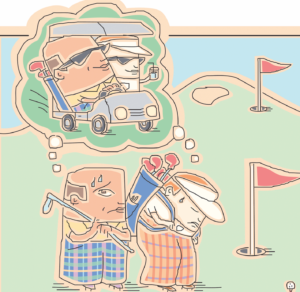 I  see a lot of CrossFit people flipping tires end over end across fields and gym floors in Cache Valley where I live. They might be strong, but don’t they know that it is easier to move tires by rolling them right side up? That’s literally why wheels were invented.

I guess CrossFit is a sport now because I saw a competition on ESPN 10 when I was stuck in a motel last month. I’m not picking on CrossFit; all sports are insane if you think about them even a short bit. We just assign loftier meaning to justify the ones we support. They fall into several categories:

Sisyphean sports: So many of our sports require frustrating repetitiveness for the sake of precision. The tire flippers moved their burden to the other side of the field only to have to move them back again. Any outdoor track race exceeding 400 meters requires repetition. The same goes for swimming races that exceed 25 yards. In some long forgotten time, we used these activities to get from one place to another. In modern life you may still use these muscles to swim away from a shark or run to catch an escaping food truck.

Point to Point sports: After my track days were over I enjoyed doing road races because at least you felt like you were taking a tour of the countryside on your legs. Except for the crazy indoor variety, bike races also make an attempt to get from point a to point b in beautiful places like France. It’s not even called a race, it’s a tour which sounds rather relaxing though I’m sure it isn’t.

Sitting sports: Car racing and poker are considered sports. I know they take skill, reflexes and courage, but so does writing and nobody wants to pay to watch that. Golf is available in both sitting and hiking versions. If you actually walk 18 holes on a hot day you are hiking with intermittent stops of joy or frustration. If you use you cart, golf is primarily a sitting sport. When I walk the golf course I note that the trash cans are full of empty beer cans, chip bags and chicken wing containers. There aren’t many sports other than bowling and pool where you can eat and drink during the process.

Sports ball sports: We are most comfortable with the “round ball sports:” Basketball, baseball, soccer, volleyball, golf, bowling, tennis, bocce, billiards, table tennis and pickleball all rely on the manipulation of round things. Round things just move through the world better than most other shapes. Football, ice hockey and curling are near-round object sports.

New sports that are games: I had to read it to believe it, but there really are millions of real people who pay to watch other real people play online games involving non-real people. Universities have teams and some cities are creating dynasties of quick-fingered cyber athletes. It does make some aesthetic sense that the only people getting beat up and decapitated are imaginary people.

Gravity sports: I know this is becoming a generic term for rock climbing, skiing and jumping off things in wing suits, but aren’t all sports gravity sports? Just try playing table tennis on the International Space Station. You will more fully appreciate the impact of gravity as you get older.

Dennis Hinkamp often swims in circles and rides a bike that goes nowhere.