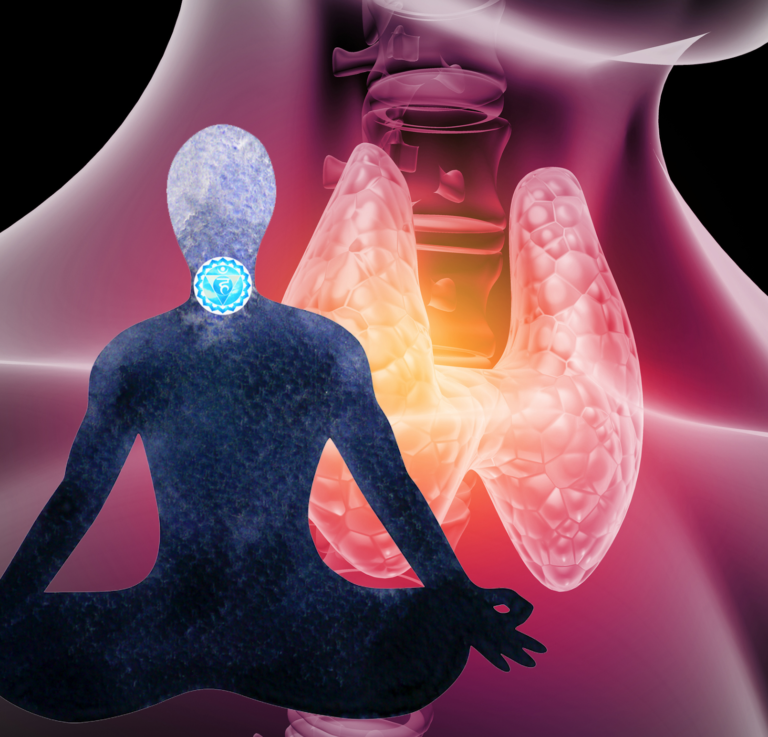 Governs: our metabolism during activity and determines our resting metabolic rate.

Externalizes: as both the thyroid and parathyroid glands.

When balanced: we feel harmonious.

Color: a harmonic of BLUE.

Deficiencies: manifest as stifled creativity, repressed communication and an inability to speak our truth.  Often these feelings are described as a lump in the throat or that the cat has got our tongue.

Excesses: appear as incessant chatter, or loud and boisterous behavior.

Throughout history, humans have chanted as a form of praise or to enter deep states of meditation and worship. All of nature chants, from thunder to birds to the rustling leaves of the aspen tree. Only modern humans have forgotten to chant. As a result, we have become disenchanted with our world. To become enchanted literally means to be roused to ecstatic admiration.

Many years ago, I heard a tape which had crickets chirping over a background of what I thought was a choir of humans singing. A few moments into this beautiful mix a woman explained that what was being heard was not a human choir. The “choir“ was the exact same recording of the crickets slowed down to a frequency resonant to that of humans. The intended effect was a dazzling and delightful way to show that all of creation exists in a constant state of praise and gratitude, that this is our natural state. The chanting is not in praise of some being far removed, but in praise of being itself; in fact, the sound of praise, emitted in a million different ways through vibration, creates the universe.

[Listen to and read about this recording: www.snopes.com/fact-check/god-39s-chorus-of-crickets/]

This belief that sound is responsible for the creation and maintenance of the material universe is held by many spiritual traditions. Our vocabulary is full of associations that reinforce this concept. A destructive idea, someone whose judgment is falling apart, and an unstable structure are all called unsound. The fact that we use the word “spell” to describe the creation of words, as well as the invocation of magic, shows the inherent creative power we attribute to language and sound.

The endocrine glands which interface with the fifth chakra are the thyroid and parathyroid glands. The parathyroid glands rest upon the surface of the thyroid and are responsible for maintaining calcium and phosphorus levels in the blood. The thyroid is a butterfly-shaped gland located at the base of the neck in front of the trachea or windpipe. The thyroid acts as a thermostat which controls the body’s temperature and regulates metabolic rate of every cell in the body.

Thyroid-stimulating hormone (TSH), which is secreted by the pituitary gland, controls the amount of hormones produced by the thyroid gland.  Thyroxin or T4 accounts for roughly 80% of hormones secreted while the remaining 20% is liothyronine or T3.  T4 refers to the presence of four iodine atoms attached to several molecules of the amino acid tyrosine. T3 is produced, in the thyroid and throughout the body, from T4 by the enzymatic removal of one specific iodine atom. T3 is much more metabolically active than T4. Whether the thyroid is under or overactive, the deleterious consequences of its malfunctioning can be extensive.

Hyperthyroidism is due to an excessive amount of thyroid hormones.  Symptoms include an increased body temperature, jitteriness, restlessness, anxiety and insomnia. Hyperthroidism frequently triggers an irregular rapid heart rate called atrial fibrillation. Left untreated, this arrhythmia  can sometimes be fatal.

Hypothyroidism results in an underactive metabolism most often due to an insufficient amount of thyroid hormones. The problem can occur from a failure of the thyroid gland or from a deficiency of the hormones that stimulate the thyroid like TSH.

Testing the levels of free T3 and checking antibody levels in addition to the standard thyroid panel will result in more accurate diagnoses.

Much newer information involves also checking levels of Reverse T3 in relation to total T3. The science and reasoning behind these concepts arebeyond the scope of this article.

As much as 40% of the American population may suffer from some degree of hypothyroidism or hypometabolism, according to Broda Barnes, MD, a clinician and longtime researcher specializing in thyroid physiology. While medical diagnostic standards have continually evolved and improved over the course of this century, Dr. Barnes’ simple measurement of basal body temperature remains a reliable indicator of one’s metabolism (see sidebar).

It is important to remember there are other causes of a low body temperature. Another forgotten but invaluable indicator of hypothyroidism is a simple reflex test of the Achilles tendon. A delayed or sluggish response is a strong indicator for hypothyroidism.

How to treat hypothyroidism

A variety of natural and synthesized thyroid hormone preparations are available to treat hypothyroidism. The standard Western medical treatment is levothyroxine or T4. Synthroid and Levoxyl are simply brand names of T4.  This is not always effective for, or well tolerated by, every patient. Cytomel is a commercially available prescription containing only T3. Commercially available replacements which contain both T3 and T4 include Thyrolar, and desiccated animal glandulars from bovine and porcine sources like Armour Thyroid, Naturethroid and Westhroid among others.

Some benefits of desiccated bovine or porcine thyroid glands have been attributed to the complete range of thyroid hormones present in the glands. Although these work well for many, they are not appropriate for everyone. Working with an experienced practitioner, compounding pharmacies can create exacting customized prescriptions.

It may take several trials with various preparations in different dosages to discover what is optimal for you. It is also important to recheck the thyroid blood panel periodically. Clinical response, however, is often the most important indicator of optimal dose.

In addition to tyrosine and iodine, proper thyroid function depends on a variety of other nutrient cofactors.  These include certain B vitamins, essential fatty acids like evening primrose oil, and the minerals zinc, copper, manganese and molybdenum. Iodine in excess and its close relatives fluoride and chlorine, can all inhibit thyroid hormone formation. Mercury from dental amalgams and food contaminated with a variety of other environmental toxins have also been reported to reduce metabolic efficiency. Choose your food and water sources carefully.

Activities to harmonize the fifth chakra and balance your metabolism involve expression and creativity.  Sing, speak your mind, chant or join a drumming circle. Learn to play a musical instrument. Generously praise the people in your life. Sit quietly in nature and enjoy to the symphony of sounds around you.

Todd Mangum, MD, of the Web of Life Wellness Center in Salt Lake City, is a holistically oriented physician in practice for 30 years.

Editor’s note: The Chakra Series, by Todd Mangum, MD, first appeared in CATALYST in 1995 and was repeated in 2009 and 2013. These stories remain among the most read in our online library. In 2020 we are bringing you an updated version, which began with January’s Introduction to the Chakras.

Shake a glass thermometer down before you go to bed and leave it on your nightstand. Upon awakening and before getting up or moving around, take your temperature by placing the thermometer in your armpit, not your mouth. Leave it there for 10 minutes. Take at least six readings, on different days, and average them together.

Menstruating women should do the test during the first week of their cycle. Men and postmenopausal women can do it anytime.

If your average temperature falls below 97.4 and you have several of the symptoms described in this article, you might very well suffer from hypothyroidism. Consider working closely with a healthcare professional to improve your metabolism.