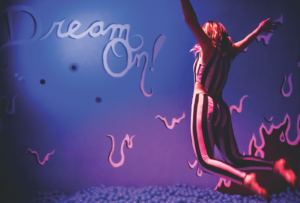 Dreams rarely make sense. But frankly, reality doesn’t always make much sense either. The planet’s garbage crisis is just one absurdity of reality that comes to mind. Why should more whimsical things like sliding off a giant toadstool, navigating through a glowy kelp forest, or staring into a starry bathtub be any less a part of our sensical reality than (true stories) a hotel in downtown Salt Lake sending hundreds of perfectly functional TVs straight to the dump because they were remodeling, or perfectly usable paint being shipped out of state to be disposed of when there are artists in our community who could use it? I beg to ask, which should be parts of our reality? And which absurdities should we let fade away in a cloud of amnesia as we rise from our pillows to a brighter day?

A recent trip through Dreamscapes, the Utah Arts Alliance’s (UAA) newest pop-up immersive art exhibit in the former home of The Gap in The Gateway Mall, left me with some hopeful reminders that the nightmares of reality can (and need to) be addressed by the delights and desires of our dreams. 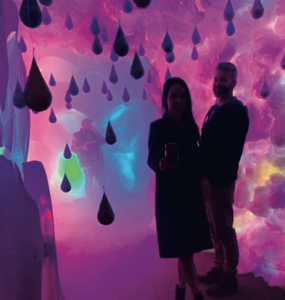 Constructed of 90% upcycled materials, over 100 volunteers and artists created Dreamscapes in under a month. UAA took donations from 3Form, the Salt Palace (which always has a multitude of abandoned exhibit materials from conventions), Clever Octopus and the Habitat for Humanity ReStore to build out the 14,000-foot space where you can “dream with your eyes open.”

It was only last summer, while sitting by the goldfish pond at the CATALYST office, that UAA executive director Derek Dyer was dreaming with his eyes open as he recounted his recent trip to Santa Fe, New Mexico, where he visited at House of Eternal Return, an immersive art experience by the artist collective called Meow Wolf. Meow Wolf’s productions influenced the creation of Dreamscapes.

Dreamscapes’ first iteration debuted at UAA’s ILLUMINATE, the two-day light art and creative tech festival in November 2018. This more complete, 14-room version of Dreamscapes opened March 15, 2019, and extended their original closing date. Then UAA announced in the end of May that the exhibit will run indefinitely. UAA has been working with Vestar, the corporation that owns The Gateway Mall, on making the Gateway a vibrant part of Salt Lake’s community. UAA is now working on adding new rooms, performance elements and mixed reality experiences to Dreamscapes, says Dyer. Five to 10 artists in the community will receive grants to build out different parts of the exhibit. The new installations will be staged at the Dreamspace Maker’s Space, a mobile classroom space at the the Arts Hub (UAA offices just behind the Gateway) so the upgrades to the existing Dreamscapes spaces will be as seamless as possible. 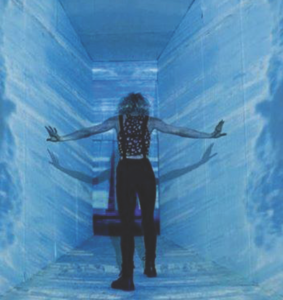 “We have sold out many dates and people still want to come, so we will stay open with this version of Dreamscapes for the time being,” writes Dyer via email. UAA’s goal is to continue creating spaces like this. This is really just the beginning, from the sounds of it. “I feel more resolved than ever that this is needed and necessary, and to continue to work toward making this a permanent immersive art space in SLC,” says Dyer.

The exhibit is loosely based around the storyline of a hero’s journey: Crisis leads to self-inquiry, a transformation, and ultimately victory. The layout begins in a living room scene, the “ordinary world or status quo comfort zone.” Visitors enter “the unknown or the special world,” with fairytale elements of an enchanted forest, with toadstools and friendly forest creatures–the beginning to a pleasant dream. Upon diving deep into the underwater world, visitors face challenges and temptation (think underwater garden of Eden), a number of psychedelic twists and turns, and at the climax, finally must confront the self in a mirrored maze. The notorious ball-pit room is the celebration at the end of the dream. The words “Dream on” are painted on the wall above the ball pit. A chalkboard wall asks visitors to share their dreams as they exit the dream world and make their way back to reality. The next part is perhaps the most photographed portion of the exhibit, the white room covered in rainbow stickers by visitors. This part, very similar to Japanese artist Yayoi Kusama’s famous dot-covered Obliteration Room, is where visitors begin to re-enter reality. The rainbow stickers, like little souvenirs from our dreams, are used to color in the canvas of everyday life. 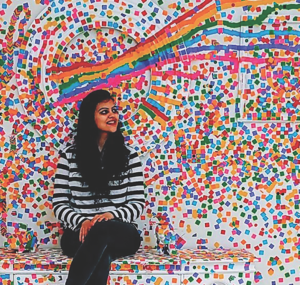 On my visit this is where I encounter Jonathan King, the UAA’s events coordinator, who is handing out the rainbow stickers to all who enter. “Make a mess!” He says to a kid who approaches him for some stickers. “You can put them anywhere, but the spot where there isn’t already a sticker is the magic spot,” he says.

King tells me the source stories of some of the elements. The balls in the ball pit? “They’ve been to all kinds of events in SLC, including a Hugh Jackman concert, a NYE party at the Capitol, Jazz games, et cetera,” says King. Some of the walls came from a doTERRA exhibit at the Salt Palace.

This project began their “excuse to saying yes to everything,” taking donations of all sorts, and letting artists contribute their work in a very organic way, says King. Apparently during the making of the exhibit, different art projects would spring up quite randomly, little corners being filled in here and there, a dollhouse here, a mural over there. The dream is for visitors, as much as it is for artists, to bring the things they’ve dreamed of into reality. “Dreamscapes is a combination of concepts that include the idea of the creation of dreamlike worlds that people can explore as well as allowing artists to create art of their dreams and connect that with the community,” writes Dyer.

Not only was Dreamscapes built with mostly donated materials that otherwise would have gone to waste, they also sourced materials that were already at the landfill. UAA apparently has a great relationship with the Salt Lake County Landfill. King tells me whenever they show up at the dump, the employees greet them with an enthusiastic list of the day’s collections.

For over a year, Dyer tells me, the Salt Lake County Landfill has been keeping spray paint by request, to save for UAA to pick up for many of their events including Mural fest, Urban Arts Festival, and now Dreamscapes. It costs the county around $750 to ship these unused paint barrels to a proper disposal site in Texas–or they could find an artist in town who needs it. This saves the county the shipping expense and simultaneously helps out a local artist.

From entire barrels of paint, to hundreds of TV screens, UAA has become a hub for sourcing leftover materials to local artists and organizations. With many sleepless nights, and a frenzy of activity to finish the exhibit, Dreamscape was a passion project for a lot of those involved. Many participating artists were compensated for their work with paint or plastic which UAA had collected.

The Salt Palace Convention Center has also been a big source for materials in Dreamscape. Whenever big conventions come to town spending hundreds of thousands of dollars on exhibit materials, the salvageable remains are for Chance Thompson, Sustainability and Public Relations Senior Manager to find a new home for. Many recent exhibit materials have gone into making Dreamscapes.

While the next phase of Dreamscapes is already under way, the exhibit that began as a pop-up no longer has a set closing date. UAA’s bigger dream, however, seems to still be in the works. The emerging theme from Dyer and King is that they’d like to replicate the resourcefulness and sustainability aspects that helped create Dreamscapes at a low cost and partner with larger corporate pop-up exhibits. Helping larger pop-up companies source donated, leftover, and reused materials for their exhibits serves the potential for creating more sustainable exhibits, and in cases such as the repurposed paint barrels, saving the county (and taxpayers) money on waste management fees.

Given the harsh realities of life, we tend to get distracted by our impediments: “If I only had… [you fill in the blank],” “I don’t know how to do [you fill in the blank],” and of course, “Doing the responsible thing right now seems way less fun than [you get the picture, fill in the ol’ blank with a myriad of things].” Dreamscapes challenges this notion from inside out, daring us all to dream big, and focus on the abundance, rather than the absence, of everything we need and want out of this life.