A concert of Utah's 1960s folk music or the best family reunion you'll ever go to. 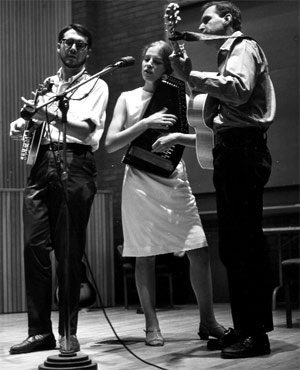 “The world does not belong to the young. I was here first.”
– Bruce “U. Utah” Phillips.

Forty-odd years ago, the whole United States was caught up in a folk music revival closely associated with the anti-war movement and liberal politics of the day (and which eventually inspired the hilarious Chistopher Guest comedy “A Mighty Wind”).

Strangely, this dynamic musical period had its origin as a scholarly research project. During the Great Depression, a New Deal program called the Works Progress Administration hired unemployed folklorists and sent them into the boonies to make field recordings of traditional music. The folklorists came back with recordings of musical styles most urban people had never heard before— gospel, blues, labor songs, banjo picking and suchlike.

A new generation of musicians was so amazed by the raw authenticity of what they heard that they didn’t want to just listen, they wanted to play and sing like that themselves. The music especially touched a nerve for middle-class white kids, maybe because their upbringing provided no adequate substitute for the expressive power of home-grown music. Out in the larger world singers like Peter, Paul & Mary, Bob Dylan, and Joan Baez were making a name for themselves, but as so often seems to happen, Utah was along for the ride. Traveling in a parallel universe.

One thing that made Utah different was the rich local folk music tradition. Mormon converts from across Europe and America had melded their musical styles, and folklorists from BYU, the University of Utah and Utah State University had made extensive collections of Utah folk music that were similar to the WPA folklife projects, but not part of them. That meant that in Utah, folk-revival musicians had access to completely unique material. Folklorist Hal Cannon (founder of the Western Folklife Center in Elko, Nevada) recalls sluffing classes when he was a student at the University of Utah to go to the library archives and listen to songs collected in the 1940s by professor Lester Hubbard. Cannon fell in love with what he heard and wanted the music to live again. He taught himself to play the songs, and they became part of  the repertoire of the Deseret String Band (which many years later represented Utah at the close of the Winter Olympics in Nagano, Japan).

The 1960s folk music scene in Utah crystallized around two exceptionally bright and shining stars (who happened also to have been a teenaged Hal Cannon’s guitar teachers ). One was Bruce “U. Utah” Phillips, an anarchist, pacifist veteran, labor activist, Peace and Freedom Party candidate and master of the shaggy dog story (the Moose Turd Pie joke will haunt him to his grave). The other was Rosalie Sorrels who is the woman in the lyrics of the Nanci Griffith song “Ford Econoline”: “She’s the salt of the earth/ Straight from the bosom of the Mormon church/ With a voice like wine/ Cruising along in that Ford Econoline.” In a 2003 National Public Radio interview, Sorrels described her music as “a way to take sorrow and turn it into a thing you can hold in your hand and throw away.”

Fast forward to the present and it turns out that both Utah Phillips and Rosalie Sorrels got famous. Not really rock-star famous, but sort of underground famous—the type of famous where lots of really, really well-known performers play their music and talk about them on stage but people who aren’t from Utah aren’t quite hip enough to catch the reference. Famous like when bluegrass legends Lester Flatt and Earl Scruggs sang “You’re Gonna Miss Me When I’m Gone” and it turns out that’s a Utah Phillips song.

Nonetheless, in 2004 when folklorist Dave Stanley edited a history and resource guide called “Folklore in Utah,” the book hardly even mentioned Utah’s golden age of folk music. Polly Stewart, an English professor about to retire and move back home to Salt Lake City, realized that unless someone did the research the whole era would die with the memories of people who were there, and she decided to write the history herself. An article she wrote for the Summer 2006 issue of “Utah Historical Quarterly” describes the period of 1959-1966 as “a concentration of sociopolitical and artistic energy of a sort never before felt in Utah,” and she knows what she’s talking about because back then she was the “Polly” who played authoharp with “Polly and the Valley Boys,” one of Utah Phillips’ bands. Polly also grew up as a neighbor to Rosalie Sorrels, and when she was a student at the University of Utah she remembers walking past the Sorrels’ house in the Avenues and sometimes Rosalie would tap on the window to invite her in for a cup of coffee.

So that’s the other remarkable thing about Utah’s golden age of folk music: it was extremely personal. When you went to the concerts (which I did, because my parents took me when I was a little kid), you sat right next to the performers and afterwords got to hang around and chat with them.

Imagine it’s the 1960s and you are an anti-war, left-leaning, socially idealistic college student. You sign up for guitar lessons. Your teacher (who is going to be a famous performer one day, only you don’t know it because she just seems to be your friendly next-door neighbor) is passionate about social justice and currently in the throes of inspiration, discovering the music that’s going to define her life’s work. Imagine that she’s undergoing this transformation in your living room and on your front porch and in your favorite coffee shop hangout. How could this be anything other than the best of times?

And that’s why when Polly the scholar went to interview her old friend Bruce Phillips (by now 70 years old and not in the best health), he got all excited and said it was time to do a reunion concert. What could she do but graciously accept the honor of being the producer (and curse under her breath at the 18 months of solid work it took to pull it all together even with help from the Utah Arts Council Folk Arts Program and many others).

And what if you never listened to enough folk music to feel nostalgic for it? Well, Rosalie Sorrels says that one of the nicest compliments she ever received was from a critic who said that her music brought back memories he never even had.

Urban Pioneers: A Concert of the 1960s Folk Music Revival in Utah