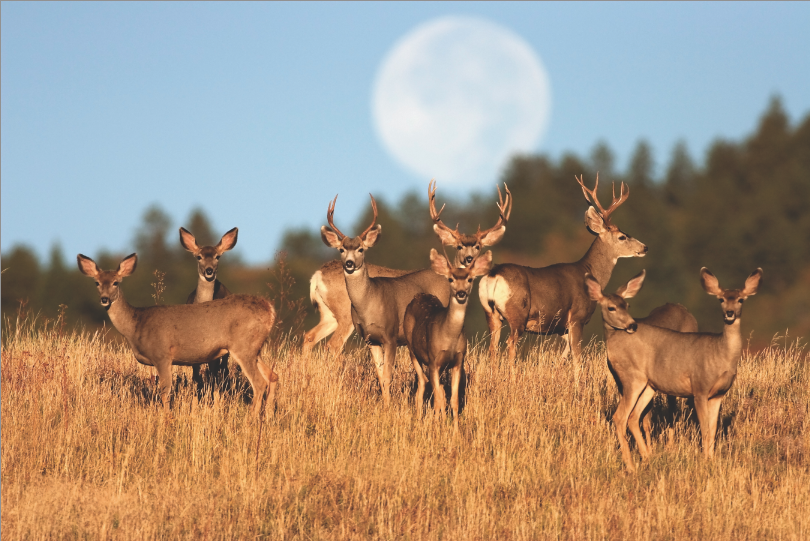 A monthly compendium of random wisdom for the home, garden & natural world
by Diane Olson, Anna Zumwalt and Greta deJong

July 3 The dog days of summer begin (through August 11), historically named after Sirius, associated with mad dogs and bad luck. Nowadays it refers to the hottest part of the year in the northern hemisphere. We are now halfway through the year.

July 4 Independence Day. Thomas Jefferson drafted the Declaration of Independence on a “laptop,” a kind of writing desk that could fit on one’s lap.

July 6 Want to try planting by the moon? Plant your late crop of above-ground veggies before July 9.

July 9 The larkspur, July’s signifying flower, grows like a weed throughout northern Utah. The drought-tolerant self-seeding annual is tall and attractive, though toxic to horses and cattle.

July 10 Just like humans, goats, bats and whales are known to adjust their vocal sound in response to a social environment. In other words, they can learn accents.

July 11 Conserve moisture, suppress weeds, protect your soil. Mulch your garden! Easy option: the compost accumulating in your pile or bin. Or buy a bale of straw from IFA for a few bucks. (Or hay—more nutritious for your soil, and/but it will turn a lovely green as the alfalfa seeds sprout.) Or bags of mulch from any garden store (look for organic).

July 12 About a third of landfill space is taken up with yard and kitchen waste. Start (or take care of) a compost pile: www.compostguide.com

July 13 Americans eat an average 20 quarts of ice cream a year. Vanilla is the most popular flavor, with chocolate coming in a distant second.

July 14 Culinary legend has it that the Caesar salad was invented in Mexico in July of 1924. It’s a great summer salad that classicaly contains raw eggs and anchovies. Only one in 20,000 eggs may carry Salmonella, not a fatal affliction. But you can assure safety by pasturizing: Carefully submerge eggs into 140º water. Remove after three minutes. Cool before using. They keep in fridge 6-8 weeks.

July 16 Looking for a drought-tolerant, cold-tolerant fast-growing rose bush? Consider Meidiland roses. We have two that are 20 years old. While the tiny, abundant blooms are not big on fragrance, they flower six to eight months of the year and require only deadheading.

July 17 If you can see your footprints in your lawn, it needs more water.

July 19 Hang an overripe banana from the stem of tomato plants to encourage ripening. It’ll also distract slugs and snails, attract butterflies and mystify your friends and neighbors.

July 20 Bug zappers are useless against mosquitoes. The devices attract and kill beneficial or harmless insects, like moths, and have no effect on the overall mosquito population. Bats and purple martins, once thought to be big mosquito eaters, are equally ineffective. What does work: gambusia fish in a pond; dragonflies; and mosquito traps (the Mega-Catch brand was used successfully in a large study). As for repellents: Recently the NIH reported that lemon-eucalyptus oil could be as effective as DEET. Wear light-colored clothing and avoid scents.

July 21 A hammock suspension system ($15-35) makes your hammock more useful by enabling you to hang it easily in a lot more places—on the porch, in the park or take it camping.

July 23 New Moon @ 3:45 am. What new thing could you start today? Set an intention, initiate a relationship. Start fresh.

July 24 On this date in 2001, Denver’s 10th Circuit Court declared Utah’s liquor laws unconstitutional. Beer signs were finally allowed in bar windows (instead of just “Cold Ones”). Restaurant servers could ask, for the first time, “Would you like to see a drink menu?” and bottles came out from hiding for all to see. CATALYST (along with Junior’s Tavern) was a plaintif in that case.

July 27 Float citrus peels in bird baths and other water features to discourage mosquitos from laying their eggs in there.

July 28 Cover crops, such as oats and clover, planted now beneath and between veggies, will retain moisture, staunch weeds and feed the soil, and can be left in place until next spring. Find them at Mountain Valley Seed Co.

July 29 Each year about 150
Americans contract leprosy, the same skin-disease that is mentioned in the Bible. In the United States,
the source of leprosy is usually
armadillos.

July 30 Meteor shower (Delta Aquarid): Look to the south at predawn for best viewing. Expect to see 10 per hour.

July 31 Summer is the time when one sheds one’s tensions with one’s clothes, and the right kind of day is jeweled balm for the battered spirit. A few of those days and you can become drunk with the belief that all’s right with the world.
—Ada Louise Huxtable