Of nations and friends. 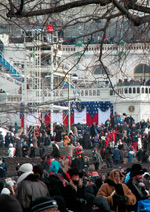 The first inaugural address of Mr. Lincoln of Illinois was made to a nation in near-imminent peril. Speaking from the steps of the Capitol building on that March day, Lincoln’s voice was-as often reported -high, ringing and shrill. One might imagine a few birds circling the crowd and singing in the spring air, the voice of the new President rising over theirs, sharing their pitch.

We are not enemies, but friends. We must not be enemies. Though passion may have strained, it must not break our bonds of affection. The mystic chords of memory, stretching from every battle-field, and patriot grave, to every living heart and hearth-stone, all over this broad land, will yet swell the chorus of the Union, when again touched, as surely they will be, by the better angels of our nature.
-Abraham Lincoln, March 4th, 1861 Inaugural Address

The first inaugural address of Mr. Lincoln of Illinois was made to a nation in near-imminent peril.

Speaking from the steps of the Capitol building on that March day, Lincoln’s voice was-as often reported -high, ringing and shrill. One might imagine a few birds circling the crowd and singing in the spring air, the voice of the new President rising over theirs, sharing their pitch.

From that same portico, in the 233rd year of our republic, citizens again stood and watched another inauguration: this one of the 44th President. I was there, too, standing in a crowd of over a million, squinting to see what I could see in the bright sunlight.

Watching Mr. Obama take the oath, one could not hear birds as one might have in March of 1861 and the voice heard by the citizens of the world was deep, loud and confident. All around, people held their loved ones and they did the most simple and obvious of things when one doesn’t know how to put into words what they feel. They wept.

Old women from Alabama hugged strangers. Shy white men from the Midwest accepted those hugs without reservation, not for a moment finding it unnatural.

I want to speak about that day as “witnessing history,” but would one say that about their own wedding or the birth of their child?

From events like those, and this one, one only gets a few impression to carry with them for life: the trembling of even an atheist when the cannons fire after the words “So help me God;” the great roar of outrage, relief and success that rise up from the crowd when the new ex-President lifts off and flies over the Mall; seeing, at the ceremony’s end, 12-year-old girls dancing in a sort of political conga line, waving flags and laughing.

Those who were there and perhaps those all around the world were enjoined together-if even for a moment-as countrymen.

That’s the idea-that all people might be countrymen-that President Obama spoke to. It’s what I heard and what I saw when standing under the sun of Washington bracing against a cold wind.

In 1861 it was of the utmost importance to preserve the Union, and Lincoln worked hard on its behalf. In 2009, we know a different type of Union: tiny unions spread all across this land. They’re out there-hundreds of smaller groups from which the larger is composed-made up of dancing girls and blushing Midwesterners.

I was on the Mall. To be alive and to witness the moment of the inauguration on that day was to be a part of a renewing of these old unions-exquisite relationships which, I hope, with some good luck and plenty of hard work will endure and even flourish for generations to come.

Michael Place is a founder of Utah Free Media (Utah FM.org) and the host of “Make It New,” 3-6 p.m. Mondays.