Thanks for your efforts to radicalize the environmental movement.

On March 2nd, I visited your office in Washington, DC with about 35 other Utah students. Like the rest of the 12,000 students from around the country who came to attend Power Shift ’09, the largest youth conference on climate change in our nation’s history, we were there to talk with our leaders about taking serious action to stop climate change.

Your legislative director Chris Campbell made it absolutely clear that you would have no part in ensuring a livable future for our generation. He said that you’ve looked extensively at the science on both sides of the climate issue, and that you chose to side with the 3% of scientists who don’t see it as a problem. When asked how you ethically deal with the risk that perhaps the other 97% are right and your inaction threatens all future generations, Chris dutifully changed the subject. 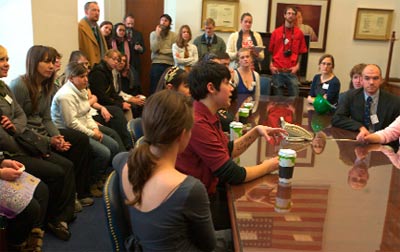 As all those scientists you chose not to listen to have probably told you, the climate crisis is extremely urgent and unthinkably serious. The chairman of the Intergovernmental Panel on Climate Change said that what we do in the next two or three years will determine whether we succeed or fail to defend our civilization. That was 15 months ago, and we’ve done nothing. That means we need truly revolutionary change fast.

So, thankfully, your imperviousness to reason is encouraging us to use more revolutionary tactics. In fact, the only folks doing more to encourage moderate environmentalists to become more hardnosed might be the Utah State Legislature.

The House decided that if citizens want to exercise their rights to petition the government for an environmental reason, they must first pony up a cash bond in the amount of whatever the polluter/pillager in question stands to lose. In other words, people on the “we-want-a-healthy-world-for-our-children” side of the issue have to pay in order to participate in the democratic process. This unconstitutional gem might even top you, Mr. Hatch. [The Senate never brought the bill to a vote, likely because it was expected Gov. Huntsman would veto it.]

You and the State Legislature have been so effective at radicalizing environmentalists that we actually had to start a new group, called Peaceful Uprising, to harness all that activist energy. We are now training, supporting and defending all those whom you have motivated to nonviolent direct action. It’s almost like we’re partners. You keep rejecting those who play by the rules, and we’ll keep finding a place for them in the streets. Thanks for your help, pardner.

Tim deChristopher is a student at the University of Utah and an environmental activist.