A toast to the life of Brian.
—by Greta Belanger deJong and John deJong

Coming back to “alternate reality” after a week or two of vacation in the Black Rock desert in northwest Nevada is a shock to the system. Some­times world events intensify the discordance. Our first visit to Black Rock City, in 2001, was followed by 9/11. In 2005, it was Katrina. This year, traversing the last leg, bleary from 36 hours of packing, driving and catching cat naps in the passenger’s seat, we heard the news that our friend, lawyer and advocate Brian Barnard had died in his sleep that weekend. He was 67.

Maybe you didn’t know Brian Barnard, but if you live in pursuit of life, liberty and happiness in the state of Utah, you regularly reap the benefit of his good works. 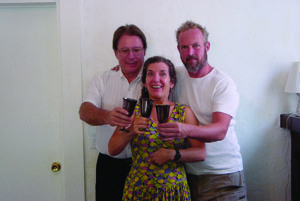 Brian Barnard, Greta deJong and John deJong toasting our DABC victory in 2001 after years in the courts.

A Who’s Who of rabble-rousers attended his wake, where a bottle of MacAllan’s scotch and a small table of plastic shot glasses sat next to the coffin; it was a reunion of friends, neighbors, clients, and colleagues and interns who’d worked at his Utah Legal Clinic through the years. Many shared tales of Brian’s wit, eccentricities and generosity. He supported the arts, showed up at birthday parties, lawyered for free for his friends, shared his abundant garden harvest, and looked humble even though he knew he was usually smarter than anyone else in the room.

The quintessential American, he was our state’s champion of the Bill of Rights (and in fact wrote a series on it for this magazine in the ’90s), challenging the unconstitutional laws that our legislature inevitably passed and our governors just as inevitably signed. His legal prowess has been highlighted in every local news source since his death. He filed a suit on our behalf and that of Junior’s tavern and two other entities, against the DABC when we ran into complications regarding the mention of “spirits” when we began the CATALYST Dining Guide section. After Judge Sam, locally, held up the case for years, Brian appealed to the Tenth Circuit court in Denver. The decision in our favor came down on July 24, 2001. That day, for the first time, restaurant servers could abandon the euphemistic “Would you like a beverage?” and hand you a wine menu. The spirits came out of the closet and onto the back bar. The old “cold ones” window signs came down in exchange for something more direct. These changes, lauded as making Utah a more civilized place, have often been attributed to the upcoming Olympics. But that was not the case. It was Brian, all Brian. It wasn’t just about booze. It was about other people deciding what you can and can’t do; it was about some pretty basic freedoms.

These efforts won him and CATALYST magazine the Freedom of Information Award from the Society of Professional Journalists the next year.

His representation of the Navajo Indian Tribe got them the royalties from mining on tribal lands that were rightfully theirs. He defended students protesting Apartheid, animal rights activists, and many other controversial cases pertaining to first amendment rights. He stood for something, and he did it calmly and cheerfully.

We raise our glasses to you, Brian Barnard.