Travesty Mountain and the Colossus at Lehi

Throughout the State of Utah, monuments from Temple Square to Delicate Arch remind us of Utah’s grandeur and dominion. Now, thanks to a fruitful collaboration between Traverse Mountain Outlets and the Yesco Sign Com­pany, we have one more icon to celebrate. Standing over 100 feet tall and signaling the entrance to (brace yourself) Utah County’s first outlet mall, is a sign so large, it dwarfs even the Colossus at Rhodes. Literally: by two feet.

The Colossus at Rhodes was a figurative statue made of bronze and marble that commemorated the victory of Rhodes over a Cypriot attack. Standing 98 feet above the city’s port, it functioned as protectorate to the small costal community below. The sign at Lehi stands guard over another empire entirely: a commercial emporium of 45 outlet shops that promise unprecedented savings and “shopping extravaganzas.” Appropriately, the sign was sufficiently newsworthy to warrant its own press release, which a local news source (KSL) graciously accommodated. 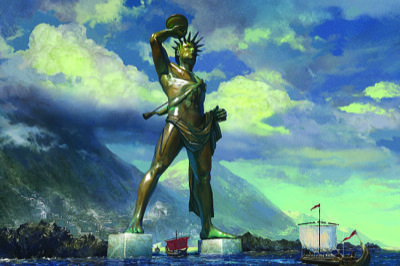 The Colossus at Rhodes featured a giant “colossal” statue of Helios, the Greek god of the sun. It is Helios that drove a chariot of the sun across the sky each day. Similarly, the sign at Lehi contains 1.7 million LED bulbs, and emits enough light to rival the sun itself and illuminate the surrounding area. This includes the award-winning Adobe building, designed by WRNS Architects. In contrast to the Traverse Mountain eyesore, the Adobe building exhibits some of the most sophisticated and elegant architecture in the region and demonstrates exactly how to build in harmony with nature. Also in the sign’s shadow (what isn’t?) are thousands of family homes forced (by building codes) to endure some of the most understated paint jobs imaginable, lest their palettes appear too garish against the nearby hills.

According to the ancient Greeks, the Colossus of Rhodes was one of the Seven Wonders of the Ancient World. According to the KSL press release, the sign at Lehi is the largest sign in the country. Surely the size alone makes it a monument that rivals even Delicate Arch or Temple Square. As such, shouldn’t we ask what, if anything, this object commemorates, besides the 45 outlet shops hovering in its wake?

The only possible answer, the one found precisely in its name, is Traverse Mountain itself. For, near where the signs stands is a large, gaping wound which once was a mountain. Gradually excavated and killed by another Utah titan, Geneva Rock, the area is now reduced and diminished. This fact adds insult to injury, and transforms the sign into an enormous gravestone, marking the slow and gradual death of the only true colossus: Traverse Mountain—the geological formation. As such, the LED window of the sign would more appropriately read:

Like other Utah landmarks such as the Kennecott Copper Mine or the Spiral Jetty, the sign at Lehi can probably also be seen from space. In fact, the Mars Rover may have already detected it. As the country’s biggest, tallest, brightest and most bombastic sign, it heralds the triumphal message from on high: “Run, Don’t Walk to the Glorious State of Utah!! Where We Have Built the New Jerusalem!! Home of the Largest LED Sign in the United States!! And Utah County’s First Outlet Mall!!” As for any other local attractions in the area, such as the natural scenery or architecture? Well, maybe someone will think to make a billboard for that. 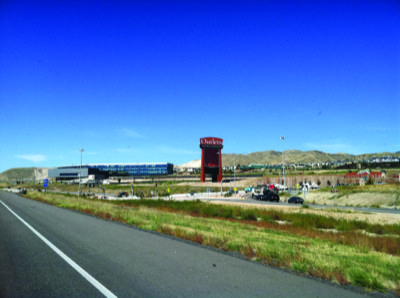