The Way of St. James: A pilgrim's tale. Writer Marlene Lambert travels the historical pilgrimage trails of Western Europe, and finds exactly what she was looking for, and more.
by Marlene Lambert 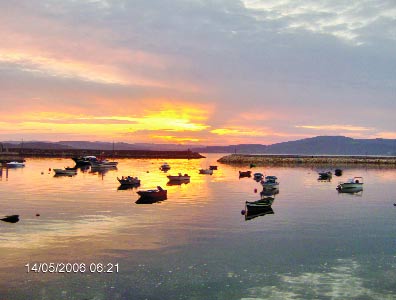 Three years ago, when the divorce was final, I had a ceremony with several of my divorced friends, inviting them to witness my renewed commitment to my Self. This trip to Europe was to be the honeymoon, consummating my budding relationship to my Self first and foremost, for better or worse, in sickness and in health.

Notre Dame du Puy-en-Velay stands high on the Massif Central of France, gracefully resisting the late February ice, snow, wind and rain. I began my walking journey of a thousand miles inside this giant statue of the Virgin Mary. I emerged from her red iron robes, descending eastward under cloudy skies that threatened snow. As I looked back, she resembled Lady Liberty, holding a child instead of a book and torch, and dressed in warm red, not cold blue. I then passed through the town's cathedral and its traditional starting point for pilgrims, the statue of Saint James the Apostle. I had begun to walk the pilgrimage of Le Chemin de Saint Jacques, or El Camino de Santiago, "The Way of Saint James."

The Way of Saint James follows a series of historic Christian pilgrimage routes that converge at Santiago de Compostella in northwestern Spain, alleged site of the great apostle's burial. For my way, I chose an established route that took me more than 740 kilometers (450 miles) across central France, and 900 more kilometers (550 miles) in northern Spain, beyond Santiago all the way to the sea. I walked alone for 36 of the first 40 days, averaging about 20 kilometers (12 miles) a day, and other than the pain that gradually developed in my feet (which, I am told, is normal), my whole body felt healthier than ever before. I was a well-oiled eating and walking machine.

In the latter days of the walk, {quotes align=right}I began to feel something of the bliss that Dorothy Gale must have felt when she realized she was over the rainbow – a tremendous sense of peace, a sense that everything was right with the world, including with me. {/quotes}

I expected to arrive at the traditional end of the pilgrimage in Santiago de Compostella, Galicia, Spain, on May 8th. I expected my period to start on the same day. It had been running like clockwork since I left the States four months earlier. It seemed appropriate to begin bleeding as I arrived-an ending and a beginning. But I got to Santiago, and it didn't start. Neither did I feel my journey had ended. I had the urge to keep walking and hit the trail again later that day.

I sobbed when I first glimpsed the North Atlantic Ocean from the hills of western Galicia three days later. For the past 80 days and about 1,000 miles, I had wondered what this moment would be like. In France, the catch phrase of pilgrims was "on ne sait jamais," in Spain, "quien sabes"- one never knows. The next morning, I reached Finisterre, "the end of the earth." This small coastal town considers itself the true end point of The Way.

As I approached the lighthouse on the cape I met up with a fellow pilgrim named Martin, a young German who I had first met weeks earlier. He arrived a day before me and had climbed down the steep wall of rocks into the water to get a sense of completion at the end of his pilgrimage. He asked what I planned to do when I got to the farthest point. I said I didn't know, that I would see what came up in the moment. Many pilgrims burn their hiking boots or create other symbolic gestures of their journey's end.

Within a few minutes, I was climbing down the rocks behind the lighthouse as far as I felt safe. (Not as far as Martin did, I assure you.) The boulders wobbled beneath me as I sat on a small ledge and reverently opened the bundle of mementos I had carried with me from home: medallions from and for friends and family, mostly. I had already released some of my burden, as many pilgrims do, at the foot of the Cruz de Ferro in the Margarateria region, including a small blue marble and a tiny black fetish of a raven. Now I allowed the small silk bag that had contained them to blow away. Within a moment of releasing it, lo and behold, I started to bleed! Ah, the wisdom of the body. The moon was full that night. No other celebration was needed.

As a bit of a victory lap, I chose to walk another 35 kilometers (21 miles) to the small fishing village of Muxia. I still faced the usual daily challenges of The Way, including feeling lost a couple of times (and being lost at least once), thinking about important things like lodging, food, the weather, and the condition of my feet almost always. Like Santiago and Finisterre, Muxia also claims to be the true end point for pilgrims, since its coastline has sprouted the chapel of Nuestra Dama de la Barca, or "Our Lady of the Ship." Saint James's followers are said to have landed there in a stone boat with the relics of their beloved teacher, having safely sailed away from their persecutors in Jerusalem. My safe arrival there was accompanied by the strongest sense of completion I have ever felt.

I did it… "My Way." Sing it, Frankie. "Le Chemin" or "El Camino" means "The Way." Shirley MacLaine and Paolo Coelho wrote nice stories about it, but it wasn't that way for me. I did, in fact, get bitten by a dog while on the pilgrimage. Another day, I became violently ill. I also had countless-almost daily-positive serendipitous encounters, but I did not experience the kinds of phantasms they described. "The Way" is different for everyone, which is to say, there is only one way-the way I choose.

I did something, just for me, for no other person and for no other reason than for my own delight. I finished something in a way I felt good about, 100%. Maybe I even felt proud of myself for a moment. I don't think I had ever really felt that before. All my prior achievements were done to please others or with compromise to others or were interrupted by others' needs. In all my years of academic and professional success, no one ever truly praised my achievements. {quotes}Now that I had done something just for me, for no good reason, friends and family all over the world were suddenly interested and vicariously thrilled!{/quotes}

Whatever it was I had done, here at Muxia I felt finished. Complete. Done. I did not have the urge, let alone the capacity, to walk another step. I finally felt very, very tired.

I spent the next several days lying around doing nothing. Literally. Every time I tried to do anything,

I found myself lying back for another nap.

At some point along The Way I was startled to realize that finding a full-time partner is no longer a priority for me. A preference, maybe. Maybe not. But something along The Way radically shifted, though it was subtle. When I left the U. S., I still felt I needed to fill the void created when my husband left. Now I felt for the first time that it not only would be fine to live alone, it would also be OK to die alone. That was a real shocker. I would of course prefer not to die alone, but along with the blue marble and the obsidian raven beneath that wayside cross, I seem to have laid down the burden of needing someone else to be in my life full-time.

Because I was incommunicado for several months, my friend Roz was certain I had fallen in love and would not return to Salt Lake City. It was in a way true; I fell in love daily, with the trees and flowers and sheep and cows and other pilgrims that I met along The Way. My sense of compassion, of truly "suffering with," grew exponentially every step of The Way. But mostly, each day I fell more in love with me, and the person who left on this journey is surely not the person who returned.

The lessons of The Way are still integrating and unfolding in my daily life back here in Utah. I keep finding more ways to simplify my lifestyle, to walk more and drive less. I keep finding more things around the house to donate to local charity collections, and I keep finding more reasons to be grateful for all that I have. And, I keep finding new ways to offer compassion to my Self and others. Although my long walk has come to an end, my journey continues.

Marlénè Lambert, M.S., is an adjunct faculty member in the School of Nursing and Health Sciences at Westminster College in Salt Lake City. She teaches yoga and other moving meditations, even though her feet still hurt. Contact her at mlambert@westminstercollege.edu.