Too Big to Fail

In nature, nothing is too big to fail. But “failure” is also the beginning of somthing new. Chip Ward explores ways in which ecological ignorance and economic collapse are intimately connected—and how healing our separation from nature just may be what saves the day. 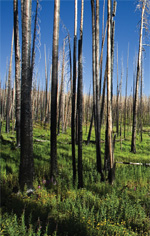 “Too big to fail.” It’s been the mantra of our economic meltdown. Although meant to emphasize the overwhelming importance of this bank or that corporation, the phrase also unwittingly expresses a shared delusion that may be at the root of our current crises -both economic and ecological.

“Too big to fail.” It’s been the mantra of our economic meltdown. Although meant to emphasize the overwhelming importance of this bank or that corporation, the phrase also unwittingly expresses a shared delusion that may be at the root of our current crises -both economic and ecological.

In nature, nothing is too big to fail. In fact, big is bound to fail. To understand why that’s so means stepping away from a prevailing set of beliefs that holds us in its sway, especially the deep conviction that we operate apart from nature’s limits and rules.

Here’s the heart of the matter: We are ecologically illiterate-not just unfamiliar with the necessary scientific vocabulary and concepts, but spectacularly, catastrophically, tragically dumb. Oh yes, some of us now understand that draining those wetlands, clear-cutting the rainforests and pumping all that CO2 into the atmosphere are self-destructively idiotic behaviors. But when it comes down to how nature itself behaves, we remain remarkably clueless.

The adaptive cycle from Google to GM

Science tells us that complex adaptive systems, like economies or ecosystems, tend to go through basic phases, however varied they may be. In the adaptive cycle, first comes a growth phase characterized by open opportunity. The system is weaving itself together and so there are all sorts of niches to be filled, paths to take, partnerships to be made, all involving seemingly endless possibilities and potential. Think of Google.

As niches are filled and the system sorts out, establishing strong interdependent relationships, the various players become less diverse and are bound together in ways that are ever more constricting. This is the consolidation phase that follows growth. As the system matures, it may look ever bigger and more indestructible, but it is actually growing ever more vulnerable. Think of General Motors.

The hidden weakness that underlies big systems is inherent in the consolidation phase. When every player gets woven ever more tightly into every other, a seemingly small change in a remote corner of the system can cascade catastrophically through the whole of it. Think of a lighted match at the edge of a dry forest. Think of Bear Stearns.

As global capitalism is melting down around us, we are experiencing just how, in an overly mature system, disruptions that start small can grow exponentially. So, for example, unemployment goes up another percent or two, just enough to make those of us with jobs save our cash, fearing we might be next. As we buy less, stocks pile up, production lags, more people are fired, more fear spreads, and consumption contracts further.

The above scenario, as familiar as can be, also provides an example of how easy it is to cross thresholds-even just that slim percent or two can do the trick-and fall into self-reinforcing feedback loops. Big consolidated systems are particularly vulnerable to such runaway scenarios. Think of the domino effect within the densely connected global economy that led to Bear Stearns, then Lehman, Merrill Lynch, AIG…

The third phase in the typical adaptive cycle is collapse. If you want to know what that’s like, turn on the TV, look out your window, or knock on your neighbor’s door, assuming that you still have a window or your neighbor still has a door. Since everything’s connected, when an overgrown system spirals out of control, collapse tends to feel like an avalanche rather than erosion.

It may be hard to notice during the turmoil and confusion, but enormous amounts of energy are released in the collapse phase of an adaptive cycle and that leads to the final phase: regeneration. After seeds are cracked open by a forest fire, seedlings bloom in the nutrient-rich ashes of the former forest. They soak up newly available sunlight where the forest canopy has been opened. Then, as those open spaces start to fill, the growth phase begins anew. Hopefully, in our world, those empty auto-making factories will soon house a blooming business in wind turbines and mass transit.

It is important, however, to recognize that sometimes the collapse phase leads to renewal and sometimes to an entirely different and unwanted regime. Fire, for example, can renew a forest by clearing debris, opening niche space, and resetting the successional clock, or, if combined with a prolonged drought, it can set the stage for desertification. In human systems, we can influence whether the outcome is positive or negative by setting goals, providing incentives, and creating policies designed to reach them.

Building an economy in thin air

Once you tune in to the phases of an adaptive cycle, you see them unfolding all around you. They may seem overwhelmingly complex, especially when compared to the neater, more linear models that shape our conventional ways of seeing the world, but ignoring that cycle as you build an economy is akin to denying gravity as you build a skyscraper.

Bigness is a warning signal that tells us to take a second look and consider whether the seemingly solid thing in front of us is far closer to collapse than it looks and, if so, to ask what can be done about it. If we were ecologically savvy, the conventional wisdom would be: If it ain’t broke but it sure is big, then fix it. We do that by breaking it up and creating space for new niches and for the more dynamic diversity that naturally flows into such a system.

It’s easy to attribute the creative fervor of the growth phase to an absence of regulation, rather than seeing it as the natural process of niche-filling in a system with lots of available space. As is now plain, freeing an already big corporate system of almost all regulation so that it can grow even bigger does not, in fact, encourage creativity; it just hastens the consolidation phase. So, to offer but one example, letting GM off the hook on fuel efficiency during the Bush era didn’t make the company more creative. It only added to its long-term vulnerability.

It was surely no coincidence that, after the mammoth AT&T monopoly was broken up in the 1980s, cell phone technology emerged explosively starting in the 1990s. In a sense, cell phones were the technological equivalent of a new species emerging after the collapse and regeneration phases of an ecosystem. In the same way, it wasn’t giant IBM which generated the revolutionary development of person­al computers and the Internet. The next breakthrough in solar technology may be more likely to start in your neighbor’s garage than in Chevron’s lab.

Our ignorance of the adaptive cycle is just one example of our ecological illiteracy. We are similarly inept at reading all sorts of natural signs. Take, for example, thresholds, those critical points where seemingly minor changes can tip an economy into recession or a climate into a new regime of monster storms and epic droughts.

Thresholds are like the doors between the phases in the adaptive cycle, except that they are often one-way-once you stumble through them, you can’t get back to the other side-so it is crucial to understand where they are. Although we recognize that there are such things as “tipping points” and, belatedly, that we have already crossed too many of them, we’re lousy at seeing, let alone avoiding, thresholds before we reach them.

Understanding exactly where a threshold is located may be difficult, but we can at least look for such boundaries, and deliberately try not to cross them when the unintended consequences of doing so can be dire. There are, after all, usually warnings: The reservoir level is lower every year; the colors in the coral reef are fading away; mercury levels in the lake increase; you are more dependent than ever on imported oil….

Once you have driven off a cliff, it does you little good to realize that you are falling. The time to practice water conservation is before your well runs dry. Our culture’s ability to deal with thresholds has proven only slightly better than my dog’s ability to solve algebra problems.

Still, if we really were attentive to the natural cycles unfolding around us, we wouldn’t be attracted to growth like moths to a flame. We wouldn’t equate bigness with success, but with risk, with enervation awaiting collapse. We certainly wouldn’t be aiming today to rebuild yesterday’s busted economy so that, tomorrow, we can resume our unlimited looting of nature’s storehouse.

Believing that we are unbounded by nature’s limits or rules, we built an economy where faster, cheaper, bigger, and more added up to the winning hand. Then-until the recent global meltdown, at least-we acted as if our eventual triumph over anything from resource scarcity to those melting icebergs was a foregone conclusion. Facing problems (or thresholds) where the red lights were visibly blinking, we simply told ourselves we’d figure out how to tweak the engineering a bit, and make room for a few more passengers.

We got it wrong. A capitalist economy based on constant, unlimited growth is a reckless fantasy because ecosystems are not limitless-there are just so many pollinators, so many aquifers, so much fertile soil. In nature, unchecked rapid growth is the ideology of the invasive species and the cancer cell. Growth as an end in itself is ultimately self-destructive. A (globally warming) rising sea may lift all boats, as capitalists like to point out, but it may also inundate the coastline and drown the people living there.

If “recovery” from economic meltdown is just another word for a return to business as usual, we will be squandering a crucial chance to begin to build an economy that could be viable over the long run, without overloading the Earth’s carrying capacity and courting catastrophe. We don’t have to go big.

Remember that regeneration phase of the adaptive cycle? Here’s where that comes in. Yes, collapse is a nightmare, but it also presents opportunities. If we were more aware of the thresholds we’ve already crossed, we might think differently about the next iteration of the economy. We could always cross a threshold of our own making and decide to live differently. Unrestrained growth, after all, was never a prerequisite for health, happiness, and justice. It’s not written into the Constitution.

What would an end to separation from nature and from each other feel like? How might it be expressed day to day? The regeneration phase that is now upon us begs us to answer those questions.

This much is clear: If we want to avoid endless darkness and hardship, we have to become ecologically literate-deeply so. The future is, you might say, too big to fail.

Chip Ward, former assistant director of the Salt Lake City Public Library, is a political activist and author of “Canaries on the Rim” (Verso) and “Hope’s Horizon” (Island Press). He writes from Torrey, Utah, a ºvillage that refuses to go big.