Introduction: The Backyard Birds of Ben Bombard and Katherine Pioli

In the first week of March, after months of deliberation, my boyfriend Ben and I sat down, got online and ordered two breeding pairs of Cayuga ducks and two pairs of American Buff geese. Picking our breeds was more difficult that choosing between gelato flavors at an Italian ice cream parlor: Nothing looked half bad.

The American Livestock Breed Conservancy, easily the best online source for information on rare breeds of animals from bovine to hens, listed dozens of beautiful fowl, such as the Silver Appleyard duck, Welsh Harlequin duck, Pomeranian and Cotton Patch geese. Already proud owners of four laying hens—a homely but sweet red sex-link, a spunky black sex-link, a temperamental Barred Rock and a beautiful hand-me-down Rhode Island Red—we knew a little about backyard chickens, but nothing about other barnyard fowl. Our research told us that Cayuga and American Buffs were breeds indigenous to North America—a rarity among waterfowl, which seem to mostly come from England—and relatively clean, docile and naturally good parents. We were sold.

While there must be dozens of reasons to start a backyard flock; ours started with a wish for better food. In the weeks leading up to Thanksgiving last year, I naively began calling around to any and all local farms and ranches I could find that sold turkeys. From Murray to Evanston, everybody was sold out of Thanksgiving birds, and had been for six months! Logically, for us at least, this led to looking at raising our own birds for the following year. Why pay someone else for food when you can raise it yourself, connect to traditional food ways, invent some of your own in the process and learn lots along the way? 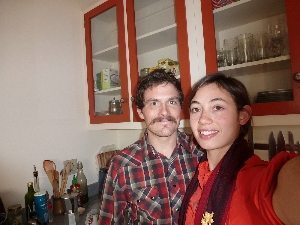 The day after Thanksgiving, we pulled from our bookshelf Self Sufficiency for the 21st Century by Dick and James Strawbridge, a British father and son DIY homesteading team. (Thanks are due to CATALYST’s Managing Editor Pax Rasmussen for gifting us the book and enabling this wild goose and duck chase!) Flipping to the section in the book on turkeys we read, “Keep separate from chickens to guard against the fatal blackhead disease.” According to the Jameses, more often than not, blackhead disease equals a dead turkey. Yeah, we could have done more research, but with our four egg-producing “ladies” out back, our turkey dreams were quashed. But not our hopes for increasing and diversifying our flock.

Having birds was less a hypothetical question for us than a necessary recipe for sanity in our lives. We relocated to our hometown of Salt Lake in September last year after putting down too temporary roots in Wyoming, where we cultivated peace through a connection to rural life and took in our first three hens in the last days before a particularly harsh winter. Back in Salt Lake, fate dealt us a house in the city ideal for urban homesteading. It came with ample garden space, apple, pear, black walnut and apricot trees, grape vines, and a south-facing greenhouse off the kitchen. Our landlords, long-time family friends, loved and encouraged our idea of keeping a small urban farm.

My farming fever goes back to college when, as a nineteen-year-old on summer break, I spent three months farming in New Hampshire. Since then I’ve volunteered as a WWOOFer on farms in the States and across Italy. Ben grew up working with horses in Draper back when it was still farm country. When we met and moved in together he expanded my summer garden to include chickens. Our small-time experiment into animal husbandry sparked something in Ben. Soon he took up butchery, cutting up hogs, ducks and elk.

Ben says his dream of keeping goats, sheep and pigs is in large part genetic, but it’s also inspired by his late grandfather’s farm in what was once rural Massachusetts, where a stable of racing horses lay close by the rabbit hutches, a pack of beagles kept for breeding, a pigeon and a chicken coop, and a large garden overflowing with “cucs” and “zuchs.” Despite his insistent pleas, and in light of the City’s regulations restricting the keeping of livestock on land not zoned agricultural, we compromised with backyard birds.

When we read in the Self Sufficiency book that “geese are absolutely amazing to rear, hardy, tough, and self-reliant,” and that both ducks and geese are relatively uncomplicated, we decided to go for it.

We wouldn’t be taking on this challenge if it weren’t for a grant from Slow Food Utah. Slow Food began in 1986 in Italy with Carlo Petrini. He believed that partaking in food and drink should always be a ritual of enjoyment, but also a practice which defends and builds biodiversity in our food supply, spreads food appreciation and knowledge and connects producers with consumers. In two decades, the Slow Food mission spread around the world and to Utah, where members host food events, volunteer at local farms and teach after-school food classes for children at local public elementary schools.

Ben and I had already committed to raising backyard fowl, but when we learned of the Slow Food micro-grant we decided to alter our project and apply for assistance. Instead of just raising birds for food, we decided that we could keep some for food and others for breeding. The Slow Food philosophy guided our search towards rare native breeds and encouraged us to become a source of information for the community. Thus this blog will serve through the year at an informational forum for our community where we will share our experiences and probably a lot more lessons learned than we can imagine. Come next spring, look for our announcement for ducklings and goslings. In keeping with our grant application and our passion for helping cultivate self-sufficient and local food culture and production, we’ll be offering them for free to good homes.

In less than a week, our new birds should arrive all the way from Middle River, Minnesota. When they show up on the doorstep peeping through the walls of their cardboard box, the American Buffs will be little balls of yellow that will mature into the creamy apricot colored adults, and the Cayuga ducklings will be little soot babies, all black and fluffy, until they grow into their adult colors of iridescent green. We hope you’ll follow our birds with us through it all, from imprinting and rearing, to harvesting, breeding and hatching. We know we’ve got a lot to learn and we’d love to hear from you with advice and questions.

This article was originally published on April 11, 2012.