Taking a stand against Bush’s last stand.
by Sallie Dean Shatz
On Friday, December 19th, 200 citizens braved a snow storm to gather at the BLM offices at the Gateway in downtown Salt Lake City to protest the Bush administration’s last-ditch auctioning of BLM oil and gas leases for 146,000 acres in southern Utah to the oil business. Numerous organizations had banded together to take legal action (SUWA v. Allred) protesting the auctioning of pristine public lands, 60,000 acres of which had previously been proposed for wilderness designation. Many of the parcels are close to Arches and Can?yonlands National Parks, Dinosaur National Monument, Desolation Canyon, the Book Cliffs area and petroglyph-encrusted Nine Mile Canyon.

The rushed timeframe of the auction didn’t allow for environmental impact reports, consultation with neighboring National Parks and taking into consideration the impacts on nearby archeological sites, nor were all rights even confirmed (private homes were on some of the parcels). Nor were bidders at the auction confirmed to be bonded. 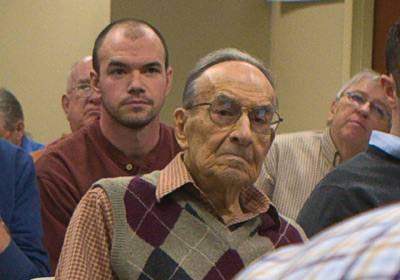 That Friday morning, Tim deChristopher, a 27-year-old student at the University of Utah, was taking his final exam. One exam question concerned the fairness of the BLM’s sale of oil and gas leases on public land if the only people in the room are from the oil industry. A thought-provoking question, especially considering what was happening in downtown Salt Lake City that very day.

After his exam, deChristopher headed to the protest. He had a vague intention of disrupting the sales, but didn’t know how. Walking into the BLM offices after the protest, he was asked if he was a bidder. A bidder? He looked like a college student after his last exam, unshaven, in a big down coat and a sports hat. Thinking it was the only way into the auction, he signed up. In the crowd of bidders he quickly realized an outburst would do no good.

What are the moments that define one’s life—those blindsiding experiences riddled with adrenaline and heightened awareness that change everything? Nothing will be the same after such a moment, the moment of choosing: Will you stand and have a voice? Will you walk through a door that is only open for an instant? What would push you forward or hold you back? What prepares you for these moments of truth unfettered by doubt, and can you see these moments as opportunities?

I was among the protesters that morning. Also in the crowd was Krista Bowers, the volunteer coordinator for the Salt Lake City Bicycle Collective and a volunteer with the Utah Wilderness Coalition. Krista and I had met in enough different situations that we knew we were destined to be friends. As the hour of the auction approached and the number of protesters dwindled in the brutal cold Bowers said, “Let’s go in. I want to see how much the soul of our nation is selling for.” I registered for a press pass as the guards took her bag apart and debated letting her in. We visited the ladies room and when we came out, no one was there. We went up to the auction.

I moved to the front, as photographers do. One parcel went for $7.50 an acre plus a dollar a year for the lease; could that be right? The world had gone mad. I turned to study the bidders. I photographed them, to help me understand what I was witnessing.

“You can tell the parcels that have oil and gas,” she said; “they’re going for higher prices.” I realized I’d been focusing on the lower prices and went back to photograph one higher bid. I left feeling sick. 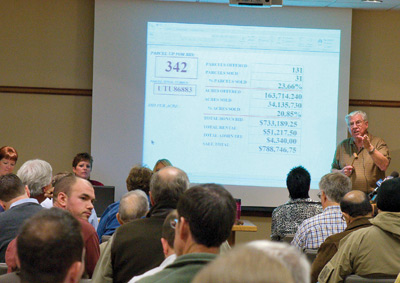 That night Bowers told me what happened after I’d left: Tim deChristopher, a fellow she knew from church, community gardens and Bioneers, had pushed up bids over $500,000 and won 14 parcels totaling 22,500 acres for $1.8 million.

“I knew I had the potential to take some parcels off the table, that I could win parcels and potentially protect some of this land,” deChristopher told me when we met a few days later. “I also realized there would be big consequences—possibly even prison time if I went down that road. I looked back and saw Krista getting emotional and that was one of the things that did help to push me…. I knew ethically I couldn’t justify not taking that action. I felt a tremendous sense of efficacy.”

Efficacy—the capacity to produce a desired size of an effect under ideal or optimal conditions. It is deChristopher’s word. He owned it that day.

After years of writing letters, carrying signs, protesting, signing petitions, going to conferences, volunteering in National Parks and talking with Rep. Jim Matheson, he felt nothing could affect the situation as much as winning those bids.

Earlier last year he had the opportunity to speak with Terry Root, Nobel Prize laureate and an author of the International Panel on Climate Change (IPCC). “She explained to me the IPCC, as a scientific body, couldn’t come up with any scenario that would get us to the point of avoiding the worst-case scenarios that climate scientists were studying. ‘I am sorry my generation has failed yours. There are things we could have done in the ’80s and there were things we could have done in the ’90s but I think it is too late,’ she said. To have a Nobel Prize winner tell me I did not have a future was a pretty powerful thing.”

The day after the auction Patrick Shea, the former head of the BLM in the Clinton administration, called deChristopher and offered to legally represent him pro bono.

Whether you agree or disagree with his actions, deChristopher has opened a conversation about civil disobedience: What is an individual willing to put on the line? I was impressed with his bravery, his willingness to take a stand for what he believes in.

And Tim deChristopher has offered hope to many others, and hope for Utah’s wildlands. We wish him well.

For more information on the current status of the BLM parcels and Tim deChristopher, visit www.oneutah.org and Bidder70.org.

This article was originally published on December 31, 2008.