This time they can see our pain

You can call the protest violent. By the end, it was. But understand that when you do so, when all you are willing to see is the parts of activism that make you most uncom­fortable, you risk drawing the conversation away from the reasons for the protests and riots, happening now with more vigor and rage than ever before.

Perhaps the worst thing we can do right now is focus on riots and looting yet remain silent about the murders, the racism, white supremacy and the longstanding inability of our society to protect and respect black lives.

Attending Saturday’s downtown protest was, for me, an act of listening to and trying to understand our black community and their anger, hurt and resilience. Some white protestors were clearly there to advance their own agendas and express personal rage, but watching hundreds of people—groups of friends, siblings, whole families—march or drive around downtown and up to the state capitol to demonstrate was to observe the important practice of allyship. https://guidetoallyship.com/

Organized by Utah Against Police Brutality, the car caravan rally route began in front of the Public Safety building  just east of the Downtown Library. I ended up near the end of the long lanes of participants, stuck in traffic near the intersection of State Street and 500 South. Here, the view was incredible. People spilled out of car windows and poked out of sunroofs. Signs read “Stop killing black people,” “Silence is violence” and “My skin is not a weapon.” Chanters called “Black lives matter!” and “No justice, no peace, no racist police.” 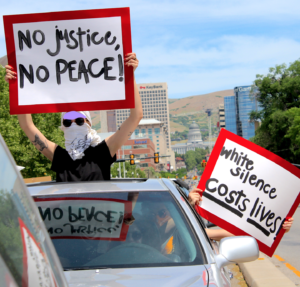 Many people, most wearing masks, had given up their cars and were walking at that point, and we honked and waved at them as they passed. Did everyone know where they were going? We moved together, as one, like a school of fish, strong and able to protect itself from predators.

Even as the tune changed and different factions grew violent as police moved in, it was clear that, for whites, this gathering was about listening and trying to understand.

In my post-protest discussions, one black friend said that for some time now he’s felt as if he was watching something like the genocide of his own people, as images and videos of dead black bodies filter across phone and tv screens with grievous regularity. Another said that one of the most helpful things white people can do right now is to talk about racism. Confront it in your social circles. Listen to black people and believe them.

Thus, I realized that in writing about the protest, it is not my perspective you need to hear. Instead, I share with you the voice of one of my former students, a 15-year-old from Rwanda who moved to Utah a few years ago. He attends a predominantly white school.

Conversation with a young black student

When he first heard about George Floyd’s death, his reaction centered on a realization that this was the norm—another black person was murdered by police. He explained that racial aggression and even death by police is something black people can’t help but fear in daily life.

“It’s always the same… what cops do to black people. We can’t just be. For example, when I go to the gym, my mom, she tells me to take my hood off. She says people might think I’m a thug or whatever just because of the way that I look.”

At school, not only could white friends wear their sweatshirt hoods up without having to confront that lingering association, but sometimes they’d make pointed comments at him that always felt uncomfortable.

“Every time, they’re like ‘Can I touch your hair?’ I mean that’s not racist, but it makes you feel different.” Some might dismiss a question like this as inconsequential, but repeated invasive comments (known as microaggressions) can lead to a person feeling isolated, especially in largely white institutions where they might be the only ones ever asked such questions. What’s more, black hair has a political history in the US.

While “black” hair is often seen as exotic or unprofessional, “white” hair is accepted as the norm: neat and professional. Many school and company dresscodes restrict historically black hairdos such as braids, dreadlocks and bantu knots. My student also discussed his hesitation at wearing his favorite hairstyle, dreads, due to his mother’s fear that he might be seen as thuggish and disobedient—an inconvenient association in school and a dangerous association on the streets.

He is the hardest working teen I know, yet his economic and racial status put him at a disadvantage to succeed in many aspects of the school system.

For instance, he is an excellent soccer player and carried his school’s junior varsity team. I was certain he would be the very next pick for varsity.

“When I was sad about not making the varsity soccer team… I don’t think it was because I wasn’t good enough,” he told me. The high school team this student tried out for is nearly entirely composed of white players and is notorious for parent politics involved in the selection process. At the time, it frustrated me greatly that the coaches picked a different student over him.

Making it on varsity is extremely important to him. The more years on the school’s best team, the more likelihood of being scouted by colleges. If he doesn’t make the varsity soccer team next year, he may switch to track and field as a route to the exposure necessary for scholarships despite his enduring love for soccer.

His school certainly lacks teachers and staff of color, but the silence of his white teachers is what bothers him most. “My teachers don’t talk about [race]. They fear to talk about it. When it comes up, they go silent.”

Regarding the late May protest, he said he wanted to go but “for me, that’s taking a big risk.”

He might wish he could go to the protest. He also wishes he could wear dreads without his mother fearing for his life.

But when the police see you differently, he acknowledged, that’s when it becomes the deadliest problem.

“I try to be good to everybody at school. But I can’t always take the time to explain [my experiences with racism] to everyone. Sometimes I can see they don’t believe me,” he confessed.

“But to be honest, I love these protests. A good thing I see right now is that this time, there are white people there. This time they can see our pain.

“At the end of the year, when I go back to school, people are going to understand better. Maybe they will listen.”

This article was originally published on June 2, 2020.