This is the Place—Robert Place

Robert Place’s first Tarot deck came to him in a series of revelations. He says there was a magical quality about how it all happened, almost like the deck wanted to be made, and it wanted him to make it. Vivid dreams and spontaneous visions showed him that the Medieval alchemists’ search for transmutation and enlightenment were interchangeable with traditional Tarot decks’ allegories and symbolism.

This inspired an eight-year study of the mystical and the esoteric: alchemy, Neoplatonism, Hermeticism, Gnosticism, Christian Mysticism and Kabalah.

His search was to understand the deep symbolism of traditional Tarot decks and bridge those decks’ original meaning with Tarot as a modern tool for personal transformation. That journey produced the now-classic The Alchemical Tarot in 1995, and it is still his most famous deck. 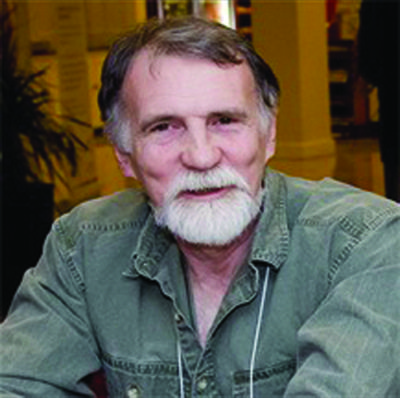 It also began Place’s evolution as creator, artist and author of some of the most well-regarded Tarot books and decks in the field today, including The Tarot of the Sevenfold Mystery, The Buddha Tarot, The Angels Tarot, The Vampire Tarot and The Tarot: History, Symbolism, and Divination. He is internationally known as an expert on Tarot’s historical connection with Western mystical traditions and Renaissance iconography. He’ll bring that expertise to Salt Lake in September, leading a two-day Salt Lake workshop, “The Tarot and Spiritual Transformation,” sponsored by Rising Pathways of Utah, which produces immersive personal growth workshops and symposiums.

Place never imagined himself as a writer, but synchronicity happened and suddenly he was a writer. His first article was for Gnosis magazine; his writing opportunities grew from there. He is first, though, an artist.

“I was born knowing I was an artist. Since holding a crayon. I could draw at a very, very early age,” he says.

Next, in grade school he developed a fascination for ancient religions and symbolism, passionately creating Greek and Roman gods and goddess portraits.

“My decks are modern decks,” he says, “but I want to understand Tarot in a deeper way.” He wants to know Tarot’s childhood, its beginnings: What did the original Renais­sance Tarot deck artists mean to convey with the symbolism chosen? Sometimes, for Place, those original meanings are more profound than what modern occultists ascribe. There is power in these images, he says. “I’ve had experiences that took me to great cosmic insight, just spontaneously.” He wanted to know: How did it get there? Where it come from?

He found that various mystical traditions’ paths towards illumination have similar archetypes, and these have informed his personal-favorite decks. Place translated the alchemist’s quest for gold and the Buddha’s path into the Tarot trumps of The Alchemical Tarot and The Buddha Tarot. These same enlightenment allegories are also found in his newest Tarot deck, The Tarot of the Sevenfold Mystery. He describes three soul levels to travel through: Soul of Appetite, Soul of Will and Soul of Reason. The journey to inner wisdom—the gold—requires a conscious harmonizing of each. 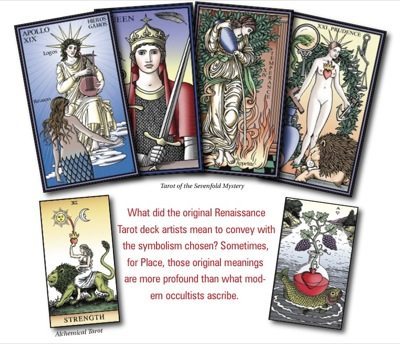 Place will be in Salt Lake in September, where participants will explore his art, ideas and techniques for themselves. This is a don’t-miss opportunity for Tarotists of all levels to work with an international authority. His workshop will offer more in-depth understanding of Tarot and deeper self-wisdom from reading techniques that open up access to higher wisdom. Rising Pathways organizer George Garvin says, “In Robert’s view, the Tarot describes ‘the Fool’s journey’—from unconsciousness to consciousness, disunity to wholeness, delusion to wisdom. Spiritual transformation and discovery is the purpose.”

Place sums up: “Symbols are a powerful visual communication with your higher self. What I’m trying to do is give you a way for the cards to talk to you, become a bridge, tell you a story. To let you become more in tune with your own unconscious.”