Theatre: What Would Dottie Do?

Dottie S. Dixon has had quite the buzz around her lately. The Utah gay rights activist/radio personality is gearing up for her upcoming one-woman play. “The Pas­sion of Sister Dottie S. Dixon” next month at the Rose Wagner Theater. The play is a Latter-day retelling of the Joan of Arc story, but Joan, in this case, is a Spanish Fork housewife turned gay-rights activist.

In her three years as radio host of KCRL’s “What Not, What Have You, and Such as That,” Dixon has been an important bridge in Utah’s complex LDS/queer divide. “I’m a 10th-generation Latter-day Saint [and] am the proud mother of a gay son,” Dixon writes in her Facebook profile. “I’m a good-will ambassador for all organizations that advocate for human equality.” She is outspoken, fiery, hilarious and not, well… real…, at least in the traditional sense of the word. 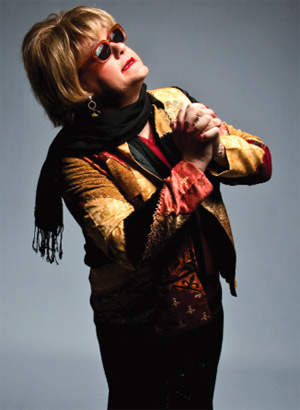 Troy Williams and Charles Lynn Frost conceived of Dottie three years ago as a breath of fresh air and humor in William’s otherwise serious (and now defunct) weekly radio show Now Queer This. “So much of gay cinema, theater and literature has focused on the tragedy of being gay,” Williams says. “The purpose of Dottie is to celebrate our diversity with humor and joy. Dottie sees being gay as a blessing. Even though she is an active Mormon, the experience of having a gay son has opened her heart to a new understanding.” Williams wanted to create an alternative discussion that is about courage, strength and change.

While Dottie was born out of a desire to bring levity to a difficult discussion, the seriousness of the content transcends the message’s humorous medium.

Frost, the actor who channels and co-created Dottie, patterned her after his own mother and the wise Mormon women he grew up under in Spanish Fork. “We don’t want her to be in the in- illuminati crowd,” he says, “she’s clumsy and clunky, she’s not educated, but she’s wise.” She’s full of Utah vernacular, and she charmingly misinterprets history, theology and current events (which is a big part of what makes her so funny). But Williams and Frost are never laughing at Dottie.

“In a strange way the play helps me go back and embrace my Mormonness,” Williams says. “Coming out, you’re angry and want to push away and be angry, but at a certain point you have to come back.” Frost agrees. “You have to embrace who you are, who you were, and you have to embrace your heritage,” he says.

So, while Dottie is not technically real, she has taken on a life of her own. She has a style and moral sensibility that is uniquely hers. While writing the play, when either Frost or Williams’ own opinions would start to come through too strongly, they would stop and ask themselves, “What would Dottie do?”

In the play the audience will get to share many of the issues in Dottie’s history that made her who she is, including her reaction after her son came out to her. “It’s not im­mediately easy,” Frost says. Dottie struggles as she faces the terrible decision of choosing her church or her child, but, as Frost explains, ultimately for Dottie there is no choice: It’s child. Not easy for a woman who, as Williams says, “loves her child and she loves her heritage and her ancestors.”

Ultimately in the play Dottie is able to see that the choice is not an either/or, but a both/and: She chooses her child and her church, which points to the play’s rich spiritual understructure. Her both/and epiphany comes from Williams’ study of Ken Wilbur’s integral theory, as well as his inclusive, collaborative spirit. In integral theory, he says, you include and transcend, which is what Dottie is all about.

Williams is also focused on creating new paradigms through Dottie. “I really want to talk about how the stories we tell about our lives actually can shape the reality that we experience…that’s really why we decided to tackle gay issues in a joyful, comedic manner. It’s time we changed the story so that the Earth can start to heal!”

In other ways Dottie is real. “How did you meet Dottie Dixon?” Troy’s friends have asked him, “was it through her son, Donnie?” She’s so compelling; you just want to suspend disbelief. This is a sentiment echoed by her 1,500 Facebook friends. Williams says Dottie gets fan mail all the time. “People will write in messages like ‘I love you Dottie, I wish you were my mother.'”

Dottie is “an instrument for people to say, ‘I want to forgive some things,'” Frost says. Some big things, like their parents, and their church. Or, in the words of Dottie Dixon herself, “I believe a new day is dawnin’ in this here state, and I’m all up in it! Hope you are too!”

Amie Tullius writes about the arts for CATALYST.