The world premieres of Mama (Carleton Bluford’s celebration of mothers and motherhood) and A/Version of Events (Matthew Ivan Bennett’s claustrophobic road trip about healing at different speeds) are next up in Plan-B Theatre’s 2014/15 season of new plays by Utah playwrights. 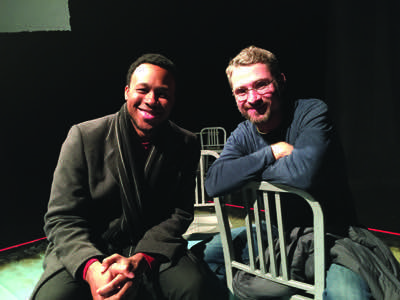 I moved to New York in the fall of 2013 to Make It. My friends would talk about making The Move and doing Big Things. I wanted to be in a place of action instead of a place of inaction. So one day I just went. Without any money. Or really thinking about where I’d work or make money. I just left. Very reckless. But ultimately it was necessary for me to challenge myself in that way. I was very lost, wondering what I’d like to do with my life. I ultimately decided to come back to Utah because I realized that it would take me years to get the chance to maybe do a little bit of the work there I was consistently doing here. And I couldn’t go one more day trying to survive on crackers and peanut butter.

While in New York, I read about the call for submissions for playwrights under 35 from Plan-B Theatre and the David Ross Fetzer Foundation for Emerging Artists. David and I had become good friends while working on The Third Crossing together at Plan-B. We would talk about what theater can be. So I was excited about submitting and figured I could really offer something as a young playwright with that sort of vision, something that would honor David’s memory. So I decided to write something Very Important that would really get everyone’s attention, Something That Would Change the World.

While in pursuit of Something Important, the idea that would become my play Mama was inhabiting more and more of my brain. Being across the country from my own amazing mother, I thought a lot about how mothers give us life and show us who and how to be. And then I started thinking about the ability mothers have to make sacrifices for their children. Even not-so-good mothers leave a mark. And then I started thinking about how I spend so much time trying to make my mother proud that I don’t spend as much time as I should with her.

So I said to myself, “Okay, write this, get it out of the way and then I’ll submit the next thing I write.” So I set pen to paper (well, fingers to keyboard) and out came Mama. It isn’t directly about my mother – it’s about many mothers, some real, some not-so-real, some good, some not-so-good – but it is for her.

I submitted it to Plan-B and the Davey Foundation and somehow it was selected out of 24 submissions.

I guess I ended up writing Some­thing Important after all, even if only my mother sees it that way. Writing Mama taught me to write what I connect to, not what I think people will like. Trying to prove myself only serves myself. I’ve been writing for years but am just now beginning to understand what it is to be a playwright. I quite like it.

In a way, playwriting is masochism.

A prettier, more intellectual way to say that would be: Playwriting is a conscious literary confrontation of the author’s pain, confusion and weaknesses of belief. But there’s no way around the fact that sometimes it means splitting open old wounds. You do this in the hope that the wound will heal properly now, I guess—straighter, cleaner, without inflammation.

The wound in question with my new play A/Version of Events is the short life, and quick but agonizing death, of my little brother Benja­min. At least, that’s the emotional germ of the play. Plot-wise, it isn’t me rehashing those events one-to-one, but more me trying to make sense of my 18-year-old emotions. My brother Benjamin was born with Trisomy 18, a catastrophic gene disorder. My parents’ doctor had recommended my mom get an abortion, but they chose to have him, for as long as his genes and chance and God would allow. For them, as parents, the whole experience was faith-affirming. For me, as son and brother, it crushed my belief system into an angry grey writhing uncertainty. There was no question: Ben­jamin was in pain, and barring a miracle he had no hope for a normal little boy’s future. I saw no God in that.

In writing the play, I decided to let these opposites of experience co-exist and collide in the guise of a young couple on a road trip, Cooper and Hannah. I further decided not to stake out a position. (The most painful part of the process.) It’s not a play about whether God exists, but about how we manage to live, and be in love with, a person who interprets death differently than you. How do we let our lovers have their version of events? With distance, it’s easy to say something like, “It’s better to be good than right,” but with no distance at all, how do you do it?