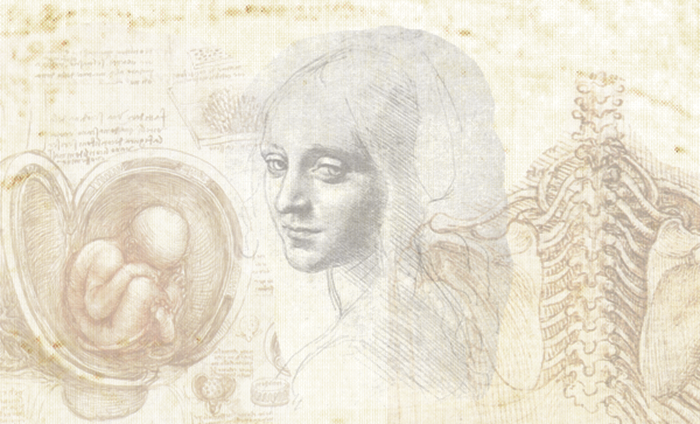 Salt Lake playwright Matthew Bennett searches the famous notebooks for clues to the man himself.

A little over two years ago I called playwright Matthew Ivan Bennett and asked him to write a play about Leonardo da Vinci, widely considered the most talented human ever to have lived. Silence. Given his tentative “Sure,” I wasn’t prepared for power of the contents of the document that would arrive in my inbox a few months later-it was the most complete first draft of a play I have ever encountered.

Matt confesses he was nonplussed in the beginning. “I knew that (to write a play about Leonardo as more than a tribute, I needed to see him as a man and not as an artistic Hercules. I got that glimpse of him through biographer Serge Bramley’s “Leonardo: The Artist and the Man,” where I became aware that Leonardo wrote disparagingly of himself in his diary. Then flipping through a book of collected paintings, the idea hit to have his paintings narrate the play. Who better to speak for him?”

The narrators were quickly chosen. The enigmatic La Gioconda (Mona Lisa) was a given; Judas Iscariot (from “The Last Supper”) would serve as a foil to the idealistic, attention-deficit-disordered Leonardo; and a sketch of Isabella d’Este (dubbed the First Lady of the Renaissance) would add gravitas to the narrative trio. Each of them represents failure for Leonardo: the Mona Lisa was never delivered to his patron, Judas was especially troublesome for him to paint, and he never finished the painting of d’Este as promised. They also represent mystery, self-loathing and nobility.

“Tell me if anything has ever been achieved?” This question appears throughout Leonardo’s notebooks. Matt realized this question must become the centerpiece of the play: Matt was relieved: His superman had become human.

A bump in the road

Ten days before rehearsals were to begin I received a late-night phone call from Jesse Harward, who had been preparing to play the role of Leonardo da Vinci for nearly a year. He’d torn both his ACL and MCL while playing basketball; it was clear he would be unable to continue with the production.

Fortuitously, Michael Brusasco, who’d played the role when we workshopped the play last summer (as part of Utah Shakespearean Festival’s New American Playwrights Project), was in town for another production. I caught him backstage during the final performance. He agreed to join the cast, and seamlessly joined Kirt Bateman as Judas Iscariot, Tracie Merrill as La Gioconda and Teresa Sanderson as Isabella d’Este.

Leonardo da Vinci truly was a man ahead of his time-it may sound like a cliché until you realize he’s the original source of that phrase. The hope is that “Di Esperienza” turns myth on its ear, stripping away the deification that comes with death and time. Randy Rasmussen, Plan-B’s resident set designer, muses: “Heroes like Leonardo are flawed-they make mistakes, they have dark things in their closets. Just like the rest of us.”

So how do you place yourself inside a genius that seems incomprehensible? Jann Haworth’s costume design provides a road map. (One of the few female members of the British Pop Art Movement, Jann co-designed the cover of the The Beatles’ “Sergeant Pepper’s Lonely Hearts Club Band” album.) Her costumes create a context for the production-contemporary clothing with a renaissance flair, literally placing the here-and-now inside the world of Leonardo da Vinci, a world that has been part of her artistic vision since the fourth grade: “My teacher Mr. Himmelfarb asked me to make a mural about flight. So my mother gave me her book on the life of da Vinci, which was peppered with drawings. I decided to make the centerpiece of the mural Leonardo’s drawing of himself in his later years. The amazement that I felt as a child ‘discovering’ him still energizes aspects of my creative work today.”

Getting to know Leonardo as a modern man is the joy of “Di Esperienza.”

Jerry Rapier is producing director of Plan-B Theatre Co. and has written for CATALYST since 2001.