The Yin and Yang of Activism 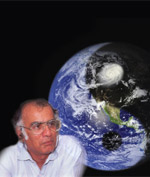 Dr. Arjun Makhijani is the author of “Carbon-free and Nuclear-free: A Roadmap for U.S. Energy Policy,” an exhaustive study that shows how the U.S. can eliminate carbon from its energy portfolio without resorting to the use of nuclear power. He shows how this is possible technologically and demonstrates that our economic prosperity actually depends on it.

Dr. Arjun Makhijani is the author of “Carbon-free and Nuclear-free: A Roadmap for U.S. Energy Policy,” an exhaustive study that shows how the U.S. can eliminate carbon from its energy portfolio without resorting to the use of nuclear power. He shows how this is possible technologically and demonstrates that our economic prosperity actually depends on it.

Makhijani’s background is not in grassroots advocacy, but in nuclear fusion and electrical engineering, the areas for which he received his Ph.D at U.C. Berkeley. For years afterward, Makhijani had used his scientific knowledge and research background to craft public policy on energy and nuclear issues, working for the Carter Administration, the U.N. and countless others.

In 1987, wanting to use his exper­tise to increase public involvement in and control over environmental issues, he founded the In­sti­tute for Energy and Environ­men­tal Research (IEER) which provides scientific information to nonprofits, media outlets and government agencies around the world.

Makhijani realized that, while many nonprofits engage in activism on complex environmental issues, few have the resources or expertise to tackle the specialized science behind these problems. IEER focuses on energy-related climate issues as well as environmental and security aspects of nuclear weapons production and nuclear technology, providing the “the brains” behind “the activism” of countless environmental groups around the country.

It was in this capacity that the nonprofit group I work for, HEAL-Utah (Healthy Environment Alliance of Utah) first began working with Makhijani. HEAL formed in the 1990s as a watchdog group for the chemical weapons incinerator near Tooele. Its main function has always been to “hold the line”-against the Private Fuel Storage’s proposal to store spent nuclear power rods on the Goshute Indian Reservation 40 miles from Salt Lake and, later, against EnergySolutions’ constant attempts to expand the size of its dump or the intensity of its waste streams. We are now embarking on bridge-building: communicating with those who don’t always agree with us on these related issues.

In 2007, then-Utah State Rep. Aaron Tilton (R-Springville) announced that he had formed a company called Transition Power to develop up to four nuclear reactors near Green River, Utah. At this time he served on the Utah House of Representatives’ Public Utilities and Technology Committee (PUTC)-the government body that makes energy policy. This conflict of interest was compounded when Tilton agreed to buy some of the water rights needed for his plant from the Kane County Water Conservancy District, whose executive director, Mike Noel (R-Kanab) was the PUTC chair.

Looking harder at nuclear power and realizing what a terrible idea it was for Utah, HEAL began talking to policy makers about the problems associated with the nuclear fuel cycle.

The obvious question was always asked: How do you expect to turn on the lights? Environmental groups have long pushed for alternatives to coal-fired power plants and other fossil fuels, and for good reason. But regulators and policy makers have been squeezed into a corner trying to match electricity supply in the coming decades with a growing population and burgeoning demand.

HEAL-Utah’s answer was to enlist Makhijani to show that renewables need to be considered just as seriously as they were looking at nuclear power.

Whether one believes climate change is a concern or not, the reality is that our electricity bills are going to increase in the coming years, and that argument is not lost on Utah policy makers.

The Obama administration and leaders in Congress have indicated they will impose limits on national greenhouse gas emissions, perhaps as high as a 90% reduction in our current emissions by the year 2050. The EPA is also set to decide if carbon should be regulated under the Clean Air Act.

Aaron Tilton’s nuclear plant proposal for Green River fueled HEAL’s desire for a paradigm shift in the way we produce and consume energy. The result: the eUtah study. The first of its kind in the country, it is assessing how we can transition our electrical grid away from fossil fuels and nuclear power and make the switch to renewables in an economical and technologically feasible way.

Makhijani’s Carbon-free and Nuclear-free roadmap offers a framework for moving forward. The eUtah study, which he helped HEAL develop, provides the concrete model on how to do this. In essence, it posits that we re-structure the electrical grid so that we integrate renewable resources together with new technologies, over a large geographic area, and make the supply and demand parts of the grid “talk to each other.” For instance, coordinating a wind resource over a large geographical area, rather than just one small installation, makes it more reliable.

The meat of the matter

The renewable resources for the U.S. are vast and virtually untapped, Makhijani found in his research for Carbon-free and Nuclear-free. Avail­able wind resources in the Rocky Mountain states and 12 Midwestern states could produce energy equal to about 2.5 times the entire electri­city production of the U.S. Six of those states’ wind potential is greater than all the electricity generated from our current fleet of 103 nuclear reactors.

Solar resources are great as well. If we look at the high-insolation areas of the Southwest and West, solar energy production there alone could provide 15% of our total generation, using existing technologies.

Utah as a national model

When HEAL and Makhijani began this project, they had to consider exactly how they would do it. Says HEAL’s Executive Director Vanessa Pierce, “We asked: Just what can renewables really do for Utah? Can we practically and economically make the transition away from coal and still be able to reliably turn on the lights? And, just as importantly, can we do it without resorting to the use of nuclear power?”

One aim or the eUtah study is to help the state better assess the risks, costs and pay-offs of resources such as coal, wind, solar, geothermal, biofuel, natural gas, and nuclear in a carbon-constrained world. It is a more holistic approach to re­source planning and production.

Examining opportunities for energy efficiency will also have a large role in the study. Changing our building codes and standards, saving energy on lighting and appliances and making our heating and cooling systems operate more efficiently will yield upward of 20-30% in energy savings.

In addition to Makjijani, researchers from BYU and Utah State are also involved in the eUtah research. An advisory board of energy experts with regulatory, political and utility expertise as well as stakeholders in significant energy-using industries have signed on to shepherd the initial outline and critique the scope of the study.

“This is a paradigm shift,” Pierce reiterates, “but there’s no engineering reason that a 100% renewable electrical grid can’t be done. We just need to apply a little more brain power to how we structure our utility system.”

Next year HEAL will take the study’s recommendations to our legislators to be enacted into sound policies. Building bridges and holding the line. A little yin, a little yang-we need a little of both in everything we do. Especially in creating a healthier democracy, as it is reflected in a healthier environment. I urge you, whatever you do, to become thoroughly engaged in promoting both.

Sophia Nicholas works for HEAL Utah. She sometimes has time to do other things, too. Like write about HEAL Utah. To learn more about these issues, visit HealUtah.org