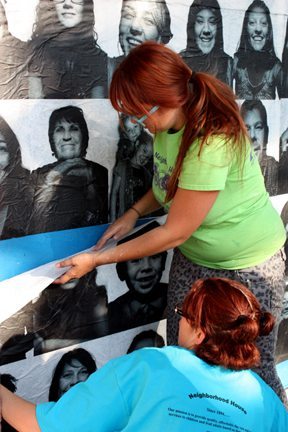 Celia and Kevin Bell: Life on a westside homestead.

5:56 a.m. The sun breaks over the mountains and houses to the east of the little home we recently purchased on Salt Lake’s west side. The cheerful summer light ricochets off the 70-year-old white paint on our garage, through the bedroom window, and unto my eyelids, where it turns into cheerfully jabby little needles, forcing me to stumble up and draw the blinds.

6:17 a.m. Our accidental rooster (the chicken that turned out to be not so chick-y after all) starts up his adolescent attempts at crowing. His call sounds like a cross between an ’84 Buick turning over and a wet cat clawing its way out of a rusty accordion.
6:24 a.m.: I contemplate beating him to death with one of the home improvement books stacked beside the bed (a fantasy I embellish with more gruesome details every morning).
8:15 a.m. Resting deeply.
8:16 a.m.: The no-really-seriously-I-mean-it-this-time-you-lazy-lazy-bastard alarm goes off. I finally get up, showing very little salt-of-the-earth, up-at-dawn moxie. I clearly don’t have the hang of this urban farming thing yet.

We have a paltry poultry flock (eight chickens, with one disqualified on account of dudeliness) and a total n00b’s garden. Our tiny plot of scraggly tomatoes, cucumbers, and peppers is surrounded by hulking weeds, looking like nothing so much as the chess club prior to an unfortunate lunch-money incident. (We have seriously delinquent weeds—they have tattoos, and I caught them smoking behind our shed last week.)

This stands in sharp contrast to Celia and Kevin Bell’s farm; last month I had the chance to visit the Bells’ urban homestead, a half-acre plot nestled among more traditional suburban sprawl of the westside Glendale neighborhood. Celia was sitting in the shade, grooming the dog, when I arrived; Kevin soon came home from a motorcycle ride to Evanston—a display of leisure almost impossible to believe once the tour began.

The Bells’ garden is … beatific. Hop vines lick like green fire up the back of their garage-cum-drying-shed, casting dappled shadows over the walls. The chickens, glossy and plump, clucked contentedly in their enclosure. Different varieties of lettuce grow in buttery, lush pastel swirls. And the garden is expansive, truly a farm. Although in the past the Bells have grown produce to sell, they are currently planting for their own use—consuming the fresh produce or preserving it for use in winter months.

Winter squash, cabbages, onions and garlic are stored. Plastic row covers will extend the growing season for the hardier root and salad greens: kale, collards, lettuce, spinach, arugula, carrot, beets and turnips. During our June visit, the Bells showed us empty beds destined to hold edamame or other beans—the benefit, Kevin points out, is that the beans can be planted and forgotten until winter rolls around and there’s time to deal with them; in fact the season itself does some of the work: “When everything else has come and gone, these are drying on the vine.” Celia mentions that they shell the dried beans, or prepare the popcorn they also grow, while they snuggle down to watch movies.

Using Google’s 3D modeling program SketchUp, Kevin designed their chicken coop. The nest boxes and droppings trays under the roosts are designed around bottomless drawers that allow one to push the wheelbarrow right up outside and pull the drawer out, so the chicken-derived mess falls easily into the barrow for transport. The central location of the coop means that planting area and chicken run can be switched each year.

The chickens do most of the tilling and weed-, seed- and bug-eating during fallow times, in preparation for next season’s planting. They also perform the important job of laying eggs; the Black Sex Link breed, in addition to being hardy through Utah’s chilly winters, shows sex-linked coloration (as the more astute reader has likely already guessed from the name), so the Bells are sure to have all hens—and have wisely avoided the necessity of early morning rooster-throttling. Once their usefulness as layers has passed, the chickens end up as chicken stock, adding another source of backyard-derived food to the Bells’ pantry,

The Bells’ plot—a twentieth of a Salt Lake City block—is a serious undertaking for an urban couple. I ask how it is that they have succeeded in a project that, while seductive, also looks pretty daunting from my perspective. Kevin says he credits their success so far to the fact that they graduated from college debt-free, working concrete in summers (simultaneously developing the body strength and a few other skills that would come in handy later on) and then living on a working farm for several years before entering into their own experiment.

The Bells have given their farm an unusual name: Simplephat. On a Greyhound back to Salt Lake, the Bells—out of college and learning the ropes at an intentional farming community in Missouri—were sitting near a group of Kansas City teenage gangbangers, and overheard them talking about getting out of town after a friend was gunned down on the street. Striking up a conversation, one teen reacted with recognition when the Bells talked about their work as homesteaders, telling them about a cousin who had moved to “simplephat”—a semi-mythical place removed from the urban topography where city dwellers could go to live clean, healthy—and long—lives. Like legends throughout the ages, all of the teenagers knew of someone who moved to simplephat, and they all wanted to seek it out for themselves—one day.

The benefits of connection to the land and of physical labor, as well as the in-the-moment living physical labor encourages, are frequently mentioned in conjunction with the urban farming movement. But the allure is simpler than that.

Most of us will spend significant portions of our lives living on other people’s time—hitting someone else’s targets, meeting someone else’s bottom line. The benefits to each day’s hard labor is as clear for the Bells as are the challenges. By centering our work around our own real needs, we see the impact of that work on our family, friends and our local community—human, flora and fauna.

As with the Kansas City teenagers they met years ago, the Bells are willing to share their map for finding simplephat. Kevin and Celia have not only opened their own farm to would-be urban farmers looking to learn, but to Salt Lake’s youth, including members of the Boing collective and former runaways. They live their dedication in their work, spreading knowledge and resources throughout the community.

Celia Bell works as Horticulture Education Specialist for Volunteers of America, using the knowledge gleaned from her formal educational background in zoology, botany, and chemistry, as well as that gained quite literally in the field, to help local women who are homeless and detoxing. As Salt Lake City’s GIS coordinator, Kevin Bell involved students from the University of Utah in creating the city’s new solar mapping interface, which allows users to look at the sunshed for the city, their neighborhood or their home. The next project will look at using this data to calculate maximum yields, putting high-tech tools in the hands of would-be farmers like my fiancé and me.

So while I’ll be lucky to find a single ripe tomato or strawberry under the bindweed this year at my own quote-unquote homestead, there are plenty of resources to see me and any other potential urban farmers through. Celia says she and her husband have learned the ropes from hands-on teachings they’ve received from more experienced farmers as well as by the cumulative knowledge found in their impressive wall of books—but there is no substitute for the knowledge they’ve gained from their own trial-and-error experiments. With a community of seasoned farmers like the Bells in Salt Lake, a plausible excuse to buy more books, and plenty of error under my belt, there may be hope yet.

Adele Flail is an artist and a burgeoning urban homesteader on SLC’s west side. She is also coordinator for The Leonardo.