“The Revenge of Yoga” The musical

Stephen Brown has concocted yet another sublime, ridiculous work, a sequal to last year’s yoga satire.

A curry-flavored funk rock musical about the om-holes of YogAngeles and their quest for Enlightenment Lite. Two acts with intermission. 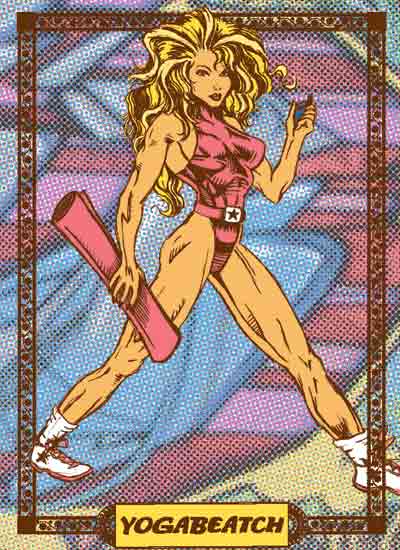 If you are the sort of person who thinks that yoga is a deadly serious spiritual practice and not an appropriate subject for satire or hip-hop parody, then you should definitely avoid the new (or at any rate, upgraded) SB Dance show, “Revenge of Yoga the Musical.”

On the other hand, if you are that sort of person you are going to miss some really fabulous musical theatre. SB Dance did a beta-version of this show last year (“Yoga: the Musical”) and it ended with a standing ovation from the audience and a titillating cliffhanger: “to be continued in June 2008.” Now that it is June 2008, I for one can hardly wait to see Part II with the promised surprise ending.

It’s going to be “a bigger, badder, boogier version,” says SB Dance director Stephen Brown. “It’s like last year was the pilot and this is the fully revved machine. We’ve taken last year’s show and rewritten about 70%, and that’s Act I. The other half is completely new.” Some of the original cast was not available, and most of the roles have been reworked to make optimal use of singing, acting, dancing and yoga talents. If you liked last year’s show, the new version has evolved into a show that is almost, but not quite completely different.

It ought to be said that last year’s show really was good enough to be worth developing into a full-blown musical-the wickedly funny story has to do with rival yoga teachers scheming to take over America’s yogic psyche. There is an energetic funk/hip-hop/rock score by Ricklen Nobis, Jeffrey Price and Jimmy Fassler, comic lyrics by poet Sheri Zollinger and inventive dance numbers by Stephen Brown that blend elements of hip-hop, yoga postures and Bob Fosse.

When I dropped by the Rose Wagner studio to get a sneak preview, the cast went through a series of meditative yoga asanas and then got busy hamming it up for a number that is pure Broadway. Stephen Brown passed out bamboo canes, and reminded everyone, “Remember, it’s not about originality, it’s about cheese!” He rejected one move as “too modern dance” and put the cast through their moves until the comic timing worked so well that even the dancers were laughing.

Even if you don’t know the difference between downward-facing-dog and Underdog, you’ve got to admit that there is something inherently funny about a spiritual practice that results in an ultra-hot bod. In any case, yoga in this show is just a vehicle for universal themes about claiming higher consciousness in order to jockey for political power and using spirituality to sell a product. “It’s Monty Python with a message,” says Brown. “You can teach something by being satirical. It has a lot to say about the culture we live in, how America tries to eat yoga but it turns out yoga might eat America.” 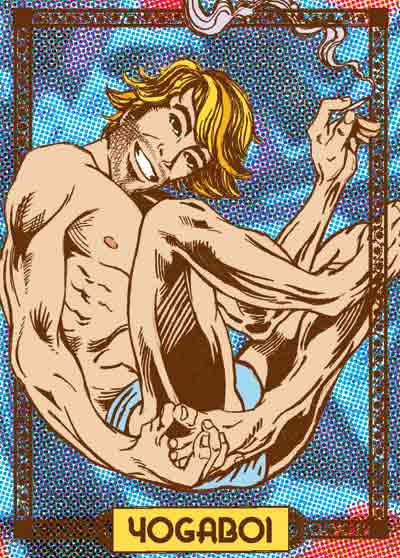 Stephen Brown should know, since when he’s not choreographing dance or writing musicals, he teaches at Centered City Yoga. He is well aware that a good teacher can weave the mental, spiritual and physical elements of yoga practice into something that is much more than simply a workout. But still, yoga in America has changed significantly from its origins in India. “There are inherent paradoxes,” says Brown. “Here in this country you cannot exist solely as a sadhu or spiritual teacher-you’ve got to make money. But then Madison Avenue gets involved and pretty soon we get diamond-studded ohm jewelry.” Or, he might have added, Revenge of Yoga trading cards (collect all six at the fine local businesses listed on the SBDance website).

It’s exciting to see home-grown musical theatre with this level of ingenuity and talent. Stephen Brown thinks that “Revenge of Yoga the Musical” has potential to have a much larger appeal than just to SB Dance’s loyal but somewhat cultish audience. “Salt Lake City is an awesome place to create,” he says. “It’s crazy how much is going on here. The resources are incredible; SB Dance calls Rose Wagner our home. A lot of what we make is only possible because of that facility. But for something like this musical that has the potential to go to the next level, there is nobody in Utah to take it there. In terms of greater exposure this place is still isolated.”

Nonetheless, Brown predicts that “Revenge of Yoga the Musical” will have special appeal to people who read CATALYST. “Greta [editor and publisher] is not in there per se,” he says mischievously, “She’s disguised.” Hint: look for the hair. (This makes Greta very nervous.)