By the time Trent and I had been married three years, our relationship was in pretty bad shape. All the joy and fun we’d shared when we first tied the knot had somehow trickled away, and left behind were the giant piles of emotional baggage that, it turned out, we’d each been toting around.

By our fourth anniversary, things were dire and I was furious at the situation we found ourselves in. I already had one divorce under my belt from an ill-advised marriage when I was 22, and I’d be damned if I was going to let my relationship with Trent go down the tubes without, at the very least, understanding what was going on. But I was so angry I couldn’t even sleep in the same bed with him. I made myself a nest of cushions under the desk in my office, where I wallowed through my toxic emotions alone. 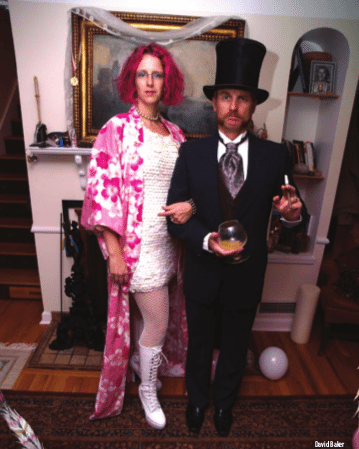 On the second day, Trent came and talked frankly with me, and owned up to his half of the problem. A week later we were in couples therapy. We were still angry at each other, but we were both committed to at the very least figuring out what had gone wrong. Eventually we got to the place where we were able to start trusting each other again, just a little bit.

By March, I realized I absolutely had to let go of my anger, or I would never be able to heal my relationship with my husband. The question I put to myself was, “What matters more: your identity as someone who’s suffered being wronged, or your possible future with a good person who turns out to be flawed just like everyone else?”

I let go of the anger. It felt pretty good.

A few months later, it was our fifth anniversary. We had really rebuilt our relationship to a place where we felt it was time to re-commit and celebrate it publicly. Since our original wedding we had moved to Salt Lake City and gained an entirely new circle of close friends. We thought it would be a great opportunity to create some fantastic memories with these people who meant so much to us. We decided to celebrate not just a half-decade anniversary, but an actual “re-wedding.”

At a big party we threw at our house, we held an open invite for any of our friends to “marry” us — to create a five-minute ceremony to help us celebrate our re-commitment to each other. Eight friends stepped forward, with everything from traditional sermonizing, to a string-winding ceremony, to a dynamic interpretive dance “blending of our chakras”! It was wonderful. At the end, Trent and I re-exchanged our vows, and kissed and hugged each other, and I cried.

Weddings aren’t just for the couple involved—they are for the entire community to celebrate. We were so happy to be able to involve our friends in our re-commitment ceremony, and five years later, as I write this on the weekend of our tenth anniversary, Trent and I are celebrating a relationship that is even stronger than it was that day.

Marriage is a matter of trust, priorities and community as much as it is about love, sex and intimacy. Everyone has baggage, and anyone can find herself on the rocks in a relationship. But with an open mind and a good heart (and a bit of professional guidance), you can sometimes find your way back to the safety of the deep channels. When that happens, don’t forget to celebrate with your friends.

Alice Toler is a writer and artist whose work appears regularly in CATALYST.

This article was originally published on April 30, 2015.