The Psychedelic Secrets of Santa

Major elements of the modern Christmas celebration are based upon the traditions surrounding the harvest and consumption of amanita muscaria, a mushroom considered sacred by ancient Lapplanders, and which also grows in Utah.

Although Christmas is commonly viewed as a Christian holiday, most of the symbols and icons we associate with Christmas celebrations are actually derived from the shamanistic traditions of pre-Christian northern European tribal peoples.

oSacred to these people was the red and white mushroom Amanita muscaria, also known as fly agaric. Commonly seen in books of fairy tales in association with magic and fairies, this mushroom contains potent hallucinogenic compounds once used by ancient peoples for insight and transcendental experiences. Major elements of the modern Christmas celebration—Santa Claus, Christmas trees, magical reindeer and the giving of gifts—are based upon traditions surrounding the harvest and consumption of this most sacred mushroom.

Ancient peoples, including the Lapps of modern-day Finland and the Koyak tribes of the central Russian steppes, believed in the idea of a world tree. The world tree was seen as a kind of cosmic axis onto which the planes of the universe are fixed. The roots of the world tree stretch down into the underworld, its trunk is the “middle earth” of everyday existence, and its branches reach upward into the heavenly realm. 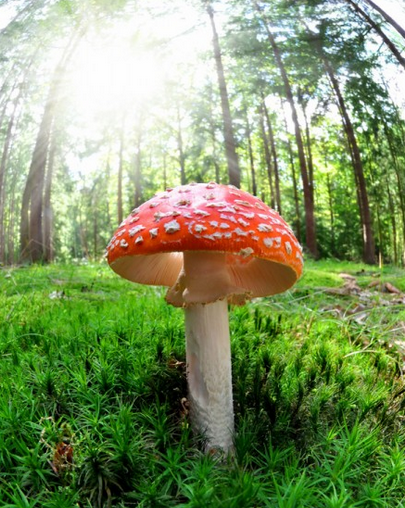 Amanita muscaria grows only under certain types of trees, mostly birch and evergreens. The cap of the mushroom is the fruit of the larger mycelium beneath the soil which exists in a symbiotic relationship with the roots of the tree. To ancient people, this mushroom was literally “the fruit of the tree.”

The North Star was also considered sacred, since all other stars in the sky revolved around its fixed point. They associated this “pole star” with the world tree and the central axis of the universe. The top of the world tree touched the North Star. The spirit of the shaman would climb the metaphorical tree, thereby passing into the realm of the gods—hence, the star on top of the modern Christmas tree, and also the reason that the super-shaman Santa makes his home at the North Pole.

The active ingredients of A. muscaria are not metabolized by the body, and so they remain active in the urine. In fact, it is safer to drink the urine of one who has consumed the mushroom than to eat the mushroom directly, as many of the toxic compounds are processed and eliminated on the first pass through the body.

It was common practice among ancient people to recycle the potent effects of the mushroom by drinking each other’s urine. The mushroom’s ingredients can remain potent even after six passes through the human body. It may seem odd to us now, but this urine-drinking activity preceded alcohol by thousands of years. 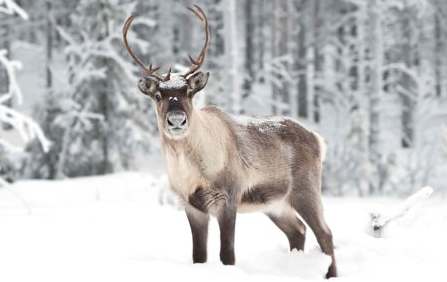 Reindeer were the sacred animals of these semi-nomadic people, since they provided food, shelter, clothing and other necessities. Reindeer are also fond of eating the mushroom; they will seek it out, then prance about while under its influence. Often the urine of tripped-out reindeer would be consumed for its psychedelic effects.

This effect goes the other way too, as reindeer also enjoy the urine of a human, especially one who has consumed the mushroom. In fact, reindeer will seek out human urine to drink, and some tribesmen carry sealskin containers of their own collected piss, which they use to attract stray reindeer back into the herd.

The effects of A. muscaria usually include sensations of size distortion and flying. Legends of shamanic journeys include stories of winged reindeer transporting their riders up to the highest branches of the world tree.

Although the modern image of Santa Claus was created at least in part by the advertising department of Coca-Cola, in truth his appearance, clothing, mannerisms and companions all mark him as the reincarnation of these ancient mushroom-gathering shamans. 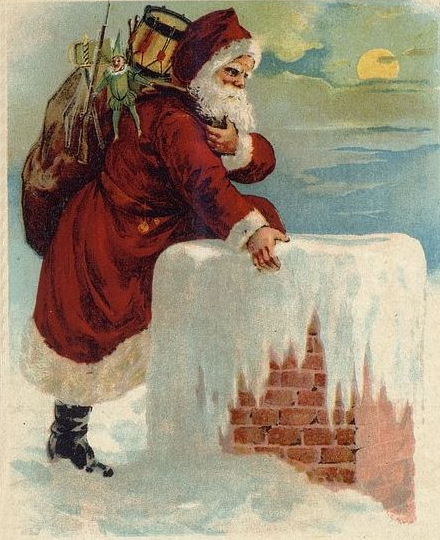 When it was time to go out and harvest the magical mushroom, the ancient shamans wore red and white fur-trimmed coats and long black boots. After gathering the mushroom from under the sacred trees where they appeared, the shamans would fill their sacks and return home. Climbing down the chimney-entrances of their yurt homes, they would share the mushroom’s gifts with those within.

The mushroom needs to be dried before being consumed; the drying process reduces the mushroom’s toxicity while increasing its potency. The ancient ones strung the mushrooms they gathered and hung them to dry by the hearth fire—an echo of the modern stringing of popcorn and other items?

The psychedelic journeys taken under the influence of a. muscaria were also symbolized by a stick reaching up through the smoke-hole in the top of the yurt. The smoke-hole was the portal where the spirit of the shaman exited the physical plane.

Santa’s famous magical journey, where his sleigh takes him around the whole planet in a single night, is developed from the “heavenly chariot,” used by the gods from whom Santa and other shamanic figures are descended. The chariot of Odin, Thor and even the Egyptian god Osiris is now known as the Big Dipper, which circles around the North Star in a 24-hour period.

Saint Nicholas is a legendary figure who supposedly lived during the fourth century. His cult spread quickly and Nicholas became the patron saint of many varied groups, including judges, pawnbrokers, criminals, merchants, sailors, bakers, travelers, the poor and children.

Most religious historians agree that the legend of St. Nicholas was a Christianized version of earlier Pagan gods. Nicholas’ legends were mainly created out of stories about the Teutonic god Hold Nickar, known as Poseidon to the Greeks. This powerful sea god was said to gallop through the sky during the winter solstice, granting boons to his worshippers below.

When the Catholic Church created the character of St. Nicholas, they took his name from “Nickar” and gave him Poseidon’s characteristics. Thousands of churches named in St. Nicholas’ honor were converted from temples to Poseidon and Hold Nickar. As the ancient pagan deities were demonized by the Christian church, Hold Nickar’s name also became associated with Satan (for whom, in fact, a jocular euphemism is “Old Nick”).

Local traditions were incorporated into the new Christian holidays to make them more acceptable to the new converts. To these early Christians, St. Nicholas became a sort of “super-shaman” who was overlaid upon their own shamanic cultural practices. Many images of St. Nicholas from these early times show him wearing red and white, or standing in front of a red background with white spots, the design of the mushroom.

Many people today have rejected Christmas as being too commercial, claiming that this ritual of giving is actually a celebration of materialism and greed. Yet the true spirit of this winter festival lies not in the exchange of plastic toys, but in celebrating a gift from the earth: the fruiting top of a magical mushroom, and the revelatory experiences it can provide.

Instead of perpetuating outdated and confusing holiday myths, it might be more fulfilling to return to the original spirit of these seasonal celebrations. How about getting back to basics and enjoying some real magic with your loved ones this holiday season? What better gift can a family share than a little piece of love and enlightenment?

Dana Larsen is a Canadian writer and drug policy reform activist. He is the author of “Hairy Pothead and the Marijuana Stone,” founder of the Vancouver Medicinal Cannabis Dispensary and director of End Prohibition—New Democrats Against the Drug War. www.DanaLarsen.com 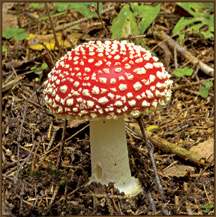 Amanita muscaria, commonly called fly-agaric, has a reputation in the U.S. for being one of those dangerous mushrooms—the kind that can kill you. A. muscaria’s extremely toxic relatives (the destroying angel and the death cap, for example) are responsible for that fear. This mushroom is likely to make you ill if you eat it raw. But in Russia, Italy and Japan, people consume a. muscaria as a culinary delicacy; it is even served in Japanese restaurants. The key: They boil and pickle it first.

Eating large doses of this mushroom culinarily, without proper preparation, account for the only recorded deaths, according to Erowid.org. The North American Mycological Association says no reliably reported deaths have occurred in the past 100 years; over 90% of mushroom deaths come from other amanitas.

And therein may lie the greatest danger in ingesting a. muscaria: Tom Volk, University of Wisconsin mycologist and professor of biology, says a. muscaria can be easily mistaken for Amanita pantherina and other Amanita species that are deadly poisonous.

In the U.S., a. muscaria is legal to possess because it does not contain psilocybin, although in Louisiana it is illegal to possess more than 40 of them “intended for human consumption.” Regarding its use as a psychedelic entheogen, muscaria is unlike the main psychoactive chemicals in psilocybin mushrooms, LSD, peyote and ayahuasca. Instead, muscaria contains both ibotenic acid and muscimol. Muscimol is the compound most directly related to the effects of the mushroom, and is both contained in the mushroom itself as well as created when the body metabolizes ibotenic acid. A. muscaria should be dried completely before use. The drying process helps convert much of the ibotenic acid into muscimol, reducing potential for toxic side effects (stomach cramps, gas, muscle twitching, trembling; convulsions are signs of something more serious). Dried of muscaria can be purchased online.

As a spiritual tool, longtime amanita cosmonaut James Arthur [who is not James Arthur Ray] writes, “The experience attained by the entheogenic [en (in) theo (God) gen (generative)] use of this mushroom is extremely valuable, yet the rules for experimentation of this type are unforgiving. Never eat any mushroom, unless you are absolutely certain that it is the one you want. Verify its identification with an expert mycologist. This is not a recreational experience. The Shamanic ‘death (and rebirth) experience’ is called that for a very good reason. It is what it is.”

While we are not aware of any North Americans who are connected with a culture that employs A. muscaria as an entheogen, it’s worth noting this is one potential sacred tool that grows literally under our feet, in the city and in the mountains. A. muscaria can be found wherever pine, spruce and fir—the Christmas trees—as well as birch and cedar trees, grow. It is also an image our culture is comfortable with: the dancing mushrooms in Walt Disney’s “Fantasia” are a. muscaria; as are the spotted mushrooms associated with fairies and gnomes in children’s picture books and which snuck into decoupaged craft projects across America in the 1960s. We see them as lawn ornaments, in comic books, and as chairs for Smurfs. This mushroom seems to be calling to us in our own language. It will be interesting to see what modern-day shamans will experience if they engage skillfully in the conversation.

For more indepth background on the role of amanita muscaria in the history and development of our culture:

“Santa and Those Reindeer” —excerpted from “The Physics of Christmas: From Aerodynamics of Reindeer to the Thermodaynamics of Turkey,” by Roger Highfield: christmaspast.info/stories/ realstory/hallucinogenic.html

“Who put the Fly Agaric into Christmas?,” Seventh International Mycological Congress, December 1999, Fungus of the Month

“The Physics of Christmas: From the Aerodynamics of Reindeer to the Thermodynamics of Turkey,” by Roger Highfield (1998: Little, Brown & Co.)

This article was originally published on November 30, 2009.