Downtown, 10:30pm, a Thursday night. I steer my bike into the parking lot of a popular small Salt Lake business and lean my ride up against a concrete wall. My posse of two pulls up behind me and does the same. Next to us is a blue dump­ster. City lamplight pours down on the bin. A family glides past on bikes glancing our way with a mixture of curiosity and concern. Cars drive by. I’m nervous at being so visible. But, there’s nothing illegal about what we are about to do, unless you consider going through someone’s trash trespassing.

Dumpster diving, picking food and necessities from other’s trash, is a firm element of anarchist culture. Groups such as Food Not Bombs use “food recovery” as a way to fight poverty, collecting excess food and putting it to use. Some anarchist groups participate in diving specifically in an attempt to act outside of the social system, avoiding the need to engage with money. There are those who do it for fun, playing along the edges of socially acceptable behavior. While others, often the homeless, participate out of genuine need.

The practice drifted into Salt Lake on anarchist tides from New York and Los Angeles around four years ago. At the time Matt Del Porto was a high school student growing up on the east side of Salt Lake. A kid trying to find his place in the world, Del Porto started making new friends outside of his neighborhood. He hung with punks, activists and artists. Soon, he learned about dumpster diving.

Since that time, Del Porto has become Salt Lake’s biggest diving advocate. Once a month, he leads hands-on workshops, guiding newbies around to his favorite bins. It’s an unthinkable practice in most cities. Good turf is a closely held secret among most of the world’s divers. But, in friendly Utah, sharing the best bins seems natural.

Curious to learn all I could before joining Del Porto on his rounds, I dug up an essay by Texas writer Lars Eighner. A quintessential text on the subject, On Dumpster Diving, Eighner authored the essay during a period of homelessness he experienced on the streets of Los Angeles in the 1980s. His writing reveals the ethos, habits, quirks and gritty or simply functional details behind diving. I was reassured by Eighner’s observation that “even respectable employed people will sometimes find something tempting sticking out of a Dumpster.” Maybe I wouldn’t be so out of place. But, Eighner clarified, being willing to eat from the dumpsters “separates the dilettanti from the professionals.”

The night of the ride arrives. I can tell immediately that Del Porto is, without a doubt, a professional. Young and bearded, a safety pin through one earlobe, wearing a t-shirt and cut off jeans, he looks like my idea of an anarchist dumpster diver. Pulling his bike up at our meeting spot I notice a crate strapped behind his saddle, filled with plastic bags and a backpack and a very bright flashlight. Seven of us have gathered for this late-night foray. The other newbies look young, maybe college freshmen. Four of the five are girls. They wear jeans and hoodies and have long, blond hair pulled back into ponytails. They all seem so normal. I secretly doubt these clean-cut college students will actually eat food from a dumpster.

Matt splits our large group up into two—increasing our stealth factor. One group takes the Sugar House loop. Myself, Del Porto and one other female diver follow the downtown loop, lured by the possibility of nuts, produce, fish and chocolate. We perform a slow pedal-by of our first dumpster after spying a group of cops. Diving isn’t technically illegal. But, some divers have been known to earn trespassing charges.

Parking our bikes at our first site, my new partner wrinkles her nose unconsciously as she peers into the dark container. I look down at my open clog shoes and nice pants. “By far the best way to go through a Dumpster is to lower yourself into it,” advises Eighner. Del Porto hasn’t read the essay, but he is a professional. I offer to hold the flashlight. Del Porto jumps in.

“I have found tons of dried fruit and boxes of cereal,” Del Porto had told me during a conversation the week prior. “An egg cracks in a carton and the store has to pitch the whole dozen. There are arbitrary expiration dates or something accidently gets left out of the fridge or frozen section. It thaws and they have to throw it away.”

Now, Del Porto is handing out loaves of French bread. He pulls up some miscellaneous fish parts and puts them into a bag. Hands them out, too. Tonight, we find lots of trash, only a little food. Sometimes there are other things: bike frames, computer parts, art supplies, shelving units, wood, furniture, clothing.

Sometimes, finding so many things can make a hoarder out of a diver. At the same time, as Eighner eloquently points out, divers understand better than anyone the transience of material and the abstract nature of value.

“Diving changed my attitude towards what is useful and what is not,” says Del Porto. “I pick up stuff on the ground and wonder if it has a use.” A bag of cat food, useless to Del Porto, becomes a gift to a friend and cat-owner. A huge score of bread gets divided among his friends.

Within half an hour we have scoured the entire bin and retrieved half a dozen loaves of bread, but not much more. Most of the waste re­mains neatly stacked in a corner of the dumpster. Larger pieces that we took out to make the job easier, we replace. Then, we close the bin lids. “Leave no trace,” says Del Porto proudly. “It’s not just a Boy Scout motto.”

For another hour and a half hours we search the depths of two more bins. Our final dive reveals a box full of under-ripe tomatoes and another of wilted lettuce and flatleaf Italian parsley. Around mid-night we call it quits and pedal back to Del Porto’s house, the rendezvous point.

The other divers arrive and we begin the ritual of dividing the spoils. All of our finds go on the kitchen counters. There are: burritos, salsas, mini-cheesecakes, cheeses, tons of bread, a bunch of chard, celery, to­ma­toes, strawberries, apples, bananas.

Looking over our stash with supermarket eyes I find the apples small and bruised, the bananas under-ripe, the strawberries verging on slimy. Two of the girls grab the red fruit excitedly making plans for smoothies.

The newbies filling Del Porto’s kitchen go about the work with vigor. Quickly, they claim the prepared foods. The containers, still covered with mystery juice from the bottom of the various dumpsters, get washed in the sink. Finally convinced that these kids indeed intend to eat the food, I can’t hold myself back from the big question: why.

“I’m in school and I’m out here on my own,” offers up the soft-faced, curly-haired boy.

I push him little more. Does it have anything to do with the current economy? “Yeah, I guess,” he says, thinking. “Since the recession, my parents haven’t had enough money to help me much.”

Riding away from the house a little later, I contemplate my shopping trip. Balanced on my handlebars are two grocery bags of tomatoes I plan on canning in the morning. There is some wilted chard that will end up in my compost after sitting in the fridge for another week. The crusty bread will go to the chickens. It has been the longest and least successful shopping trip of my life. I am exhausted.

In a way, I am grateful to those who chose to reclaim discarded food. It’s recycling at its most extreme. And, while I didn’t see too much needless dumping in Salt Lake’s bins, there is no good reason that any food should go to waste. But, reflecting on my night and the ample grocery money in my bank account, I decide to leave dumpster diving to the professionals, whether they be anarchists, artists or college students.

Diving in Salt Lake City is quasi-legal. There are no laws that specifically address dumpster diving or trash picking, but dumpsters are often located on private property and dumpster divers can be cited for trespassing. Successful diving walks the line between stealth and politeness. Certainly a trash picker who isn’t noticed by anyone—and who always leaves the dumpster in a good condition and doesn’t spread trash around the area—isn’t going to get in trouble. On the other hand, one successful dumpster diver wrote online that he always wears a grey suit coat and a nice shirt when he goes trash picking, and if there are people around from the business he’ll ask permission before lifting anything out of the bin.

Layton and Orem have specifically outlawed dumpster diving. These laws were passed in 2005 and were intended to address identity theft issues, but they apply to all trash picking without permission of the business. Provo’s laws are less clear, but the police when asked informally stated that unless there’s a “no trespassing” sign up they will probably just ask you to move along. BYU campus police do not tolerate dumpster diving, as they equate it with stealing.

Construction site dumpsters are often good resources for scavenging building materials. If you ask the site foreman, you may also be able to scavenge materials like paint and drywall compound if they are going spare at the end of a project.
As anyone who watches TV crimes shows knows, police detectives and private investigators also go through people’s garbage when looking for information about a case. Some private investigation companies specialize in “trash hits.” Even in areas where dumpster diving has been made illegal, the police are still allowed to sift through trash. 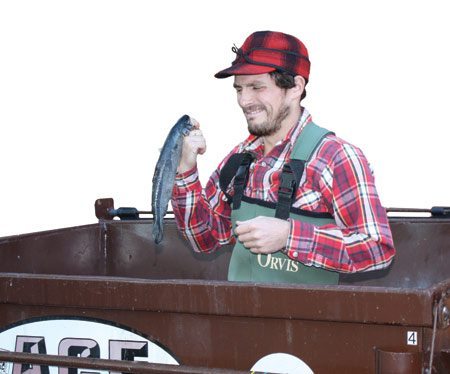 Photos by Pax RasmussenBusinesses occasionally try to discourage dumpster diving by pouring laundry detergent or bleach over discarded waste in their trash bins. Prospective trash pickers should be aware of this practice.

The film Dive! is a documentary made by Jeremy Seifert in 2010, which addresses the culture of waste in the United States. It follows a group of dumpster divers around Los Angeles as they retrieve perfectly edible food and other useful items from trash bins all over the city. In a much-quoted statistic, 96 billion tons of food is sent to the landfill every year in America. The film provoked a fair bit of response and has done a good job of making people think more deeply about the current system where surpluses are generated just to be discarded, and people on the street are still going hungry.

And, oddly enough, dumpster diving has become fashionable lately. There are web resource sites all over the Internet that provide tips and tricks to would-be divers, and frugal-living people from Brooklyn to Minneapolis can find local knowledge at their fingertips. Utah State University even sponsors a fashion show put on by students who create outfits from completely recyclable or recycled materials.

This article was originally published on December 27, 2012.