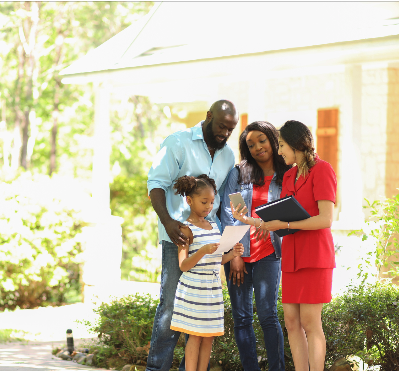 Editor’s note: Social and environmental justice is not a new topic, but it is gaining exposure since the COVID-19 pandemic and Black Lives Matter. This article is the second of a three-part series—see the September CATALYST for Daniel Mendoza’s brief overview. Here, we discuss the practice of redlining, which was outlawed with the Fair Housing Act of 1968. The Early Winter CATALYST will discuss in greater detail what’s happened in the aftermath of these laws.

Following a well-known line in real estate, environmental justice can be described in three words: location, location, location. The practice that has led to disparities in population distribution along the lines of race and wealth is called redlining. Wikipedia tells us that “In the United States and Canada, redlining is the systematic denial of various services by federal government agencies, local governments as well as the private sector either directly or through the selective raising of prices.”

What does this mean and how did this work in practice? As part of Franklin D. Roosevelt’s New Deal, the Home Owners’ Loan Corporation (HOLC) was instituted in 1933 to rescue struggling banks and mortgage holders. Maps, created for communities  of more than 40,000 residents, outlined neighborhoods deemed suitable for mortgages, and those considered poor investments. This was an important development, particularly at that time while the economy was recovering from the Great Depression.

Neighborhoods were given a letter grade from A (Best), B (Still Desirable), C (Definitely Declining) and D (Hazardous) taking into consideration such factors as the age and upkeep of the housing stock, the prospect of rent, the proximity or encroachment of commercial and industrial facilities, and neighborhood amenities such as parks. During the development of these categories in Salt Lake City, officials also took into consideration an area called the “Smoke Zone.” Generally speaking, lower income and minority populations were living in “C” and “D”-zoned neighborhoods, while higher income and lower minority population groups lived in “A” and “B” neighborhoods. 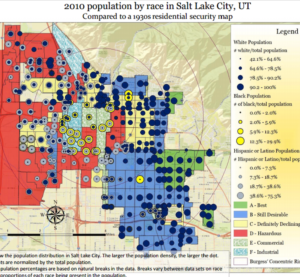 The financial impact of classifying neighborhoods in this manner was, at least, twofold. The first repercussion was that lenders would offer mortgage options in the most desirable areas primarily (and often exclusively) to majority (white) population members. In a similar manner, minority populations would only be offered mortgage options in the least desirable areas.

Using statistics from the last official U.S. Census (2010), Weber State University graduate student Amanda Cooley conducted a spatial analysis on how Salt Lake City’s population  is still impacted by policies started in 1930 (see chart). Her work makes it abundantly clear that the most desirable land tracts (green and light blue shaded areas in the map) have consistently been inhabited by predominantly white residents (dark blue circles—the size of the circle being proportional to white population) and the least desirable areas (light yellow and red shaded areas in the map) are home to Black and Hispanic residents (bright yellow circles represent Black population and light purple circles represent Hispanic—the size of the circle being proportional to minority population).

The center of the map is Temple Square. The West side is mainly graded “D” (hazardous) and “C” (definitely declining) compared to the East side, which is predominantly “A” (best) and “B” (still desirable). Also notable is that commercial land is mainly in the central part of the city and industrial land is on West side—and these two land-use types have the highest minority population concentrations.

Trees: a mark of wealth

Much research has focused on the land use differences across cities. An often-used comparison is tree cover versus sociodemographic factors. Tree cover offers multiple benefits, but these benefits come at a cost, which generally only wealthier populations can afford. Among the benefits are beautification, temperature regulation (a recent study shows that areas around Liberty Park and Sugar House Park can be up to three degrees cooler in the summer), and cleaner air (both from higher levels of oxygen and particle filtration).

Trees require regular care. The presence of trees also means that real estate will not be used to house people or commercial entities, thus increasing the cost per square foot of land. Therefore, it comes as no surprise that multiple studies show higher tree cover rates are associated with higher income and lower minority population.

As Utahns are reminded every winter, PM2.5 (tiny particulate matter, 2.5 microns) has many negative health impacts, ranging from pulmonary and cardiovascular to even mental health. A recent study has found that increasing built cover (anything that is human-made such as roads, homes, buildings) is associated with higher pollutant concentrations. This makes sense because the built environment will generate emissions through either vehicular traffic or other building activity.

The same study also found a relationship between household poverty and PM2.5 concentrations. However, it is less straightforward. This is because some wealthy community members live in the central parts of Salt Lake County which have high levels of pollution. Similarly, some low-income communities reside in the outer fringes of the county which have comparatively cleaner air.

This article is by no means a comprehensive description of redlining and the history of housing discrimination and readers are encouraged to research on their own from many of the available sources. However, our intention was to showcase how 1930s policies have shaped our community and how their effects are still felt in the present. Until next time!