Providing relief from this terrible circumstance, the INN Between began providing hospice services to the homeless last year. Kim Correa, the nonprofit’s treasurer and executive director, gave CATALYST a tour of their facility, which occupies the old Guadelupe School on Goshen Street west of downtown, and talked with us about their operations. 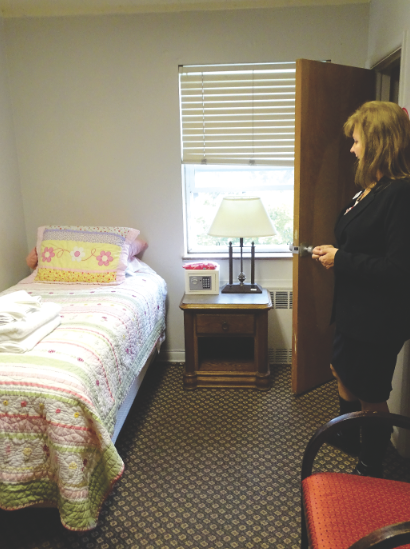 “Debbie Thorpe [board chair and a palliative care nurse practitioner at Rocky Mountain Hospice] had the idea to start this, and she kept assembling committees of people to work on it. I joined in late 2012, and a small group of us developed the first program, which was a referral line. Hospitals would call us if they had a homeless patient who needed hospice, and we would get a bed donated in a skilled nursing facility.”

Right around that time, the group found out about the Guadelupe School location and started work to procure it, which they succeeded in doing in early 2015. There are two buildings, the school building and the former convent, with the current residents being housed in the convent because the school building needs $1 million to $1.5 million worth of code upgrades. “Hospice is a medical service but it’s delivered in the home,” Kim says, “so if you’re homeless, you don’t get access to that, and that’s a big social injustice because we’re all as Americans guaranteed that right through Medicare and Medicaid.”

The INN Between has had 66 residents so far, and has helped 13 terminal patients die in comfort. Only one other comparable program exists in the nation, Welcome Home in Chattanooga, Tennessee. Many local businesses and charities coordinate with the INN Between, including the Habitat For Humanity ReStore, Deseret Industries, the Utah Food Bank, the Eagle Scouts, and various church groups and landscapers.

Kim shows us around the property, which includes a vegetable garden, a memorial garden, a music room, a massage room, a communal dining room and a TV room. The residents’ rooms are basic but pleasant.

“We wipe the slate clean when they come here,” Kim tells me. “We had one woman who wasn’t terminal—she was here from out of town for breast cancer treatments, but since she had a criminal record nobody would house her. She was sleeping in her car with her son. We don’t care about your history—we only ask that you follow house rules, including no drugs or alcohol.”

Indeed, not every resident admitted to the program actually dies. Sometimes just having a stable environment and proper medical care can bring someone back from death’s door. “We have two ‘miracles,’ we call them,” Kim tells me. “They each had two weeks to live, and one actually coded, but they got back on their feet and were discharged from the program and are still living.” 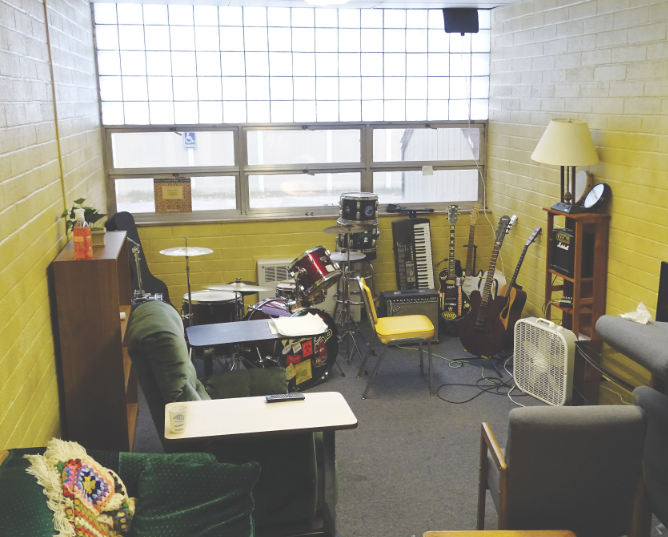 The INN Between is a supportive group home environment. As a residential facility, not a medical facility, the operating costs are much lower. Providing hospice to terminally ill homeless also saves money for the community at large: “Once they come here, they stop calling 911,” Kim says. “Every 911 call is about $1,600 for the emergency response, another $1,000 for an ambulance ride, and an overnight in the hospital is usually $2,000-$3,000. For every person we have here, if we can prevent just one 911 call, we can save a lot of money for the community.”

INN Between residents are well cared for with supportive methodologies as well. “We have a Reiki group that comes in, a massage therapy group, acupuncture, grief counselors, AA and NA meetings, and we also have music therapy.” Kim shows me a room full of musical instruments. “All this stuff was donated!” The generosity shown to the INN Between is truly impressive, and it’s heartwarming to know that they are providing such an important service.

Dealing with terminal illness is harrowing enough; to have to die on the streets is inhumane. This organization is on the vanguard of a desperately needed evolution in our compassion. I hope that other cities are paying attention.

This article was originally published on November 1, 2016.