The Herbalist is In: Spices

Transmute the longing for summer herbs with pungent flavors. 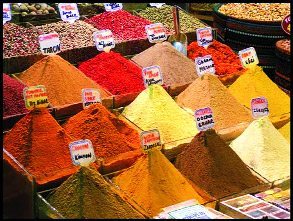 Now that my garden is covered with snow, I miss my fresh garden herbs and their fragrance and flavor. Can you suggest any herbs that I can use this time of year to perk up my senses?

Rather than longing for the fresh, leafy, summertime herbs, think spices, those pungent, aromatic herbs from far away places. Arabs introduced them to the Romans and went so far as to make up fantastic stories of their origins to keep their sources hidden. Even after finally admitting that cinnamon came from a tree, they reported that the tree was on an island in the middle of a lake guarded by griffin vultures that would attack and eat anyone who came near.

Remember your history lessons on European explorers and the Spice Islands? The Spice Islands, or Moluccas, encompass most of the Indonesian islands, also called the East Indies. The Portugese opened up a sea trade route in 1498, creating new access to the spice trade; the previous route traveled through Africa and Constantinople to Venice. That city held the European monopoly on spices.

Wars were fought over the spices that grew only in the warm, humid air of the tropics. Spices were so valuable, they were kept under lock and key in the kitchen of those lucky or rich enough to acquire them. The Dutch, who colonized the East Indies, kept prices inflated for nearly 200 years by restricting the cultivation of some spices. It was not until some plants were smuggled out to the West Indies in the late 18th century that prices finally fell.

What is a spice? Think exotic seeds, bark, nuts, and tubers like nutmeg, allspice, star anise, cardamom, coriander, cinnamon, cumin, pepper, cloves, ginger, saffron and vanilla. Other spices such as mustard and chili were also discovered in far-off places,  then brought back to Europe and successfully cultivated in colder climates. If you have ever grown cilantro in your garden and allowed it to go to seed, those sweet, fragrant seeds are coriander.

Here’s some interesting information about a few spices:

Pepper is one of the first and most desirable spices to be traded. Both black and white pepper grow on a vine. Black pepper is the entire peppercorn or berry; white pepper results when the berry is soaked and the hull stripped off. White pepper is a milder in flavor than black.

Vanilla actually comes from the tropical forests of the Americas and was introduced to the Spaniards by the Aztecs who used it to flavor their chocolate. Pods grow from a vine and are not harvested until their third year. The pods are picked and cured by alternately being sweetened and dried.

Vanilla beans are expensive but can be reused many times to flavor recipes. Boil a pod in milk to flavor it. Then rinse it off, dry it and store in an airtight container for future use.

Buy only real, pure vanilla extract. You don’t even want to know what goes into the artificially flavored one. If you travel, beware of large bottles offered at a steal of a price. It is probably not the real thing.

Curry powder is a blend of ground spices, usually containing some or all of the following:  turmeric, ginger, clove, cinnamon, cardamom, fenugreek, cumin, cayenne, mustard and coriander. In India, household cooks take great pride in their unique recipes handed down from relatives.

Curry is fun to play with. Making your own is a great way to study the individual spices, learn how they complement each other and how proper cooking captures their best flavor. Often a curry spice recipe requires quick roasting of some ingredients in a hot skillet which releases more aroma and taste. If making curry powder is too time-consuming, choose several kinds from different manufacturers in the store and have a taste test to see which you prefer.

Saffron is the world’s most expensive spice. It takes 250,000 stigmas from 76,000 blue-violet crocus flowers (Crocus sativa) to make a pound. Because of its cost, saffron is often adulterated. In 15th century Germany, people were burned at the stake for doing just that.

Buy the dry threads in small amounts. Known for adding color to foods and also used as dye, saffron’s flavor is subtle but distinctive. It is used in many rice dishes such as paella and is an essential ingredient in bouillabaisse.

Nutmeg and mace come from the fruit of a tree a bit like an apricot in form. When ripe, the fruits are shaken down into baskets and spread to dry in the sun. The outer fleshy peel is removed from the nut; this is mace which has a very strong, nutmeggy flavor. When the nuts are dry enough to hear the kernel rattle inside, the shell is broken to release the nutmeg inside which is then graded for quality.

Buy and keep nutmeg whole and use a fine grater to get the amount you need. The sweet, nutty, spicy flavor is useful in baked goods, fish, eggs, mulled wines and dairy drinks, spiced puddings and more.

Easy ways to include spicy flavorings to your food:

Add curry powder to vegetables in broth or sauteed chicken for a welcome, distinctive change of taste.
Bake sugar cookies or shortbread with anise, coriander or cardamom added.
Add poppy seeds to breads, buns and biscuits.
Stew dried or fresh fruit with cinnamon, allspice and cloves.
Add ground, cumin, coriander and green chilis to a chili or lentil soup recipe.
Vanilla custard is real comfort food.
Add candied or crystallized ginger to a granola recipe.
Crush a few strands of saffron and add to a creamy vegetable or fish soup or rice.

Though we think of delectable flavors when we think of spices, many have significant therapeutic value. Turmeric is liver protective and an important herbal anti-inflammatory. Ginger and hot chilies offer varying degrees of vasodilation that can stimulate blood flow to the extremities and mucous membranes. Fenugreek seeds are used as a poultice for boils and may help lower cholesterol. Studies on cinnamon suggest that it helps with sugar metabolism in the body, and cardamom and anise have soothing digestive effects.

So rather than long for what is past, indulge yourself in the new possibilities of more exotic, less familiar herbs and spices, and delight in your new fragrant, culinary herbal adventures.