The Herbalist Is In: Smudge

Smoking away the blues. 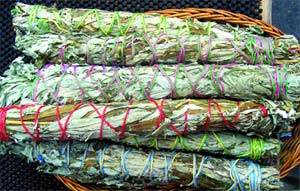 At a solstice ceremony I attended, the facilitator used a “smudge.” Can you explain what it is and why people
use it?

Mmmmmm, the fragrant smoke of smoldering, aromatic herbs is a wonderful way to use plants. Smudging, like incense, infuses the air around a person, object, space or ritual with a particular scent. In some cultures, the smoke is thought to bathe the person or item to purify them or help shift energy in a positive way. There are many kinds and methods of smudge, but in general, the burning of fragrant plant materials clears energy, carries prayers and blessings and begins or brings a situation to a close.

You did not say what the smudge was made of, but I suspect it may have been sage or sweetgrass. Both are commonly used.
Sweetgrass, with a vanilla-like or new-mown hay scent, is a long grass that grows in northern climates. You will usually find it sold in green braids about two feet long. The grass stalks are braided while still growing from the ground and then cut at ground level.

Sage comes in “sticks” or bundles of the leafy twigs wrapped together. Sage is a common name for plants in the genuses Artemesia and Salvia. There are many kinds of sage: garden, sagebrush and my favorite, the lovely white sage which comes from a majestic plant that grows on hillsides in areas of the southwest desert. If possible, grow your own to avoid possibility of overharvesting, which is said to have occurred in some California hillsides.

Cedar is also burned, most commonly the flat leaf cedar of the northwest. However, there is no reason other cedar species cannot be used. They all have distinct fragrance differences. Once you compare them, you might understand why the flat leaf is preferred, for it is particularly pleasing. Juniper is used in a similar fashion.

Sweetgrass, sage and cedar are often found in the Native American traditions. In your garden, you can grow other fragrant plants for smudge, such as rosemary and lavender.

Another kind of smudge is the sap or resin of certain trees. Frankincense comes from trees in Africa and the Middle East. The reputation and history of frankincense stays with us in Bible stories and religious ceremonies. Whenever I smell it, I imagine the ancient historical and religious settings it has been used in. Recent news warns that the frankincense trees not chopped down to make room for farms are being killed by foraging wild goats that climb up into the branches and eat the twigs and bark.

Copal is from a tree in Mexico (Bursera odorata). The word comes from the Nahuatl word copalli which means incense. White copal is more expensive than the yellow.

I like our native pinyon and juniper sap for smudging. Somehow, using local plants or those that I have grown and harvested myself makes smudging, and the intention that goes along with it, more meaningful to me.

To use a smudge stick, light one end of it. Allowing it to smolder produces the most smoke. Saps and resins require a different method. Bits of the material must be dropped onto hot coals to release a burst of fragrant smoke. Small circular charcoal bricks in foil packages are made for this purpose. Hold the charcoal in your finger tips and light the edge. The charcoal sizzles and sputters a bit; place it on a bed of sand in a heatproof container (some people use shells) and wait until it is gray and glowing just as you would before grilling on the barbeque.

In Mexico, I attended a reenactment of a Mayan ceremony.  People stood throughout the lush jungle, each holding a large goblet of coals. Simultaneously, they dropped in much more copal resin than I have ever seen used. The entire jungle filled with the fragrant fog of the smoke, enveloping all of us. It was so dense, rich and pleasing that I felt disoriented, and I believe in that moment I came to learn the transformative power of smudge.

In general, smudge is used for purification. Different plants have different purposes depending on the culture that values them. I like to use sage for clearing and grounding and sweetgrass to add sweetness or positive energy. Cedar has a pleasing brightness to its smell which cheers me. I like to use pinyon resin to clear negative energy, for example, when there has been an argument in the home or someone is moving into a new house. Lavender is known to have calming effects. I remember being taught to put mugwort by my bedside to increase dreams. Therefore, I would use the smudge of the plant to deepen awareness and possibly bring more dreams. Reading books and observing ceremonies can help you learn more about traditional uses of smudge, but I believe the most important thing is your connection to the plant and what you feel it does for you.