The marriage of masculine and feminine.
by Jon Scheffres 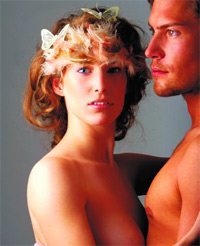 Does anyone out there still remember "Free to Be You and Me," Marlo Thomas' tribute to the idea of gender as a social construct? This was a very popular idea that took hold of the public imagination in the '70s and still persists in some circles among psychologists and social scientists. Simplistically speaking, the idea is this: We make boys more boylike and girls more girllike by steering them toward certain activities and by treating them differently. So if you give boys dolls to cuddle and girls trucks to play with, you'll get a generation of men who are more in touch with their feelings, more inclined to stay at home and raise children, and a generation of women who want to run corporations.

While it is true that many men and women are now challenging traditional gender roles, there is still plenty of evidence to suggest that males and females are fundamentally different: You put a doll in the average boy's hands (no matter how sensitive you've raised him to be) and he's likely to use it to play a game of "smash-up" with the other dolls lying on the floor-or he'll systematically dismember the doll to see how all the pieces fit together. You give the average girl a truck and she may show momentary interest, but eventually she'll join the other girls in playing something that stresses cooperation and relationship-building.

For me, "Free to Be You and Me" is still a powerfully evocative idea. I was raised on it and it tends to serve as a philosophical ballast for my post-modern psyche. Much of the work that I do with clients aims to help them experience themselves as they are, apart from societal or family conditioning. Yet the issue of gender adds a new dimension to the exploration of individual identity and freedom. When it comes to gender, how unique are we? How much of our behavior is biologically programmed? How free are we to choose the way we choose "to be"?

A good deal of scientific research demonstrates that males and females are not only different on the outside, we're different on the inside as well, and that biology does play an important role in the evolution of gender traits. Specifically, our brains and nervous systems have evolved differently to specialize in certain kinds of tasks and information processing. Just to name one difference detailed in "The Female Brain," Louann Brizendine's review of some of the more noteworthy science on this topic: Testosterone surges during the in-utero experience of the male fetus actually shrink the centers of the brain which facilitate communication and the processing of emotion. As a result, boys are less sensitive than girls to emotional cues coming from facial expression and tone of voice, and they tend to lag behind girls in language skills until adolescence.

Sex differences in the brain's "hard wiring" and in nervous system functioning form the basis for what we refer to as masculinity and femininity. The traits of masculinity and femininity can be described in general terms. How does our understanding of these essential differences help us to understand ourselves? How do we know when we are using this information wisely-to help people grow and change-and when we are simply reinforcing old and stifling notions of what men and women "should" be?

The words "masculine" and "feminine" do not equate to "male" and "female". The word "gender" does not equate to "sex." Each of us has a mixture of the feminine and the masculine. These are energies which do not define one's sex or even one's sexual orientation. As an example, a man may have a more feminine presentation or way of operating in the world and still identify himself as male and heterosexual. A woman may have a preponderance of masculine energy and still feel herself to be a woman who is sexually attracted to men. Similarly, there are men who operate at the "macho" end of the masculine spectrum who are gay or bisexual and women who are tantalizingly feminine, soft-and lesbian. Sex, strictly speaking, is defined by hormones and anatomy. Sexual orientation is only one aspect of a person's sexuality which appears to be governed by a multiplicity of factors, including biology, stage of life, imagination, opportunity and conditioning. Gender, I think, is defined by the relationship between the masculine and feminine energies within the individual. While there are only two sexes there are many variations on gender and sexuality. Gender and sexuality, in effect, describe our psychology.

The writer and lecturer David Deida asserts that people tend to live closer to one end of the gender spectrum or the other. He refers to this as one's sexual essence. By and large, sexual essence (or gender) does seem to correlate to one's sex, as most men have a predominantly masculine psychology and most women have a predominantly feminine psychology. Knowing whether your sexual essence is masculine or feminine is central in his view to cultivating and maintaining passion in love relationships. For the purposes of this series of articles, I will discuss masculinity and femininity as they come into play in the context of most heterosexual relationships. However, feel free to apply an understanding of these ideas to your unique situation and constitution.

According to Deida, the hallmark of the masculine is directionality. By this he means that the healthy masculine urge is to choose direction (i.e., "This is what I want and why I want it") and then to move toward the goal or object of desire. The masculine chooses – and then takes action.

As a couples therapist, I often hear women complaining that their men lose directionality after the initial romance of the relationship is over. For example, she is the one who consistently chooses what to do on date night; or he only shows interest in her when he is horny. To add insult to injury, he is very clear about what he wants when it comes to his own interests and ambitions. He has no problem, for example, staking out his claim to go hunting with his friends every elk season, or he may insist on going alone to a meditation retreat twice a year.

To make things even more complicated, many men have become confused about their masculinity. In an attempt to be more emotionally available and responsive to their female partners, they have given up or failed to develop a capacity for self-assertion that helps drive the sexual chemistry of the relationship. The poet and men's movement guru Robert Bly bemoans a tendency he sees in contemporary men to eschew their own masculine energies, mimicking feminine sensitivity or simply going numb to their own feelings and desires. There is a lack of energy in these men, he argues, and they leave the women in their lives to try to fill the void. Bly refers to this phenomenon as the "soft male": Disavowing any pretense to male dominance, he may look more relational than his macho counterpart, but in reality he lacks a presence and involvement that most women crave from their partners.

The woman connected to this man ends up feeling neglected as he seems to consistently turn away from her, preoccupied with his own inner growth and development. More than anything she wants him to be assertive, aggressive even, about his desire to be with her, wants his full attention when they are together and to know she is on his mind when they are apart. A friend of mine, with more than a hint of irony in her voice, once put it to me this way: "When we started asking men to be sensitive to feelings, we meant our feelings." Many women in my therapy practice feel deeply frustrated. They seem to be searching for the activation of the masculine in their partners-so they may settle freely into and luxuriate in their feminine nature.

What is the feminine? In "The Power of Myth" Joseph Campbell calls her the "vehicle of life." Referred to in various spiritual traditions as the Shechinah or the Adi Shakti, the feminine is the field of play, the space in which consciousness unfolds. Her role is to contain, nurture, and grow the seed of life into maturation. If the masculine tends to move in linear fashion towards a goal, the feminine's tendency is to open and close, receiving that which pleases her and shutting out that which does not. Ultimately, she decides what comes into being and what is allowed to remain dormant, undeveloped. Like the moon, she has cycles of light and dark, at times reflecting the sun's energy, and at other times shunning his advances, creating the impression of a void. And yet, according to Deida, the hallmark of the feminine is radiance. She wants to be noticed for her special and unique beauty. More than just being noticed she wishes to be loved and desired, completely and without reservation. She yearns for a partner who can penetrate (emotionally, sexually, spiritually) to the essence of her radiance and then dissolve within it. In this regard, the greatest desire of the feminine is to be entered and filled up while the greatest desire of the masculine is to penetrate and be received.

Further, if the masculine is identified with the rational, analytical mind, the feminine is identified with non-rational, non-linear thinking, with dreaming and free association. While the masculine tends to encapsulate and contain emotion, the feminine gives freer license to her feelings. Like nature itself, she may be stormy or calm, given to outbursts and rages but also capable of great tenderness and love. She also thrives on relationship. Relationships for the masculine are often based on utility or a shared sense of purpose and mission, but for the feminine relationships are a heart-centered matter, ends in themselves, more central to the flow of life.

Talking about the feminine is problematic because over the last two to three thousand years she has been relegated to a secondary, subservient position. Indeed, the devaluing of the feminine and the oppression of women are related phenomenon in the history of the world, and in order to remedy the latter, the former must be understood and addressed.

Jon Scheffres (Guruprasad Singh), MA, LPC is a psychotherapist, lecturer, and a KRI-certified kundalini yoga teacher.  Email him at jon@lifecounselingandyoga.com.