The Earth Has a Soul

It’s easy these days to give in to despair when you let yourself consider the future of our species on planet Earth. All the extra carbon that Gaia so carefully locked away deep in her crust as life was evolving is being extracted and flung into the atmosphere willy nilly, to wreak havoc on our climate and biosphere for generations to come. We have lost touch with our ancestral selves; our children think that food is something that comes wrapped in plastic, not something you pick off a plant or raise in a henhouse.

Yet, wilderness is still incredibly important to us—both as a place to restore ourselves from the dislocation and overwork of modern life, and as a reference and a resource to give us direction away from our self-destructive path. On October 10 this year, a group of professionals, students and academics gathered at the Utah Natural History Museum for a conference on ecopsy­­chology to ask this question: How do we let the wilderness back into our souls?

Sponsored by Paula and Sumner Swaner of the Swaner Foundation, the conference began with local photographer Stephen Trimble’s presentation of the Utah Wilder­ness 50 photography exhibition, which was juried this year in honor of the 50th anniversary of the Wilderness Act of 1964. Selected from over 1,400 entries, the 50 winners are on display on the top floor of UMNH. “Wherever we live in Utah, we are lucky,” Trimble said, “wilderness lives just over the backyard fence.” 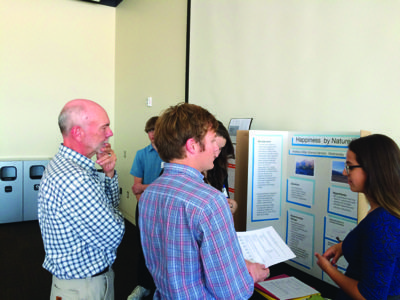 Practicing ecotherapist Patricia Hasbach spoke about biophilia—a fundamental, genetically based human need and propensity to affiliate with life and its processes. Animal therapy, where people learn from and are comforted by interactions with domestic animals, is a subset of ecotherapy, and is an example of human biophilia. She also talked about “rewilding,” the process of re-engaging our relationship with the rest of Earth’s living biosphere. It is particularly important, Dr. Hasbach says, to develop the words to describe these very important experiences and concepts. “If we don’t have a language for nature, it’s ignored in decision and policy making.”

Adrienne Cachelin, whose research is centered on education for sustainability, developed this concept further. “Knowledge does not necessarily equal action,” she says. “How do we empower people to act?” Partially, it’s in the way we use our words. “Consider the difference between taxes as a ‘burden’ and taxes as a ‘membership fee’ for the privilege of being part of our amazing nation!” she says. We discuss nature as if we are separate from it. Wilderness needs to be “managed,” “controlled” or “exploited” or used as a “service.” If, instead, we speak and write about nature as a system within which we are embedded, we get a way better fundamental understanding of our situation.

The first day of the conference ended with a dialogue led by representatives from local American Indian tribes. The conceptual split between ourselves and nature doesn’t exist in these native cultures.

The second day of the conference featured ecologist Nalini Nadkarni, a two-time TED speaker who told of her experience bringing a moss-regeneration project to prison inmates, and the subsequent decrease in reported violence among those inmates, just from that bit of contact with something living. Biophilia in action! Experimental psychologist Oakley Gordon talked about the native wisdom of Andean cultures, where the sensation of loving the Earth is a two-way conscious connection. We love the Earth, and the Earth loves us back. Dr. David Strayer, a cognitive researcher, discussed the psychological effects that advancing technology is having on our ability to communicate with and understand one another. Digital natives in the younger generations don’t pick up on facial cues that signify emotions as well as older people do. We shouldn’t throw away our iPads, but we should be aware of how we are using them!

Dr. Hasbach had conference attendees do an exercise where they considered the future under climate change. A large part of the problem we have as a species in engaging this issue is that we have been raised to be short-term thinkers. We consider the effect of our actions during the next three months or couple of years, not the next 80 years or two centuries. Thinking these thoughts is unsettling. But looking around the room at all the intelligent, compassionate, hardworking, focused people gathered to find ways to heal our relationship with the wider systems of the planet, it seems like we really do have a reason to hope for better.