For over 40 years, Salt Lake Acting Company has “bought local” when it comes to supporting talent; one grateful playwright speaks out for local artistic “farming.” 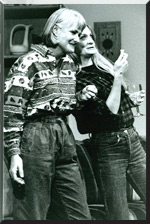 Not long after facial hair had found me and I had found writing-for-the-theater, I said a stupid thing. Smudged almost imperceptibly with early success, I was a bit full of myself—sitting on the stage of the August Wilson Theater in New York with a half-dozen others who constituted a panel giving advice to regional theater directors and managers. The question asked of the panel to which I responded stupidly was: “Where do we find the playwrights?” Feet cartwheeling toward my mouth, I leapt in.

Not long after facial hair had found me and I had found writing-for-the-theater, I said a stupid thing. Smudged almost imperceptibly with early success, I was a bit full of myself—sitting on the stage of the August Wilson Theater in New York with a half-dozen others who constituted a panel giving advice to regional theater directors and managers. The question asked of the panel to which I responded stupidly was: “Where do we find the playwrights?” Feet cartwheeling toward my mouth, I leapt in.

Essentially, I began reeling off a list of New York dramatic agents, all of whom—I assured the questioner —would represent any number of “hot” young and new American playwrights.

Somewhere in the middle of my agent-list another member of the panel broke in. It was Bob McBeth who ran a Black theater company in Harlem. Intercepting my answer gently but with clear authority, he said he begged to differ and asked the questioner where he was from.

My memory is that the questioner named a town in South Carolina. “Okay,” McBeth said, “Here’s what you do…to find yourself a playwright. What you do is: You go down to your local grange and you ask them, ‘You got anybody writing any kinds of shows for you? You know—entertainments?’ Chances are, they do. So you get the name of someone… and you find someone… and you tell him or her that you’ve got a theater and might someone have a play that might be performed on your theater stage? Someone probably does. So you get someone’s play and do it. It might be terrible—but do it. And then do the next one. It will be better.”

Theater is about us. When I write a novel, I write it alone in a room and intend it for a single reader. When I write a play, I write it with invisible friends in the room—a director, actors, a designer, a stage crew—because I know that it won’t ever come to life unless it’s performed in a space which gathers others. Whom do we gather when we need others? First we gather our family; then we gather our neighborhood; then we gather our community. Nothing could be more local. I may not know how I might belong to America—it’s too sweeping a problem—but I do know how I would hope to belong to my own family. Ironically: Family drama is American drama.

For over 40 years, Salt Lake Acting Company, more than any Utah theater has engaged in local theater farming. All those years ago, founder/producing director Ed Gryska went to the grange, and when he asked them about local people who wrote shows, someone said, “Well, there’s a guy up at the University.” And Ed took the advice and came and found me. Just as he found Ron Carlson and Julie Jensen and Ken Jenks and Al Brown and Aden Ross.

The list goes on. Yes, over these same 40-plus years, SLAC has been producing plays by Edward Albee and Sam Shepard and Terrance McNalley—American writers from the larger locality; but those of us who were the local-locals have been consistently given all the attention and love and respect as the larger-locals were. As playwrights, SLAC was our home. After the Province­town Playhouse, Eugene O’Neill didn’t have a home. Clifford Odets had a home at the Group Theater but left it. Thornton Wilder once said that his home was a “hotel…. off-season.” Neither Tennessee Wil­liams nor Arthur Miller ever had a permanent theatrical home. Edward Albee’s an orphan.

But in Salt Lake, there are a number of us who’ve been able to say: SLAC was our artistic home. It’s a long list; I’ll only begin it: Tony Larimer, Anne Decker, David Chambers, Meg Gibson, Nancy Borgenicht, David Mong, Gene Pack, Gail Hickman, Michael Dorrell, Brenda Sue Cowley, Anne Stewart Mark. I need to stop, take a breath. But all of these and so many others constitute SLAC friends and family.

It’s not easy. We’re a homeless na­tion—including many of our affluent. We’re unhappy in our houses; we don’t know our neighbors; we’re out of town or unaware of community fundraisers. We’re rugged individualists—up in the air with George Clooney—disconnected…homeless. There’s a reason that, during the first nearly 200 years of our nation, America had accumulated only about a half-dozen playwrights with a significant body of work. We get nervous in public places; we distrust groups; theater often feels unnatural to us; we don’t want to cry or need in public (laughing is okay). Theater encourages us to gather; SLAC has always been the sort of theater that made its supporters feel at home.

It’s because the playwrigh Tracy Letts has been given a home at Chicago’s Steppenwolf Theater that his “August: Ossage County” went on to find a larger home in the American theater and was given a Tony Award and a Pulitzer.

SLAC folded the Brooklynite J. T. Rogers into its and Salt Lake’s community. During J. T.’s “at home” time here, he wrote (and SLAC produced) his play, “The Overwhelming,” which went on to global accolades —first at London’s National Theater and then on Broadway in New York.

Last year SLAC searched the nation for a new artistic director. Amid fanfare they hired Cincinnati’s Jason Bruffy in September—and last month, let him go. In this drama, the company itself has stepped center stage to again fulfill a legendary theater role—that of the Fabulous Invalid. The notion of Fabulous Invalid is long-standing and attempts to capture a paradox:

On the one hand, news reaches us of critical ailment; on the other hand—despite time, perhaps, in ICU —the patient is discovered full of vigor: dancing, telling jokes, compelling our attention. Hopefully—long-range—theaters like SLAC thrive. The patient battles the odds; the operation is successful; the doctor is in. Or maybe it’s the playwright.

At a moment when SLAC appears buffeted by cross-currents, I write to say: “Please: don’t be distracted by the cross-currents; watch the landmass.” In the company’s mission statement, we read a promise to “produce seasons of thoughtful, provocative, regional and world premiers; nurture, support and develop a community of professional artists; and produce and support emerging playwrights.” It sounds lofty—but it’s been lofty. Have there been fire­storms? Do some playwrights tell their “Tales From the Burn Unit”? I’m sure. Still—again and please: Don’t fix your eyes on the flames; watch the fire. It’s the same fire the Phoenix repeatedly rose from—and it’s a good one. My friend Jeff Metcalf and I always try to remind each other—at squeezed-vision moments of frustration and distraction—to “take the high road.” It’s because we believe the high road may be the only road home.

On the day I sit down to write this, I stare at a front page headline of the New York Times Arts section: “Play­wrights’ Nurturing Is the Focus of a Study.” The study, made by the Theater Development Fund, finds a critical need for theaters across this nation to do much, much more of what SLAC and Steppenwolf have been doing for close to a half century: provide a home and family-structure for writers within their communities so that those writers might write—with some sense of support—about Who We Are and Why We Need One Another.

Across America, perhaps only a dozen theaters have—for nearly a half-century—provided secure and consistent homes for local playwrights. In the larger picture—the picture of nurturing and enabling stage writers to grow into their vision and craft—SLAC has been a collaborative force in Salt Lake.

David Kranes is a novelist and playwright with over 40 plays to his credit, seven of which have been produced by the Salt Lake Acting Company. Three of these seven plays will be published in his “Selected Plays,” due out next year.

This article was originally published on January 30, 2010.